This week will see a higher-than-usual level of attention paid to Turkmenistan, which is poised to host the heads of states of the five Caspian Sea states. 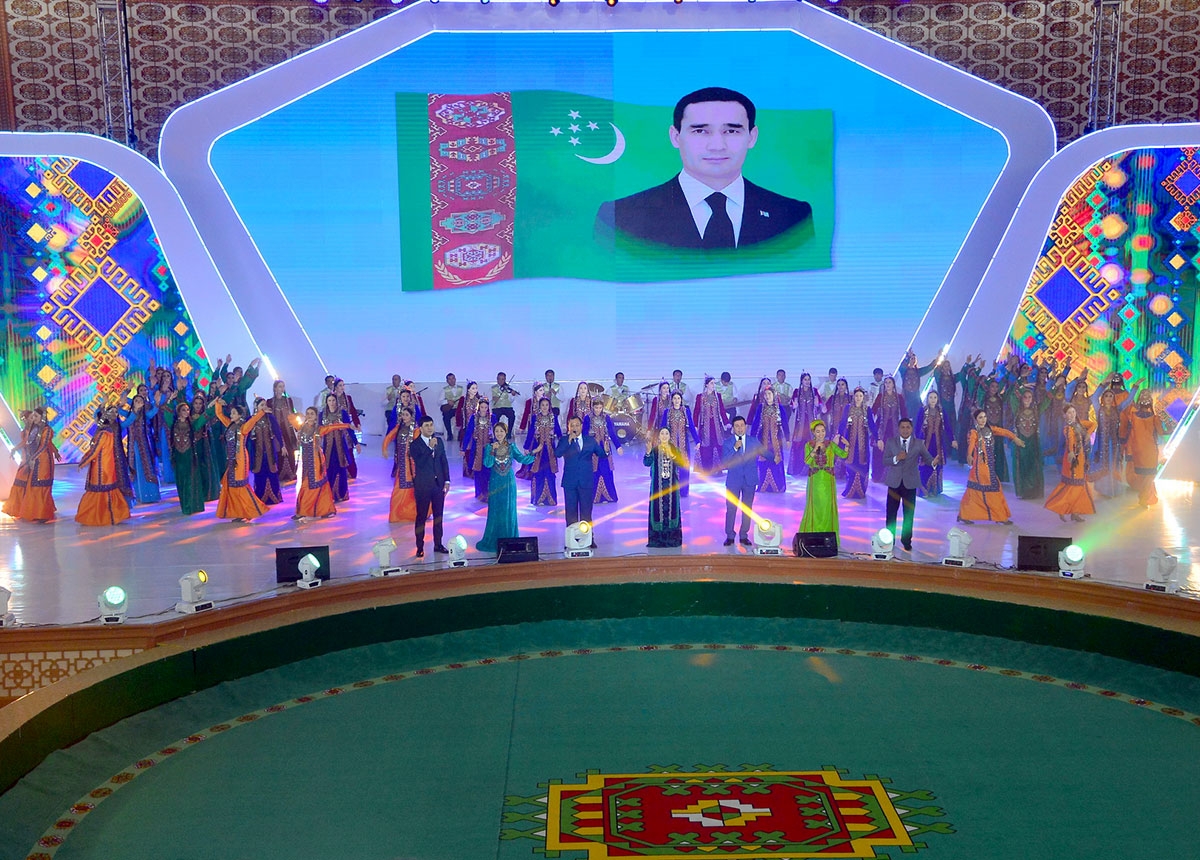 Retirement, it is said, is a good time to undertake big and exciting new projects.

Turkmenistan’s former president (and the father of the incumbent), Gurbanguly Berdymukhamedov, is committing enthusiastically to that principle.

Not a week passes that Berdymukhamedov senior is not inspecting construction operations in what will, once it is completed, become the new capital of Ahal, the region surrounding Ashgabat.

Nothing is too trivial for his attention.

On June 18, for example, Berdymukhamedov senior, who still fulfils a formally important official role as speaker of the Senate, set aside time to study road signs and address plaques so as to ensure they met his exacting standards.

Later, he proposed that the city could perhaps be furnished with clean electric buses and taxis. (Turkmenistan is deep into negotiations with KAMAZ, a vehicle manufacturer based in Russia’s Tatarstan republic, on purchasing these precise items). While inspecting the look of the sidewalk, Berdymukhamedov senior was informed about provisions being made to meet the needs of people with visual impairments.

Morality too should be considered in this new urban center. State media reported that Berdymukhamedov senior approved (in what capacity is not clear) the construction of a mosque able to accommodate up to 5,500 people at one time.

“This will contribute to the strengthening of moral principles and a compassionate atmosphere in society,” TDH news agency remarked, conveying the former president’s sentiments.

Every week it is like this. On June 14, Berdymukhamedov senior was looking at designs for manhole covers. Ten days before that, he picked out the doors for government buildings to be built in the new city.

The micromanagement is by all accounts being fueled by megalomania. As RFE/RL’s Turkmen service, Radio Azatlyk, reported last month, there are strong suggestions afoot that the yet-to-be-named city will be dubbed Arkadag, the Ozymandian honorific title meaning “patron” that the public is made to chant in unison whenever Berdymukhamedov is out and about.

Construction of Arkadag, if that is what it is to be called, is slated for completion later this year. Once the city is finished, it should be able to accommodate up to 13,000 families. The total cost of all this is a mystery, but it is probably safe to assume many hundreds of millions of dollars have been splurged.

While Berdymukhamedov the father has kept himself busy, Berdymukhamedov the son has reportedly been taking it easy. Amsterdam-based Turkmen.news reported on June 22, citing unnamed sources, that the president flew out of the country on June 21 on a top-secret assignation with a team of doctors in Munich, Germany. The website drew on other circumstantial evidence to prove its assertion. Namely, that Berdymukhamedov did not appear on the daily evening television news on June 21, a Tuesday, when he normally holds one of his typically well-covered government meetings.

Turkmen.news does not speculate about the specific reason for the trip, but it is probable, if the report is accurate, that Berdymukhamedov is like his father in not trusting local doctors and preferring the attention of foreign specialists.

It seems a little rich that the president has been able to fly with abandon hither and thither when people in Turkmenistan have until recently languished under persisting COVID-19 travel restrictions. This is fast changing, however.

One local news website reported that twice-weekly scheduled flights between the Turkmen cities of Ashgabat and Turkmenbashi to the Russian capital, Moscow, are expected to resume on July 1. Routes to Dubai and Kazan are already up and going. Flights to Germany are also in the works.

Concessions are being made for a select group of the faithful too.

On June 23, President Berdymukhamedov signed a decree allowing 275 people to perform the hajj pilgrimage to Mecca between July 2-22. That number is of note in that it is quite a bit higher than the 160-pilgrim quota that the government had in place prior to the COVID-19 pandemic.

One thing that is going nowhere anytime soon is the trans-Afghan TAPI natural gas pipeline that Turkmenistan is so eager to see built. It is true that the Taliban regime has insisted that building work will resume within the coming four months, but with what money? The only solid funding to date had come from the Asian Development Bank, or ADB, but as a Pakistani energy official noted in March, that lender paused its involvement in TAPI until such time as the Taliban regime in Kabul achieves international recognition.

Ashgabat is not losing the faith, though. Earlier this month, Artur Andrysiak was installed as the new ADB country director for Turkmenistan. On June 23, Andrysiak met with Foreign Minister Rashid Meredov and, inevitably, the topic of TAPI came up. Whether any of this means that the ADB is mulling a shift of position is not for the public to know, however.

Energy cooperation with the Chinese is more predictable. Speaking at a June 24 government meeting, Shakhym Abdrakhmanov, the deputy prime minister with the portfolio for oil and gas sector affairs, debriefed the president on preparations to award a contract to China’s state-owned Sinopec Group for the provision of specialized services to increase productivity at the wells of Turkmenistan’s state oil company, Turkmennebit.

The week coming will see a higher-than-usual level of attention paid to Turkmenistan, which is poised to host the heads of states of the five Caspian Sea states, which also comprise Azerbaijan, Iran, Kazakhstan and Russia. The sixth Caspian states summit in Ashgabat on June 29 will mostly garner international attention by virtue of the presence of Russian President Vladimir Putin, who will be traveling to Turkmenistan after an overnight stay in Tajikistan. This is his first foreign trip since the start to the war in Ukraine.

The summit should be important news in its own right, in theory. The last gathering, which took place in August 2018 in Aktau, Kazakhstan, culminated in the signing of the long-awaited convention on the legal status of the Caspian Sea. Some read that development as opening the way to Turkmenistan finally pursuing its ambition to build – or have somebody do it for them, to be more precise – a trans-Caspian gas pipeline. This route would enable Ashgabat to get its fuel to buyers in Europe.

But not so fast.

Analyst Azad Garibov laid out the persisting predicament with commendable clarity in a June 2019 paper.

“Article 14 of the Convention states that ‘the parties can lay underwater pipelines along the Caspian floor’ (Section 2) ‘according to consent by the parties through whose sector the cable or pipeline should be built’ (Section 3),” Garibov writes. “However, the same section of the Convention also stipulates that such activities hinge on ‘the condition of the accordance of their projects with ecological requirements and standards.’”

This means that any one of the littoral states will be able to play the environmental impact trump card if they really want to delay construction of TCP, Garibov concludes.

Russia has historically been the main spoiler on this front.

So, when Berdymukhamedov states, ahead of the summit, that that Turkmenistan “consistently advocates for … effective implementation of the Caspian region’s huge resource, transport, transit, energy and industrial potential,” but then talks about how Ashgabat also attaches great importance to the “ecology and environmental protection,” it is likely this predicament to which he is alluding.

This may be a propitious time.

Russia is desperately in need of friends and has been on a charm offensive with Turkmenistan for several years now. In any case, while Kremlin intransigence used to make sense since Turkmenistan once stood to undercut Russian gas sales, the situation has changed dramatically with Europe now desperately working to wean itself off Moscow’s gas.

Iran is likewise on a full-blown Central Asia-focused diplomacy bender, and enabling a Caspian breakthrough could well advance that agenda, as well as win it brownie points in the West.