Turkmenistan: A digit in every pie

Hair-raising accounts of Turkmen healthcare, billions spent on the private sector, and a plan for ex-presidents. This and more in our weekly Turkmenistan bulletin. 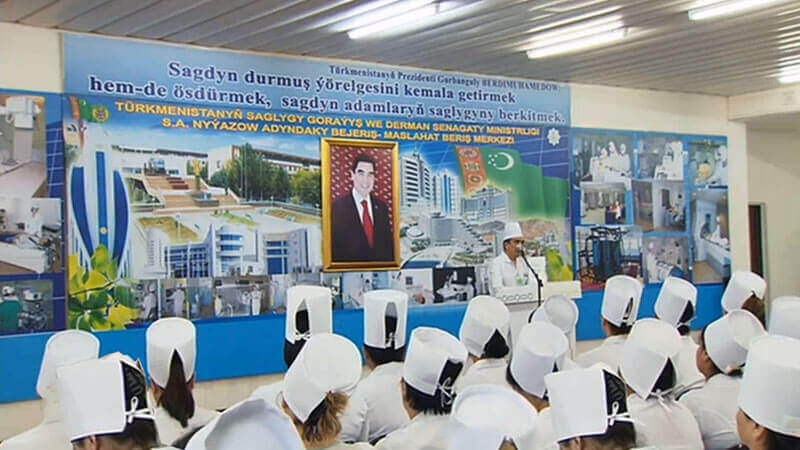 A dozen or so Uzbek TV stations earlier this month disappeared from the roster of channels carried by Turkmenistan’s telecommunications satellite, TurkmenAlem.

The prevailing theory is that this happened after one privately owned Uzbek station, Sevimli TV, aired the Netflix-produced movie 6 Underground, which is partially set in a dictatorship bearing some very loose similarities to Turkmenistan. Sevimli TV is not even carried by the satellite transmitter, but it looks like Turkmen officials wanted to play it safe.

This episode speaks volumes about the extent of the Turkmen state’s information-throttling agenda. And it suggests that when Industry Minister Serdar Berdymukhamedov (the son of the president) went to St. Petersburg on February 20 to discuss cooperation in developing his country’s IT sector, it was not with the goal of broadening the access of Turkmen citizens to the outside world.

The implementation of digital technologies has become President Gurbanguly Berdymukhamedov’s latest idée fixe – all part of his 2019-2025 digital economy development roadmap. His notion is to nudge Turkmenistan’s bureaucratic machine toward a system of electronic document management.

The Ahal province, of which Serdar Berdymukhamedov was governor until earlier this year, was apparently the first to begin this bold transition. On February 20, the president heard how the Textile Industry Ministry is following suit by creating its own digital technologies department.

The government describes this all as modernization, although consultants across the world know full well that government IT projects, when maladministered, are a byword for overspending and chaos. The private companies drafted in to do the work will make off like bandits, however.

For Berdymukhamedov, it is all about the private sector these days. A state news agency report on the February 20 Cabinet meeting reminded readers of just how much money the government is filtering through the Union of Industrialists and Entrepreneurs, or UIET, the parastatal entity charged with transforming Turkmenistan into a free market economy. There is $1.5 billion for the new city in the desert being built outside Ashgabat. Another $2.3 billion is earmarked for the Ashgabat-Turkmenabat highway. Just $600 million is going to construction of a mining facility at the Tyubigatan potash deposit in the Lebap region.

“And these are just some examples of targeted support for the development of entrepreneurial activity,” the report noted.

It is understood, thanks to the reporting of outlets like Amsterdam-based Turkmen.news, that two of those projects – the city-building initiative and the highway – are directly benefitting the president’s family.

Next in line for the private sector treatment are the railways. Baku-based Trend news agency reported on February 21 that an open joint-stock company called Demiryollary has been formed to take over the functions formerly fulfilled by Turkmendemiryollary, or Turkmenistan Railways. These included, incidentally, running two hotels in the Awaza resort on the Caspian Sea. This rearrangement is being sold as a bid to attract more private investment. As a transit nation for goods traveling by railroad from China to the Persian Gulf or across the Caspian Sea, Turkmenistan presents a potentially interesting proposition for investors. But the Turkmen government likely has cronies, not nosy foreigners, in mind for the time being.

It is not just the economy going through transition. The government on February 24 published new details of proposed changes to the constitution that will, among other things, allow for former presidents to take a seat in the soon-to-be-formed upper house of parliament. Given how solidly 62-year-old Berdymukhamedov is entrenched, it feels modestly surreal seeing almost a whole page on a Turkmen government website dedicated to the mechanism for removing a president from power – it requires a two-thirds vote in both chambers of the legislature – and what should happen if a leader eventually leaves office.

But the regime clearly has its eyes set on the future.

State television expends inordinate amounts of time trying to prove how hale and hearty is the president, such as this week, when he went for a quick ride at the Akhal-Teke presidential equestrian center. But it will not be easy after last year’s disappearing act to shake lingering suspicions that the president is hiding some secret medical condition.

All this constitutional rejiggering could, therefore, be read in one of two ways. Either the authorities are advising the public (and their enemies) that there is a fleshed-out Plan B in the event of Berdymukhamedov’s sudden death or incapacitation. Or a gradual transition plan is in place for the president to ride off into the sunset, invariably making way for his son, Serdar.

At least if the president were to fall ill, he would get the best medical treatment money could buy. That is more than can be said for the rest of the population, as Turkmen.news documented in a piece published on February 24. The article offers hair-raising accounts about the chronic incompetence of front-line hospital staff incapable of diagnosing even basic complaints, often with potentially lethal outcomes. One patient brought into an Ashgabat hospital with agonizing appendix-related problems was initially identified as being pregnant. It took hours before the real cause of the pain was identified.

Turkmen.news was eager to point that while there are many good and professional doctors in Turkmenistan, the state of healthcare across the board prompts many people to seek treatment in countries like India, Russia, Uzbekistan or Turkey.

Anybody needing to go to some parts of Russia this week would have been in a tight spot though. Trend reported that Turkmenistan Airlines canceled flights from Ashgabat to Kazan and St. Petersburg for February 20-27 over unspecified technical concerns. Turkmenistan had already previously suspended flights to China over the coronavirus scare.

Turkmenistan Airlines did, however, resume flying to the United Arab Emirates this month – it had temporarily stopped services because of international tensions over Iran. Just as well, as this was the week that the Turkmen government went on the road in Dubai to lobby for deep-pocketed funders to cough up cash for its Turkmenistan-Afghanistan-Pakistan-India, or TAPI, natural gas pipeline. The Turkmen state news agency said 100 companies from 40 countries would be attending the two-day roadshow, which was to end on February 25.