Ecological conservation is a matter of pride in Turkmenistan. But a disconnect between rhetoric and reality is a hallmark of the Berdymukhamedov era. 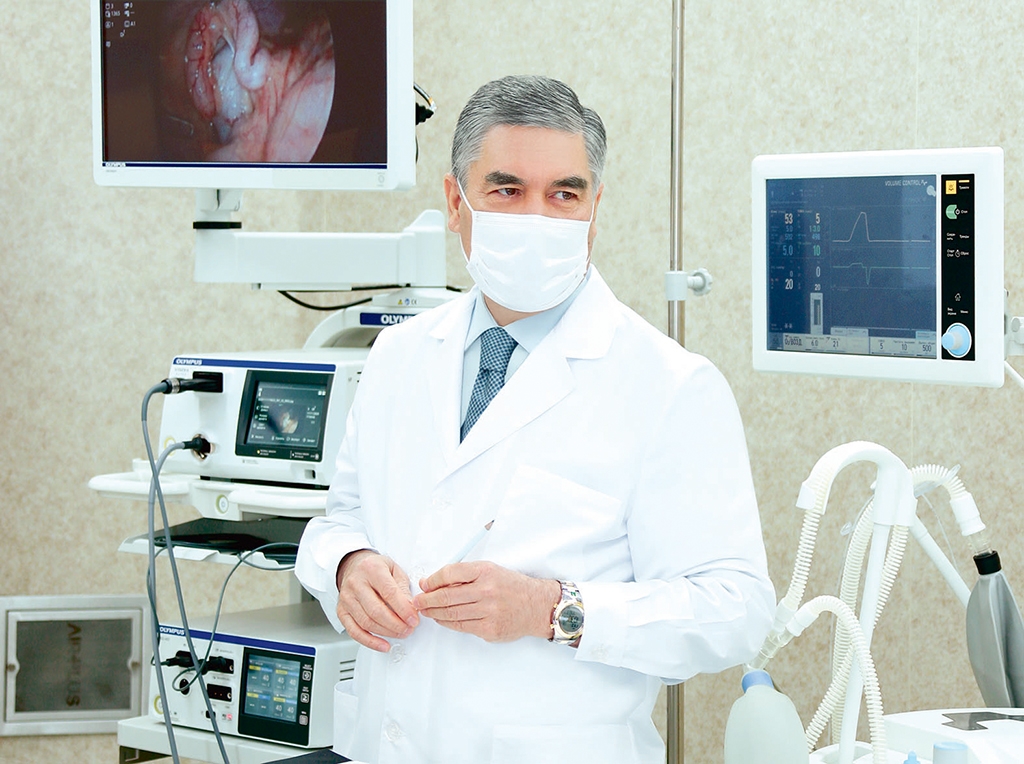 It hasn’t been since the president was rumored to be dead that Turkmenistan has earned this much international attention. And all it took was unveiling a gold-leafed statue to an Alabai shepherd dog.

Not everyone was amused by the derisive tone of much of the coverage, however.

Tatjana Rosen, a technical advisor to the United Nations Environment Program, instead dwelled in a Twitter thread on what she deems to be the positive steps taken by Turkmenistan to preserve its ecological balance. And the Alabai deserves praise for contributing to this, she argues.

Parliament earlier this year approved the country’s accession to the Bonn Convention, an international agreement that notionally commits signatories to adopt any necessary action to protect migratory species passing through their habitat. Lawmakers agreed to adopt the African-Eurasian Migratory Waterbird Agreement at the same time.

Other countries, such as the United States, Canada and Russia, have declined to do the same, Rosen wrote.

This year, Turkmenistan also signed up to the Nagoya Protocol to the UN Convention on Biological Diversity, which is intended, as the title suggests, to safeguard biodiversity through a combination of protective obligations and resource-sharing commitments.

As followers of President Gurbanguly Berdymukhamedov’s book-writing career will know, floral diversity is a matter of some pride in Turkmenistan. It was only in October that the Academy of Sciences was presenting the 12th volume of the president’s encyclopedic work “Medicinal Plants of Turkmenistan.” The Foreign Ministry has boasted elsewhere of how “the biological diversity of Turkmenistan includes at least 20,000 species, including more than 7,000 plant species” and “about 13,000 species of animals, of which 777 [are] vertebrates.”

Among those animals, said Rosen, are the world’s second-largest population of Persian leopards and the famously photogenic Pallas’s cats. And the function of the Alabai, she states, is that the breed can, through its protective sheepdog instinct, minimize potential harm to the environment by minimizing interaction between humans and wildlife.

“The president’s promotion of the breed does a service to the breed and indirectly to conservation,” Rosen writes.

Which makes it all the more distressing to hear stories from the border town of Serhetabat about local authorities going on a shooting spree of presumed stray dogs, some of which, according to sources cited by Amsterdam-based Turkmen.news, were Alabais.

Indeed, while Berdymukhamedov casts himself as a devoted animal-lover, very often posing for TV footage while riding horses, sometimes seen hanging around Alabai, and on one occasion, at least, filmed manhandling kittens, the country’s record on animal welfare is not impressive.

The capital, Ashgabat, has seen multiple waves of the kind of cruel animal culls reported in Serhetabat. Family pets have often been caught up in the indiscriminate clubbings and poisonings. Animal rights activism is just another area of advocacy that can earn practitioners state-sponsored intimidation.

This disconnect between rhetoric and reality is a hallmark of the Berdymukhamedov era. The handling of the coronavirus crisis provides another example.

On November 13, the president oversaw the ceremonial opening of a 200-bed infectious diseases hospital. The site chosen for this facility was Yzgant, in the Ahal province, which happens by chance to be the Berdymukhamedov family’s ancestral village. In typical form, the president was shown on state television inspecting all the hospital’s brand new and expensive equipment.

The hospital will be qualified to treat all manner of ailments, including tonsillitis, intestinal infections, jaundice, hepatitis and even “dangerous infectious diseases transmitted by airborne droplets,” the TDH state news agency reported.

Not COVID-19, though, because Turkmenistan supposedly has no cases.

"As a result of our preventive measures, no cases of coronavirus have been registered in the country so far, which is … our great achievement,” Berdymukhamedov boasted after opening the Yzgant clinic.

That this is a logic-defying lie is now beyond obvious.

RFE/RL’s Turkmen service, Radio Azatlyk, routinely tells another story. On November 9, Azatlyk reported that 274 people repatriated from the Russian republic of Tatarstan tested negative for the coronavirus upon arrival, only for seven of them to return positive results 10 days later. This either suggests the initial screening failed to catch the cases, or that the group fell ill once inside Turkmenistan.

The hospitals that Berdymukhamedov is not visiting are clearly unfit for purpose. Radio Azatlyk has reported on how villagers in the Lebap and Dashoguz provinces are avoiding hospitals altogether, since they are so desperately lacking in basic resources. In one hospital in the Darganta district of Lebap Province, patients are expected to bring their own firewood and blankets to stay warm, as well as their own food, the broadcaster reported.

Speaking to Netherlands TV news program RTL Nieuws, Turkmen.news editor Ruslan Myatiev said he had reliable information that 41 people in Turkmenistan at the very least have died with COVID-19 to date. Myatiev suggested, however, that the real number is most probably much higher.

Turkmenistan is bracing this coming week for some unusually chilly weather, which may only compound this unacknowledged problem as households huddle inside for warmth.

Change may be afoot at the top though. Turkmen.news has cited sources it describes as being close to the president’s office as saying that Berdymukhamedov’s son, Serdar, is poised to leave his job as Industry Minister. The thinking has for a while been that the younger Berdymukhamedov will eventually be guided toward chairmanship of the upper house of parliament, which is to come into being next year. This job would be of enormous symbolic importance as it would place Serdar Berdymukhamedov in prime position of succession to the presidency.

But the Turkmen.news source suggests that since the Senate will not convene until 2021, a leading post in the Supreme Chamber of Control may prove a more likely fit for the time being. That is a body the president relies on to audit and investigate how public funds are spent.

The path to leadership in that department has certainly been smoothed. Durdyly Durdylyev was fired as chairman last month for allowing, as the president stated, “serious shortcomings in his work.” His replacement, Rejep Charygulyev, may or may not be a seat warmer.