Turkmenistan: A People’s Council of despair

Turkmenistan’s legislation factory, hosting an international shindig, and worrying news for farmers. This and more in our weekly Turkmenistan bulletin. 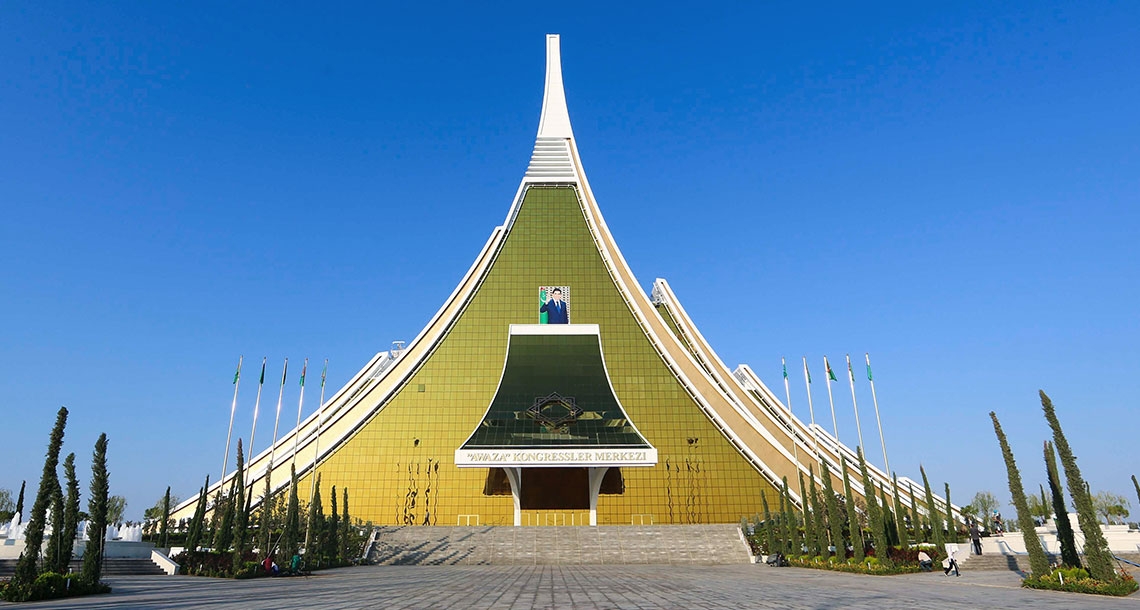 August is back-to-work month in Turkmenistan.

Done with his summer frolicking, President Gurbanguly Berdymukhamedov reverted to a more conventional apparel, a graphite gray pinstripe suit, for his video conference with regional governors on August 5.

A chunk of this meeting was devoted to plans for the upcoming Khalk Maslahaty, or People’s Council, due to take place on September 25, a couple of days before Independence Day. This event is highly photogenic for the strong attendance of robed elders in flowing white beards, but its monolithically consensual procedures fly in the face of all that a representative body is supposed to be.

The Khalk Maslahaty was disbanded in 2008 – around a year after Berdymukhamedov came to power and when there were still hopes he might be a democratizer in the making – but was then reformed in October 2017. Of late, its most notable function had been to lend the imprimatur of legitimacy to unpopular policies, such as the scrapping of free utilities to much of the population.

This is not to say that parliament is without its formal significance. The chamber is quite the legislation factory, in fact. Mejlis chairwoman Gulshat Mammedova told the president that the parliament had over two plenary sessions adopted 55 documents, including 31 laws and 24 decrees. Mammedova also claimed that further legislation is in the works to “energize democratic processes.” It is not quite clear who Ashgabat is trying to impress or hoodwink with this kind of talk.

The most pressing upcoming appointment, however, will be the much-trumpeted Caspian Economic Forum, which is slated to take place August 11-12 at Turkmenistan’s Awaza tourist zone. Various related business will be unfolding on either side of that date.

Russia will be earning itself some major brownie points by dispatching Prime Minister Dmitry Medvedev to take part in the proceedings. Much to the interest of those people keeping tabs on Berdymukhamedov’s physical wellbeing, a meeting between the pair is planned, which could provide rare visual access to observers outside the Turkmen leader’s innermost circle.

Although the Russian government caused Turkmenistan much heartache in 2016 by walking away from a long-term natural gas delivery agreement, things appear far more positive these days. Gas deliveries have resumed, albeit in smaller volumes than before. And this will be Medvedev’s second visit to Turkmenistan in only three months. The Russian premier swung by Ashgabat in late May, ostensibly on a goodwill mission to assure his hosts of Moscow’s efforts to maintain good neighborly relations. Medvedev even received the gift of an alabai puppy for his troubles. Berdymukhamedov is all about alabai dogs at the moment and has even just finished “writing” a book about them.

The Caspian Economic Forum is bad news for holidaymakers though. Amsterdam-based Turkmen.news (formerly Alternative News of Turkmenistan) has reported that multiple hotels in the Awaza resort closed their doors to locals from August 5 and will continue to do so for 10 days, while foreign visitors will be given priority. That period falls well outside the dates of the actual forum.

Turkmens may not like it, but they should be used to the total breakdown between supply and demand by now. Many continue to be troubled by the lack of access to cash.

Vienna-based Chronicles of Turkmenistan reported on August 5 that lines of several hundred people appear before ATMs in Ashgabat from the morning. The lack of cash grows especially acute at the weekend. Because of the shortage of liquid funds, people were only able to cash out salaries (which are paid onto bankcards) for June by the end of July, Chronicles reported.

A Turkmen.news source in the Mary region described even more dramatic scenes at ATMs.

“People curse each other, they use foul language, they fight and are willing to kill one another if somebody tries to jump the queue,” the source said.

Some people may struggle to get paid even on paper. RFE/RL’s Turkmen service, Radio Azatlyk, reported on August 5 that the government has come up with a creative new way of ensuring that households pay their bills. State employees will not get their salaries unless they provide documents proving that they have no arrears on their electricity, gas and water bills. As Azatlyk’s informant has noted, however, getting this documentation can be a time-consuming process, which presents the real prospect of government workers going without pay for weeks or months.

Authorities began to install meters to measure consumption of gas, electricity and water – in line with the decision approved by the Khalk Maslahaty – in the fall of 2018. Enforcement of bill payment is patchy and will likely remain so until the population fully assimilates the idea that essential utilities are no longer state giveaways. In Turkmenabat, the country’s second-largest city, by the Uzbek border, notices have cropped up in public buses warning that failure to pay for electricity in good order could result in suspension of service and a summons to court.

Turkmens have also over the past couple of years experienced chronic deficits of staple groceries. A decree adopted by the president this week portends possibly worrying news on this front. In something of a non sequitur, TDH news agency asserted that “bearing in mind the fact that food security has been attained in the country, the area of land to be sown with wheat for next year’s crop is to be reduced.”

The same land will instead be converted into cotton fields, as part of an agenda to boost exports. It would not be an overstatement to describe farmers working in cotton fields in Turkmenistan as latter-day indentured serfs, toiling for survival pay, at best.

Reading between the lines of this decree, it means that there will be less domestic flour available for sale and that more of the nation’s precious irrigation resources will be redirected to watering a thirsty crop that is, by the by, also the source of an untold number of accounts of human rights violations.