All this Russo-Turkmen intimacy will only consolidate an existing state of affairs. Our weekly Turkmenistan briefing. 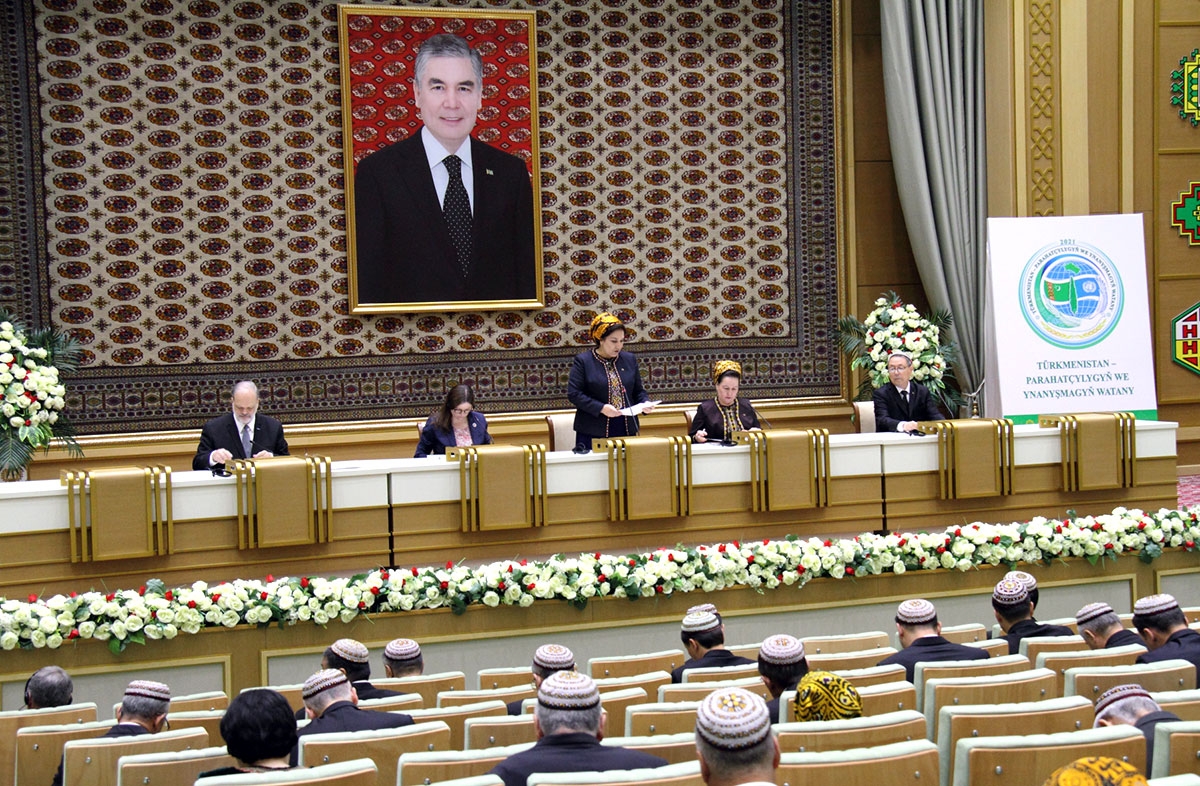 Otto von Bismarck’s old saw about how “if you like laws and sausages, you should never watch either one being made” does not really apply in Turkmenistan. The laws bit, at least.

It is not as if anybody has the option of scrutinizing the process after all. Legislating is as opaque a business as any other matter of government.

And yet, some ostensibly important areas of policy are initially subjected to cursory parliamentary scrutiny before being enacted into law. In late April, the Mejlis, the lower house of the now-bicameral parliament, even created its own website, although it has already contrived to be disastrously out-of-date.

Parsing scanty reports in state newspapers and websites is accordingly the only way to get a sense of what is happening in this sleepiest of legislatures.

It is perhaps telling that what occurred on May 22, to borrow the formulation of government chronicles, was only the 14th session of the sixth convocation of the Mejlis. That is to say that lawmakers have only met for a plenary session that number of times since the March 2018 election – roughly once every 80 days.

A key order of business was approving an important plank of presidential policy. Namely, the swift and cursory adoption of a law regulating the operation of public-private partnerships. One stated goal of this law is to “attract extra-budgetary funds” for projects and the construction of infrastructure.

Now, few genuinely private-sector investors anywhere in the world would even think of willingly sinking their cash into the kinds of white elephants littering Turkmenistan, but thinking in these terms may be missing the point. The likely intent of such legislation is not to privatize the spending of money, but to privatize how it is earned.

So it is legitimate to expect crony-controlled enterprises to start receiving loans on favorable terms in a ludicrously overvalued local currency so that they can enter state-dominated export-oriented industries and then make bank. Revenues that once accrued to the state coffers will instead end up in private pockets. This could make for a virtuous circle in an accountable system where the private bit of public-private partnerships is expected to pull its weight, but for a potentially vicious one where no such accountability exists.

Where it comes to foreign investment, meanwhile, Russia is very much soup du jour. The charm offensive leveled by Moscow at the presumed future Turkmen ruler, Serdar Berdymukhamedov, the 39-year-old son of the incumbent President Gurbanguly Berdymukhamedov, is yielding fruit.

At a May 21 cabinet meeting, the younger Berdymukhamedov, a deputy prime minister, presented a draft program on Russo-Turkmen intergovernmental economic cooperation for 2021-2023. The roadmap covers planning for cooperation in industry, energy, agriculture, high-tech and finance, among other areas.

The older Berdymukhamedov summarily approved the program and instructed his son to act as point-man on ensuring its implementation.

Moscow has got its hooks well into Serdar, who has been a regular visitor to Russia of late – once to sit on the sidelines of a Commonwealth of Independent States ministerial council on April 2 and then again in late April to attend a Eurasian Economic Union forum in Kazan. This will prove a valuable Russian investment for when (or if) Serdar ends up taking over the country.

Russian courting continued on May 23, when the younger Berdymukhamedov and Foreign Minister Rashid Meredov met in Ashgabat with a delegation of officials and businesspeople from St. Petersburg. Two companies from the northern Russian city looking to make more serious inroads are infrastructure giant Vozrozhdenie and the state-run United Shipbuilding Corporation. Vozrozhdenie has been operating on the Turkmen scene for more than a decade and is currently working on a mudflow-prevention structure in southern Ashgabat, which has been ritually afflicted with this natural calamity in recent years.

The shortest way to Berdymukhamedov’s heart is, of course, through his ego. And the Russian Embassy duly obliged by organizing an event to present a Russian-language translation of the president’s latest book: “The White City of Ashgabat.”

A Turkmen news agency report on this event did not explicitly state that the Russians had produced the translation, but this seems probable and in line with a custom established in the days of the late President Saparmurat Niyazov, whose comically incoherent spiritual tome, the Rukhnama, was translated into multiple languages by courting investors. “Thus Turkmenistan has acquired dozens of translations of the book and then uses these translations – regardless of their quality – to teach foreign languages to students at the Azadi World Languages Institute,” as one Wikileaks-obtained U.S. State Department cable from 2006 wryly notes.

All this Russo-Turkmen intimacy will in truth only consolidate an existing state of affairs. Russia is a favored partner on many fronts. At that same May 21 cabinet meeting, Shakhym Abdrakhmanov, who was in February appointed a deputy prime minister with the portfolio for the oil and gas industry, talked about the purchase of new pipes for a gas turbine power plant under construction. The pipes are to be bought from Moscow-based TMK and Gazprom’s Swiss-based trading arm.

If Ashgabat was not so hell-bent on its autarkic mission, it might even consider turning to Russia for more food in urgent times of need. Instead, the country remains blighted by sudden Soviet-style shortages. RFE/RL’s Turkmen service, Radio Azatlyk, reported on May 20 that a decision by authorities in the Lebap province to seize 10 tons of cotton seeds precipitated a sudden shortage in the supply of raw materials for cottonseed oil and the consequent closure of the province’s oil factory. This has predictably led to a spike in the price for this basic commodity.

Rather than address the supply problem in state stores, the authorities are adopting ever craftier methods of ensuring that members of the public do not capture shaming photographic evidence of lines of desperate shoppers. One such measure is to have bread delivered to stores at the end of the working day, so as to avoid the crushes that ensue when these trucks appear.

This is still not enough to avoid unseemly scuffles, however. An Ashgabat-based correspondent for Azatlyk reported on a brawl on May 20 outside a store near the city’s school No.18.

“A crowd of residents who wanted to buy food immediately formed around the truck, which led to commotion and fuss. A massive brawl broke out, so the truck with the food left the scene and people were left without food,” the correspondent noted.