Russia is proposing a major reconfiguration of the Central Asian gas market. Our weekly Turkmenistan briefing. 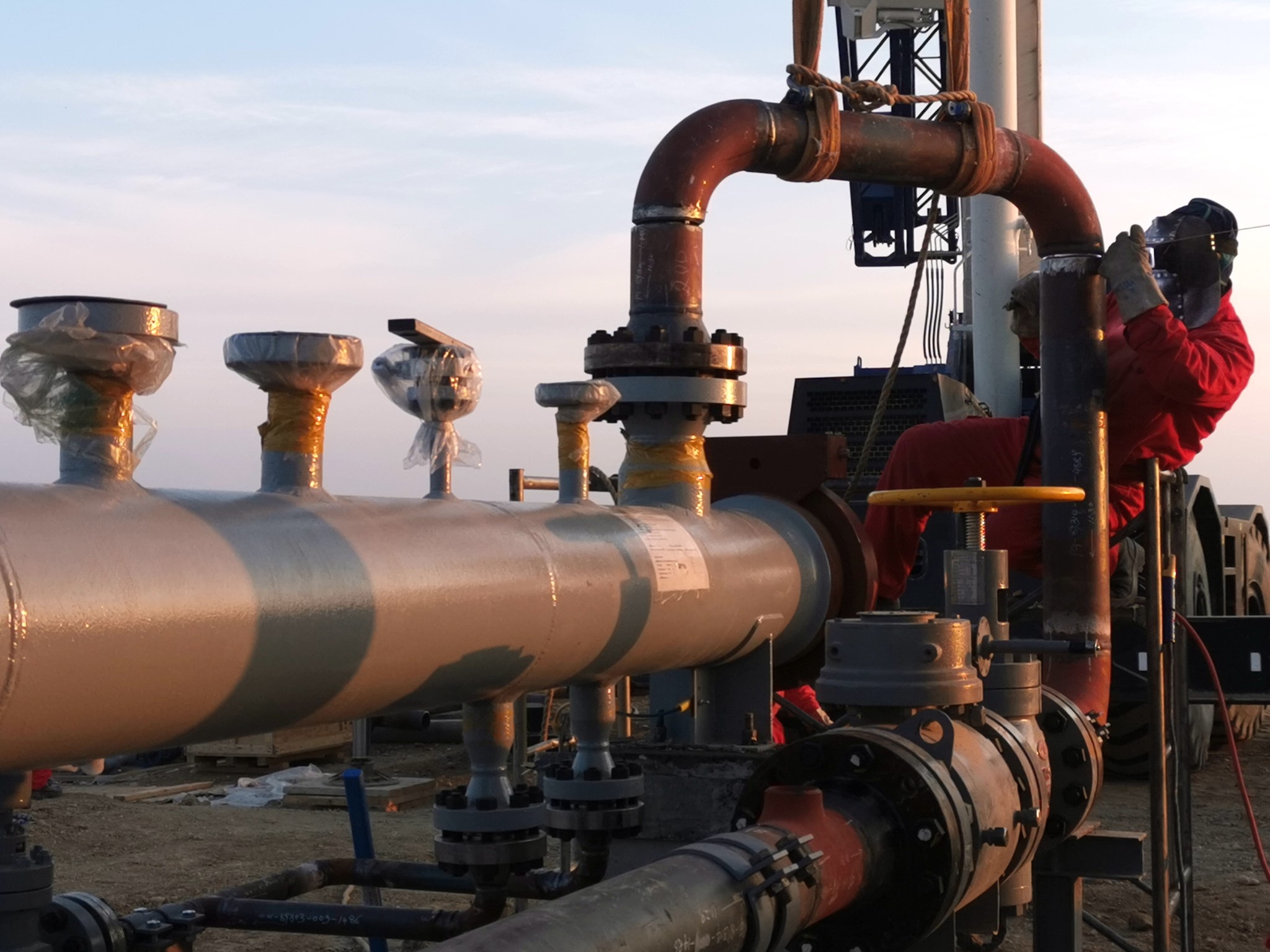 Turkmenistan’s vision for a trans-Afghan gas pipeline to Pakistan and India may be given a fillip in the most convoluted of manners.

With Europe steadily drawing down its purchases of Russian gas, Moscow is starting to get a little more creative in how it sells its fuel.

In late November, Russian President Vladimir Putin and his Kazakhstani counterpart, Kassym-Jomart Tokayev, reportedly discussed the creation of a “tripartite gas union” also comprising Uzbekistan. Although Kazakhstan and Uzbekistan have considerable gas reserves of their own, they have been caught short by surging demand, so the idea is for shortfalls to be plugged with Russian imports. The suggestion is still firmly on the drawing board, but industry experts are now talking up ways this arrangement could be extended further.

In an interview with Russian state-run news agency TASS, Alexei Grivach, the deputy head of the National Energy Security Fund, a Moscow-based think tank, suggested that once gas is being pumped down to Kazakhstan and Uzbekistan, it would also make sense to look at buyers in Pakistan and India. Doing that would entail building new pipelines, either from Uzbekistan into Afghanistan, or piggybacking on the trans-Afghan TAPI project.

All these ideas are impossibly hazy for now, and they take little heed of current and future infrastructural constraints, but they may be considered by a Turkmenistan that is struggling to find immediate sources of funding for TAPI.

The kinds of conversations taking place among officials in Russia, Central Asia and Iran make it evident a major reconfiguration of the regional gas market is in course.

On November 28, Iran’s IRNA state news agency reported on how Russia had agreed in principle to supply Iran with gas for onward delivery to Pakistan. Moscow has committed as an extension of that arrangement to build the pipelines between Iran and Pakistan that would be needed to carry out those deliveries. Russian gas would arrive in Iran either via Azerbaijan or Turkmenistan, IRNA reported, without making it clear where it was sourcing its information.

A future Iran-Pakistan pipeline could notionally provide uncomfortable competition to TAPI, though, so it remains to be seen how much Turkmenistan will be prepared to assist with any of this.

That said, other developments indicate that Ashgabat for now sees only virtuous outcomes in dealing with Tehran on energy questions. Indeed, just to further complicate matters, Turkmenistan and Iran are separately far into discussions on how to boost deliveries of gas from the former to the latter – all part of a swap agreement with Azerbaijan. On November 30, Iranian Energy Minister Ali Akbar Mehrabian met with Turkmen President Serdar Berdymukhamedov for talks in Ashgabat. No firm details about the exchange were disclosed, but the Turkmen government website cited Berdymukhamedov talking approvingly about “favorable opportunities … in the area of energy transport and transit.”

The Taliban regime in Afghanistan, meanwhile, is eager to get TAPI up and going as soon as possible. The soi-disant Islamic Emirate’s mines and petroleum minister, Shahabuddin Delawar, made the point forcefully in a Kabul meeting with the Turkmenistan-based head of the TAPI consortium, Muhammetmyrat Amanov, Afghan news outlet Ariana reported on December 1.

“Since Afghanistan is in a good security situation, we should utilize this opportunity and start the practical work of the TAPI project as soon as possible with the cooperation of Afghanistan and Turkmenistan,” Delawar was quoted as saying.

And the westward direction cannot be forgotten either. Exporting gas that way will require the active involvement of Azerbaijan and Turkey. As it happens, a date has now been set for a three-way heads of state summit: The leaders will meet on December 13-14 in the Caspian resort town of Awaza.

President Berdymukhamedov took time out of his schedule on December 3 to pop down to Qatar to watch the Netherlands beat the United States 3-1 in the second round of the World Cup. So as to make the trip look like something more than it was – the president taking a quick break at the weekend – the government website published a lengthy article arguing how this served as fresh evidence of the importance placed by authorities on sports and physical wellbeing. While in Doha, Berdymukhamedov met with Gianni Infantino, the head of FIFA, soccer’s global governing body. Official accounts do not relate whether the men discussed their shared indifference to human rights.

Leaving aside its cataclysmic, obfuscation-driven response to the COVID-19 pandemic, Turkmenistan does at least try to live up to its word on matters of health.

According to a November 29 note on the government website, excise fees on imported and locally manufactured alcohol and tobacco products are set for a steep rise. The stated purpose of the hike is to protect the health of Turkmen citizens. What is more, the lower age limit for buying cigarettes has been raised from 18 to 21.

Last week, law enforcement agencies corralled lawmakers, government officials, journalists, health workers and community leaders into a now-traditional ceremonial burning of confiscated narcotics and smuggled cigarettes. The biannual public burning of the cigarettes has been taking place since 2016, and people attending the ceremony are said to be allowed to join in by throwing items into the furnace under the attentive scrutiny of security officials.

The Turkmen government is concerned that information about the country’s achievements is not being adequately disseminated around the world. Foreign Minister Rashid Meredov proposed a solution to that problem during the December 2 Cabinet meeting. He suggested that Turkmenistan set up an “International Information Center” to be sited within the State Committee for Television, Radio Broadcasting and Cinematography. Its job will be to produce documentaries and other video material that could then be broadcast on foreign media outlets.

The experience of other countries in the region shows that such exercises are largely pointless vehicles for wasting and possibly purloining government funds. There is little to suggest that Turkmenistan will be any exception.

Ashgabat’s efforts to promote its accomplishments on the international stage have to date been to a considerable extent focused on racking up entries in the undeniably ludicrous Guinness Book of Records. That is how it has come to pass that Turkmen feats such as installing the “most fountain pools in a public place” and holding the “largest cycling awareness lesson” sit alongside the Ramos Gomez family in Mexico being recognized as the world’s “largest hairy family” and Japanese videographer Chisato Tanaka eating 72 baked beans with chopsticks in one minute.

The former president (and speaker of the Senate and father of the current president), Gurbanguly Berdymukhamedov, is too oblivious to be embarrassed. On December 3, he spoke at a meeting devoted to the new capital of the Ahal region, construction of which is now nearing completion, about how the city will be the first “smart” urban center of its kind in Turkmenistan. The city will teem with electric buses and cars, solar panels, wind turbines, and “smart” parking, Berdymukhamedov senior said.

“Given the fact that this will be the largest, most unique and beautiful city in the region, Foreign Minister Rashid Meredov should … study the issue of entering this object into the Guinness Book of Records,” the former president suggested, without explaining which exact record the still-unnamed city would be setting.