Turkmenistan: A shining city on the steppe

A new budget light on details, the president’s son plays architect, and critical heating infrastructure remains ignored. This and more in our weekly Turkmenistan briefing. 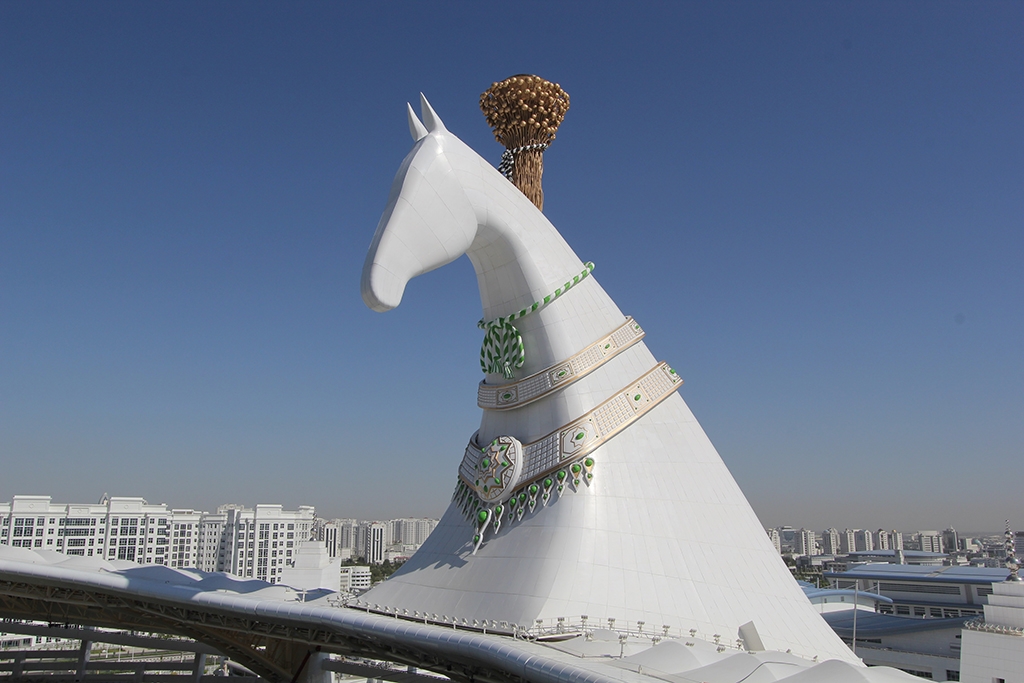 Turkmenistan's rubber-stamp legislature, known as the Mejlis, late last month approved next year’s budget, although little useful detail has been published. President Gurbanguly Berdymukhamedov has called for the spending plans to ensure what the government insists are “high levels of growth.”

The wider population, meanwhile, will be hoping that basic utilities can be kept going. RFE/RL's Turkmen service, Radio Azatlyk, reported last week on troubles with the heating system in various parts of the country. Failures at schools in the Lebap province prompted snap inspections. High-rise homes in the Mary province have been afflicted by ageing heating infrastructure, which has forced residents to fall back on electric heaters and gas ovens to ward off the cold.

Part of the response has been telling. Agents with the National Security Ministry, the successor agency to the KGB, have in some instances been warning people not to speak out about the problem.

Despite all this, authorities in Ashgabat have continued to push their long-standing policy of forcing people to dismantle air conditioning units installed on the outside of their apartments, according to a report published on December 2 in Vienna-based Chronicles of Turkmenistan.

It feels doubtful that spending will be targeted at urgently needed works of infrastructure renovation. The emphasis in past years has been on eye-catching white elephants. In 2017, Ashgabat saw the opening of a very underused $2.3 billion airport. Last year, it was the turn of the $1.5 billion Turkmenbashi Sea Port. Berdymukhamedov’s attention has latterly turned to a project that may outdo even those initiatives – the construction of a new city in the Ahal province, which surrounds the capital. The president appointed his son and presumed anointed successor, Serdar, as governor of the province in June, in apparent confirmation of that project’s high-priority status.

On November 26, Serdar Berdymukhamedov led a working meeting with central and local government officials, representatives of the business community and major construction companies to lay out plans for the new town. That the governor was given wide latitude to unveil plans on behalf of his controlling father seems indicative of his mounting stature.

No cash figures have been attached to the new town, although the scale of the vision outlined by the governor hints at something very costly indeed. This may prove hard to square with the government’s previous declaration that 75 percent of the 2020 budget would be earmarked for social spending.

The budget is anyhow a confusing conundrum. Gochmyrat Myradov, the deputy prime minister with the economics and finance portfolio, in the middle of November updated his colleagues on the execution to date of this year’s budget, which was set at the end of 2018 at 84 billion manat – this covering the overall value of incomings and outgoings. (The manat is worth around 3.5 to the dollar at the artificially set official rate). Reporting on the progress for the period from January to October, Myradov said that 15.7 billion manat had been generated in revenues and that 15.6 billion manat had been spent. Economists quizzed by Azatlyk were perplexed by what seemed to be a major discrepancy. The ultimate explanation, the experts ventured, might not be totally sinister, since it is possible Myradov was providing an update on just part of the overall budget, although the incomplete and confused accounts of state media make it hard to be certain of anything.

Then again, there is evidence that cost-cutting is happening. Azatlyk claimed on November 28 that a number of departments in the Agriculture Ministry had seen their staff numbers cut by 80 percent. The Chronicles of Turkmenistan reported that cotton farmers were receiving only a little more than half of the prices promised to them for their product. Funding shortfalls reportedly stopped construction on a new mosque in the western city of Balkanabat last year and, according to Azatlyk, local officials are having part of their salary withheld and will be fired if they do not consent to have the sequestered amounts redirected toward the project. Local businesspeople have been forced to provide building supplies free of charge, lest they incur the wrath of local prosecutors.

Berdymukhamedov has become messianic about the prospects of computer technology. His government on November 27 adopted a draft program to transition Turkmenistan’s research and development sector, such as it is, to a fully digitized system. As always with these lofty pronouncements, specifics are few. A state news agency report hazily describes the goals of the project as “increasing the efficiency of scientific, technical and innovative activities through the use of digital technologies,” and, in keeping with Berdymukhamedov’s purported free market vision, boosting “the profitability of research and development.” This last point may well be code for further education being weaned off state support as it is made to sing for its supper. The government announced at the start of 2019 that research and training institutions would need to become self-supporting in three years and that they would “more actively interact with business and investors.”

One day after the draft program was announced, TDH state news agency reported that Ashgabat had reached an agreement with Azerbaijan to build a fiber optic cable across the Caspian Sea. Turkmenistan is currently linked to the outside world by five fiber-optic cables, one coming from Iran, two from Afghanistan, one from Uzbekistan and another from Kazakhstan.

Warming to its digital theme, Ashgabat has launched a new online public services portal that the government says will enable citizens to access a whole range of basic bureaucratic services, such as paying taxes and applying for passports.

A gambler would be well advised to bet against implementation going smoothly. These high-tech solutions invariably run into trouble. Azatlyk reported on December 1 that residents of Lebap province who applied for new biometric passports have been told they will have to wait until at least July to receive their documents.

Also, the lack of competition in the provision of internet services makes prices high and quality low. State-owned Turkmentelekom has as of this month lowered its rate for unlimited internet from 250 manat to 200 manat per month. At the official exchange rate, that translates to an unaffordable $60 or so.

And, as ever, the state is keeping a close eye on everybody. It has been alleged in the past that German cybersecurity company Rohde & Schwarz is under contract to aid the government in snooping on users and blocking websites. The company denies this claim, but is unfazed by its association with one of the world’s worst authoritarian black spots and sent its representatives to attend a Turkmentelekom conference on November 27 to drum up more business.