As the president readies the public for yet another year of shortages, he has taken money from an economic stabilization fund to breed more horses. This and more in our weekly briefing. 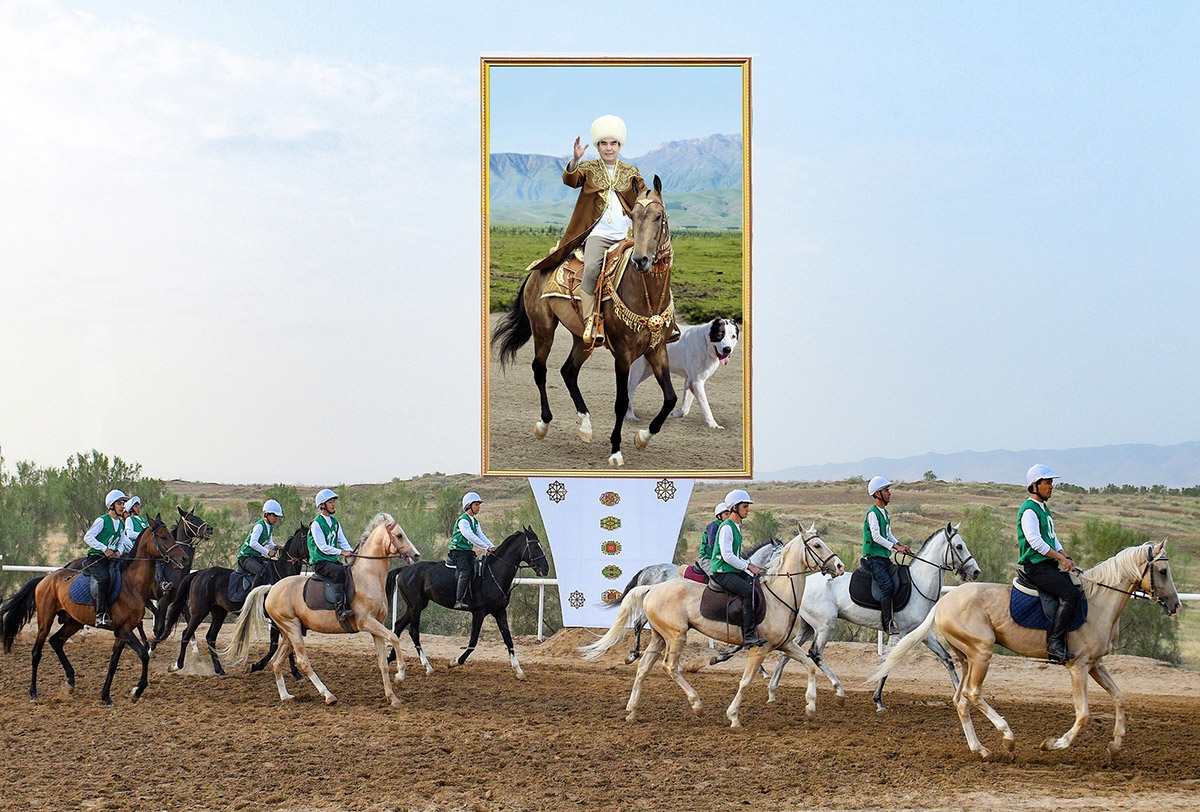 Stealing from the poor to give to his horses (government handout)

Turkmenistan is going full throttle in its efforts to return momentum to the trans-Afghan TAPI natural gas pipeline project.

Foreign Minister Rashid Meredov, who has been engaged in frantic, non-stop outreach with the countries involved since last month, spoke by telephone on January 24 with his Pakistani opposite party, Shah Mahmood Qureshi, to discuss plans on what is increasingly being billed as an imminent restart to construction on the 1,814-kilometer route. On the same day, Meredov got on the phone with his Indian counterpart, Subrahmanyam Jaishankar, ostensibly to cover the same ground.

No useful details from the exchanges with the Indian and Pakistan foreign ministers were divulged. This is unfortunate, since the issue of money is becoming more pressing. The fluidity of the situation has scared away international financial institutions for the time being. But Ashgabat has very much against character committed to loan Afghanistan at least some of the money it will need to continue work on the project. But what of India and Pakistan? Not clear.

Expounding on another strand of the energy export market diversification drive, Turkmenistan’s President Gurbanguly Berdymukhamedov noted on January 20 that he would like to see more buyers for the country’s electricity. At present, Turkmenistan’s existing electricity customers include Afghanistan, Iran, Kyrgyzstan, and Uzbekistan.

“There is great potential for electricity to be delivered to third countries via Uzbekistan and Iran,” he was quoted as saying in the Neutral Turkmenistan daily.

He didn’t name any countries, but looking to the east, it is probable he had Tajikistan in mind. Tajikistan in the distant past imported power from Turkmenistan, but Uzbekistan proved an unreliable transit nation. While Tajikistan is rich in hydropower potential, it suffers from shortages in the winter. As for Iran being a transit nation, it is anybody’s guess where power would be sent to through that country.

The oft-postponed Azerbaijan-Turkey-Turkmenistan heads of state summit may finally happen this year, according to Ankara’s envoy to Ashgabat, Togan Oral. This meeting has been cancelled numerous times since 2015, when the idea was first proposed. The last agreed date was in August 2021, when the three men were to meet at Turkmenistan’s Awaza resort, only for Turkish President Recep Tayyip Erdogan to cancel at the last moment, citing the forest fires emergency that was overwhelming his country at the time.

The summit will happen, that is, if COVID-19 allows, as Oral readily admitted. Turkmenistan has of course persistently lied through its teeth about not having detected any cases of the novel coronavirus, but the reality is that many have succumbed to the pandemic.

RFE/RL’s Turkmen service, Radio Azatlyk, reported earlier this month that sweeping, lockdown-style measures were in the course of being reimposed – a near-certain indication that a fresh surge of cases has been recorded. Keeping the population in total darkness about the virus outbreak fails even basic norms of information-dissemination at such times of potential crisis.

And yet, the World Health Organization has been happily cheering or mutely acquiescing to Turkmenistan’s epidemiological delinquency all the way. Neutral Turkmenistan on January 19 printed New Year’s greetings to Berdymukhamedov from WHO Director-General Tedros Adhanom Ghebreyesus in which the latter thanked the president for Turkmenistan’s “strong and continuing support for the World Health Organization and its mission of securing global security, helping the vulnerable, and promoting the health and wellbeing of all people.”

TASS news agency on January 19 reported on how Turkmen officials are poised to travel to the southern Russian region of Astrakhan for talks on the creation of a special economic zone port facility. This is the continuation of a development that began in December, during the visit to Ashgabat of Astrakhan governor Igor Babushkin. The governor proposed building a logistics center in the port of Olya in which Turkmen goods could be stored ahead of being further transported to Europe.

There was other good export news this week as Rosselkhoznadzor, Moscow’s agriculture watchdog, lifted its ban on the products of three more tomato producers in Turkmenistan. Last month, around the time of Babushkin’s visit, in fact, the same body announced it was giving the green light to the resumption of imports of tomatoes from fully 88 Turkmen growers. Russian regulators had in March warned of concerns that Turkmen tomato imports were found to be infected with the brown rugose fruit virus. Rosselkhoznadzor halted the import of tomatoes and even bell peppers from several Turkmen regions shortly thereafter.

Berdymukhamedov is grumpy about other areas of farming. On January 24, he took turns tearing strips off the governors of all five of the country’s provinces for their performance in ensuring the timely and effective sowing of crops. The complaints were essentially identical, varying only in small details. The governor of Ahal province, Yazmuhammet Gurbanov, is being too slow preparing the land for the sowing of cotton, potatoes and onions. Balkan governor Tangryguly Atahallyev, well, he is too slow on irrigation work, getting land ready for cotton and potatoes, and making sure tractors have all been repaired. Dashoguz governor Nazarmyrat Nazarmyradov is failing to properly clean the collector-drainage canal network. And he is mismanaging the sowing of crops to boot. Lebap governor Shohrat Amangeldiyev has offended with his collector-drainage canal maintenance performance too. The head of the Mary province, Dovranberdi Annaberdiyev, is allowing slow work in the wheat fields and is making a hash of spreading mineral fertilizers on the crops.

This hyper-detailed rundown of the disordered state of farming in every corner of the country may be designed to ready the public for yet another year of shortages. The authorities keep insisting on an import-substitution economic model, while signally proving unable to produce enough to keep the population adequately sated. They must instead content themselves with the president periodically ranting at underlings.

Berdymukhamedov may have priorities elsewhere, though. And the gags here really do write themselves. Last week, he ordered that money be allocated from the state fund designed to keep the economy stable – the so-called Stability Fund – for the purpose of breeding Akhal-Teke horses.

According to a presidential decree published in Neutral Turkmenistan on January 19, this initiative will help increase the “world glory of the ‘heavenly horses’ – the national pride and heritage of the Turkmen people.” Money will be used to modernize horse-breeding complexes, further improve living conditions for the animals and even “improve the social and living conditions of horse breeders.” It was not stated how much money will be spent on this exercise, although it will presumably make the economy more stably.

A date has been set for the potentially all-important – or possibly anti-climactic – extraordinary session of the Khalk Maslahaty (People’s Council) invoked by Berdymukhamedov last month. There have been rumors that the senatorial upper chamber of the legislature, which is to meet on February 11, might be convening to finally make a choreographed move on the succession question. If that is the case, Serdar, the president’s son and the deputy prime minister, may be on the cusp of the ultimate job promotion. Or not.