Turkmenistan: A United Nations of weaponry

After rewarding himself with a more pliant constitution, the president held a massive military parade. This and more in our weekly Turkmenistan briefing. 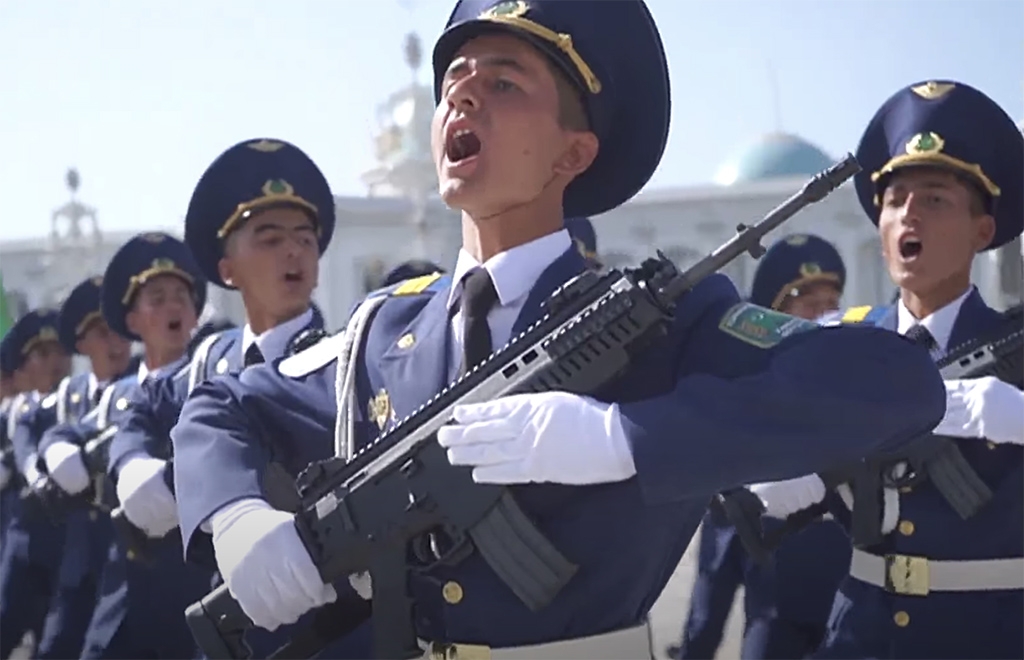 The marchers included cadets from the Defense Ministry’s Berdymukhamed Annayev school, so named after the president’s late grandfather. (all images by state media)

Independence Day celebrations in Turkmenistan are a stand-in for a State of the Nation address.

Through speeches and visual displays, the authorities set out their agenda, articulate dominant themes and brag of their achievements.

In keeping with that format, President Gurbanguly Berdymukhamedov dwelled in particular, during the September 27 proceedings, on last week’s amendments to the constitution. The full implications of that tinkering, whose most significant adjustment was to usher in a two-chamber parliament, is yet to be fully understood, beyond its implications for a potential succession strategy.

But for the president, the meaning is clear. The reforms will strengthen democracy and “increase the efficiency of governments bodies.”

The speechifying was all done by 10 a.m., which meant that the colorful business of parading could begin. The martial component was lengthy and extensive, presumably an attempt to remind the public of the regime’s commitment to order and stability.

To begin with, Defense Minister Begench Gundogdyev stood in an open-top Rolls-Royce Phantom Limousine and inspected rows of troops.

In the parade that followed, troops representing all branches of the services paraded past the rostrum in near lockstep. The marchers included cadets from the Defense Ministry’s Berdymukhamed Annayev school, so named after the president’s late grandfather. For some folkloric flavor, fuzzy telpek hat-wearing troops with the equestrian unit cantered through carrying bows and shields. 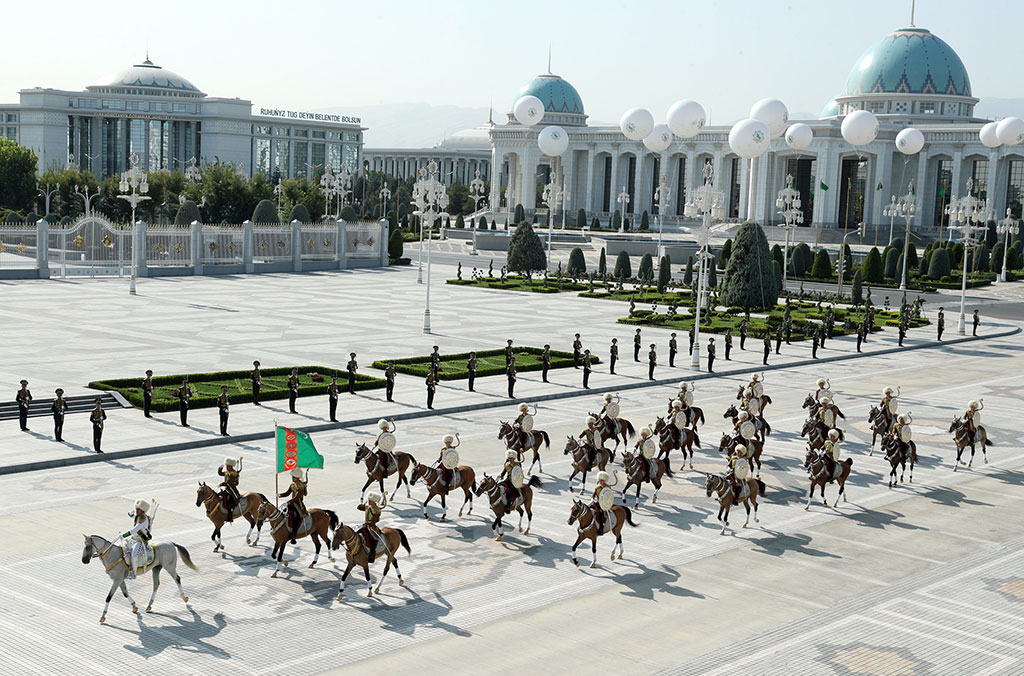 Then followed the suspiciously clean and unused-looking military machinery. Off-road vehicles made by U.S. company Polaris Industries and in the service of the Turkmen Edermen special forces unit were first out of the traps. 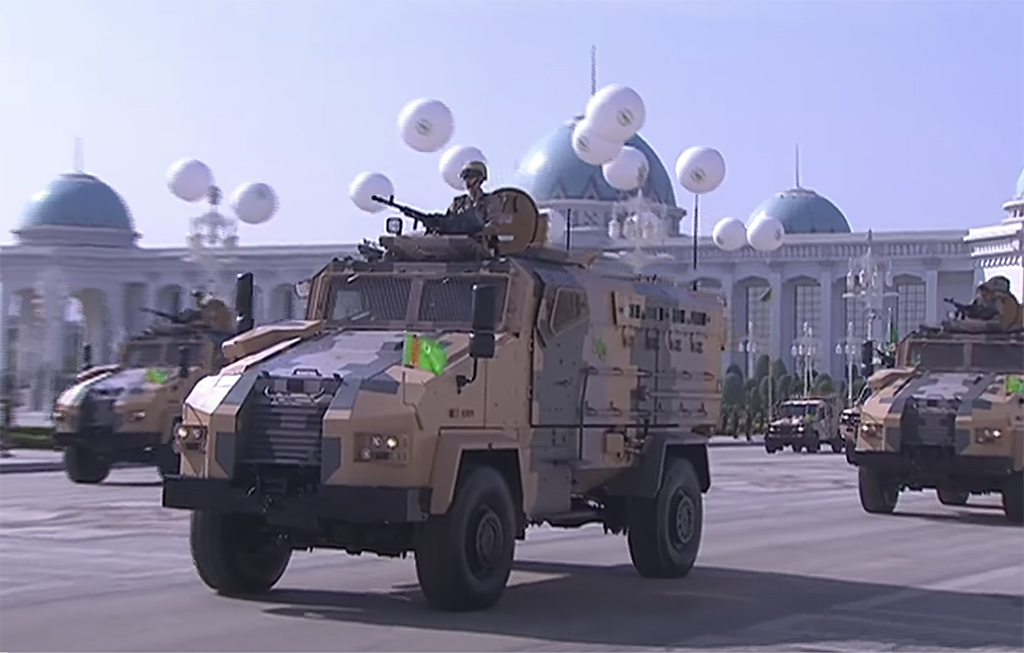 One section of the mechanized column comprised vehicles belonging to the Interior Ministry, distinguished by their blue camouflage livery. The point of these bulky motorized monsters, the state news agency explained, is to “maintain public order.”

The skies are still quite a Russia-heavy affair, though. Hence the Kazan Helicopters-made Mi-17s and Mi-24s and the Sukhoi Su-25 fighter jets. But there is room for Austrian-made DA42 surveillance aircraft, Interior Ministry-owned Eurocopter EC145 helicopters developed jointly by Airbus and Kawasaki Heavy Industries, and security services-owned Eurocopter-365s produced by Airbus, and state border service-owned and Italian-produced Agusta A109 helicopters.

Relief for those uninterested in big guns and machines came in the form of a float parade that showcased the various spheres of public enterprise. So the Health Ministry float, for example, featured two flag-wavers in medical garb in front of carboard cutouts of hospital equipment, a portrait of the president and the covers of Berdymukhamedov’s 11-volume work on medicinal plants. Another elaborate float was a tribute to the country’s aviation and telecommunications sectors and featured a large model Turkmenistan Airlines plane, a life-size satellite dish, and the logo of the now-defunct Internet Explorer web browser.

The government has ostensibly shown its appreciation for health workers in other ways too. TDH news agency reported on September 25 that medical staff involved in preventing the entry of infectious diseases into the country are to receive a 15 percent hike in their monthly salaries. Health workers in remote locations are, under the same decree, to get a 20 percent pay hike.

A report from earlier this month by RFE/RL’s Turkmen service, Radio Azatlyk, offers a less glossy possible slant on this development. Azatlyk has reported extensively on the almost-certain fiction of Turkmenistan’s self-adopted coronavirus-free status. In a September 14 article, Azatlyk cited sources as saying that the sheer number of frontline healthcare workers being infected has pushed many to quit. And for all the pledges of increased salaries, staff at one quarantine clinic in the Lebap province are not being paid at all, the broadcaster reported.

This notwithstanding, Berdymukhamedov had the brass neck to pontificate in his United Nations General Assembly address on September 23 on the optimal ways to prevent the spread of COVID-19. He asserted at one stage that the virus did not recognize “borders, races and nationalities,” although if his own government is to be believed – it isn’t, obviously – the coronavirus has proven remarkably respectful of Turkmen frontiers.

There has been a steady trickle of evacuation flights for Turkmen nationals stranded abroad. Arzuw News reported that one had been scheduled from Belarus to Turkmenabat airport on September 28. What little inbound air traffic there is in Turkmenistan these days is diverted to Turkmenabat. Arriving travelers are held for two-week quarantine sessions at a camp in the desert outside the city, even though only people bearing certificates attesting to their coronavirus-free status are allowed on flights in the first place.

Amsterdam-based Turkmen.news reported that another evacuation flight is planned out of Munich on October 11.

Others wanting to get back home have taken their own desperate measures. On September 25, Turkmen.news reported on 35 women stuck in Kazakhstan somehow managing to get through the Garabogaz crossing, which is at the very western end of the country. The website is at a loss to explain how this could have happened, given how tricky this crossing is even at the best of times. But this isolated success is apparently raising slim hopes among Turkmens in Kazakhstan that Garabogaz could become an entry point for people wanting to return home.

Turkmenistan’s particularly robust border closures have raised the specter of food supply troubles, something the president has taken apparent measures to avoid. It does not seem plausible that problems can be avoided altogether, though. Vienna-based Chronicles of Turkmenistan reported on September 24 on how long lines have been forming at meat counters in state stores, where prices are subsidized, since a reported shortage in mid-August.

Human Rights Watch and the Turkmenistan Initiative for Human Rights delved deeper into this issue in a detailed September 23 report in which they spoke of how “government inaction in response to the economic fallout of the Covid-19 pandemic has drastically exacerbated Turkmenistan’s pre-existing food crisis.”

The report documents the scale of the problem with several useful testimonies and data points. HRW says it was told by a student in November that his family was spending up to four-fifths of its income on food. Almost all the money pensioners receive goes on food. One father of eight told TIHR in July that his family has been forced to cut back on how much they eat. “That’s because we have less money, and [food] prices have gone up. We’ve had problems getting food due to the lines and the shortages,” the man is quoted as saying.