Could the frantic reorganization mean the sense of crisis is finally getting to the president? 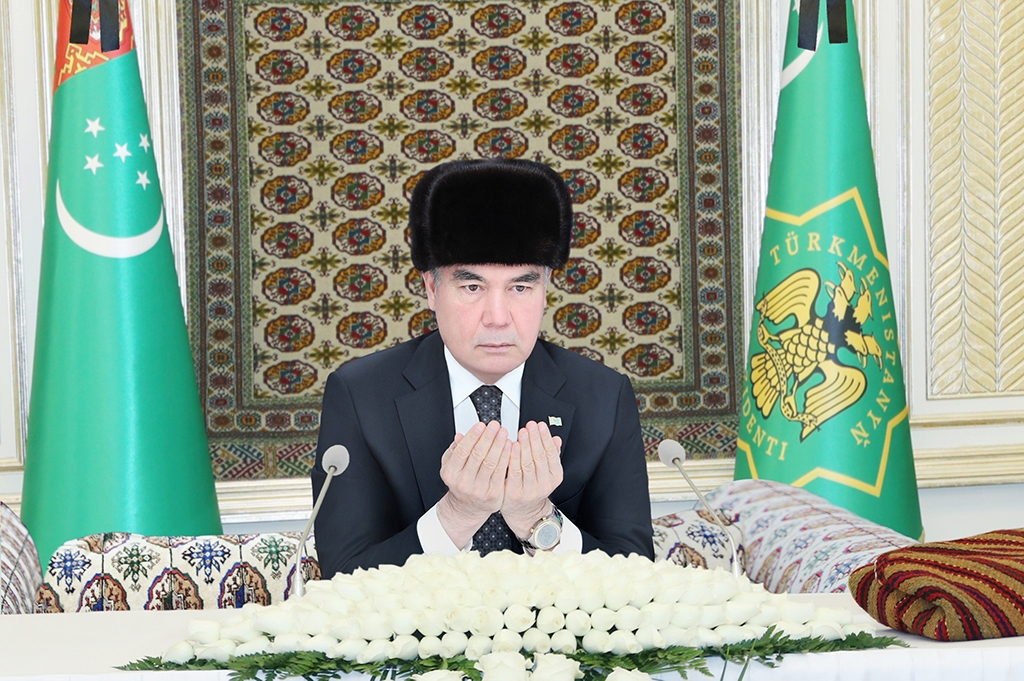 These are turbulent times for Turkmenistan’s ruling elite.

The scene was shown in an extended edition of the Watan Habarlary evening news bulletin on October 1. Mulikov stood penitent, eyes fixed to the ground, not even taking notes, like all his colleagues, as Berdymukhamedov lambasted him. Upon concluding his tirade, the president jabbed a forefinger toward the door, signaling Mulikov’s cue to leave the room.

Berdymukhamedov hires and fires with abandon, but Mulikov was a survivor. He had run the nation’s notoriously corrupt police force since 2009. Over that time, he was serially issued with warnings for poor performance, and yet he still managed to hold onto his job. Official chronicles reveal only that Mulikov was dismissed and demoted, but other circumstances hint at the possibility that he has turned in his police uniform for prison garb.

What, then, accounts for his downfall?

Amsterdam-based website Turkmen.news had foreseen this turn of events in September. The suspicion is that he was brought down by his links to businessman Charymukhammed Kulov, who was last month subjected to a televised struggle session in which he confessed sobbingly to major corruption. Amandurdy Ishanov, a former Trade and Foreign Economic Relations Minister, got the same treatment, as have many other local businessmen and lower-ranking police officials over the past few weeks.

The implication of all this is that Mulikov abused his office to enrich his cronies and had thereby drawn the president’s ire. This feels like only a partial explanation, however. Corruption goes with the job and Berdymukhamedov has to all practical intents and purposes evinced indifference to the all-consuming graft and nepotism crippling his nation’s prospects.

This looks instead like a campaign to consolidate power – a consideration that surfaced as an acute concern over the summer, when Berdymukhamedov disappeared for several weeks, only to finally reappear noticeably greyer and weakened.

There are other clues that the ruling elite is thinking about the distribution of authority. During a Cabinet meeting on October 4, Berdymukhamedov announced he was heading up a commission to draft a new Constitution.

As RFE/RL’s Turkmen service points out, the last time the Constitution was tinkered with was in September 2016, when the restriction on people above the age of 70 running for president was scrapped. (Berdymukhamedov turned 62 in June).

The stated aim of the looming changes is to hand more powers to legislators.

This idea was trailed in a September 25 speech in which Berdymukhamedov talked about the need to turn parliament into a bicameral chamber. The apparent plan is to convert the Khalk Maslahaty, or People’s Council, a recently reconstituted annual mass gathering of top officials and town elders that serves to rubber stamp major policy decisions, into something akin to a Senate.

It is tricky to fathom the precise thinking here. Bicameral or otherwise, the parliament will remain an institution of non-existent decision-making relevance so long as Berdymukhamedov maintains his autocratic grip over government.

Things may be a little more fluid in the provinces.

In another potentially significant piece of personnel management, Berdymukhamedov this week reshuffled his regional plenipotentiaries. This is the third time he has done so in 18 months – earlier reshuffles took place in February and last April.

A spate of lower-level officials was also moved around this week. Mergennepes Annapepesov was fired as head of Türkmen Atlary, the state horse training academy. The head of Türkmenaragatnaşyk, the state communications agency, Bayramgeldi Ovezov was replaced, although in his case it was for promotion to a new job as the deputy prime minister with the portfolio for transportation, communications and industry. Ovezov takes over from Charymyrat Purchekov.

The frantic reorganization might mean the sense of crisis is finally getting to Berdymukhamedov. At the Cabinet meeting, he noted that work to address unemployment was not being implemented properly. He also expressed his dissatisfaction with the pace of agricultural reform. Days earlier, he had complained about the state of public housing, vowing to increase funds to resolve problem areas.

None of this means that Berdymukhamedov has any intention of refraining from his pursuit of white elephants.

The president toured the site of some new constructions in the capital, Ashgabat, on October 2. These included what the state news agency referred to as an International Health and Aesthetic Center, which will be housed in a building with a 30-meter-high façade in the shape of giant mirror. As Vienna-based Chronicles of Turkmenistan pointed out, this appears to be a plastic surgery clinic.

Berdymukhamedov also inspected plans for a hotel to be named Arkadag – the honorific by which he is most widely known. This leisure spot will be graced by an artificial 725-meter-long river, fountains and a water park.

The reformed Khalk Maslahaty is also to get a permanent home, one devised by the authoritarian leader’s architectural design company of choice, Bouygues. The Paris-based company has made countless billions catering to the megalomaniacal tastes of the two strongmen that have ruled Turkmenistan since independence.

There was a little dwelling on the past on October 6, when Berdymukhamedov attended a wreath-laying ceremony at the memorial complex devoted to his predecessor, Saparmurat Niyazov, who died suddenly in December 2006. The president spoke at the ceremony about the importance of not forgetting the achievements attained by the late leader in “protecting the nation’s sovereignty.” This is curious because state media has, by and large, completely forgotten Niyazov, not to speak of his peculiar two-volume cultural-spiritual reference book, the Rukhnama.

Is it possible that thoughts are turning to legacy?

The only prospective successor on the scene is Berdymukhamedov’s dour son, Serdar, who was in January appointed governor of Ahal, the region that surrounds Ashgabat and is home to the country’s elite. This strictly regional post, however, does not stop Serdar Berdymukhamedov from leading government delegations on overseas trips.

On September 30, he traveled to London for meetings with British government officials. Much of the visit appears to have been concentrated on tapping British agricultural expertise for insight on how to improve productivity in Turkmenistan. Berdymukhamedov Jr’s tour took in a trip to the College of Agriculture, Food and Rural Enterprise, in Antrim, Northern Ireland, and even a glance at a fish farm deep inside the Irish countryside.