Turkmenistan: After us, the flood will come

The currency is not the only thing underwater in Turkmenistan. 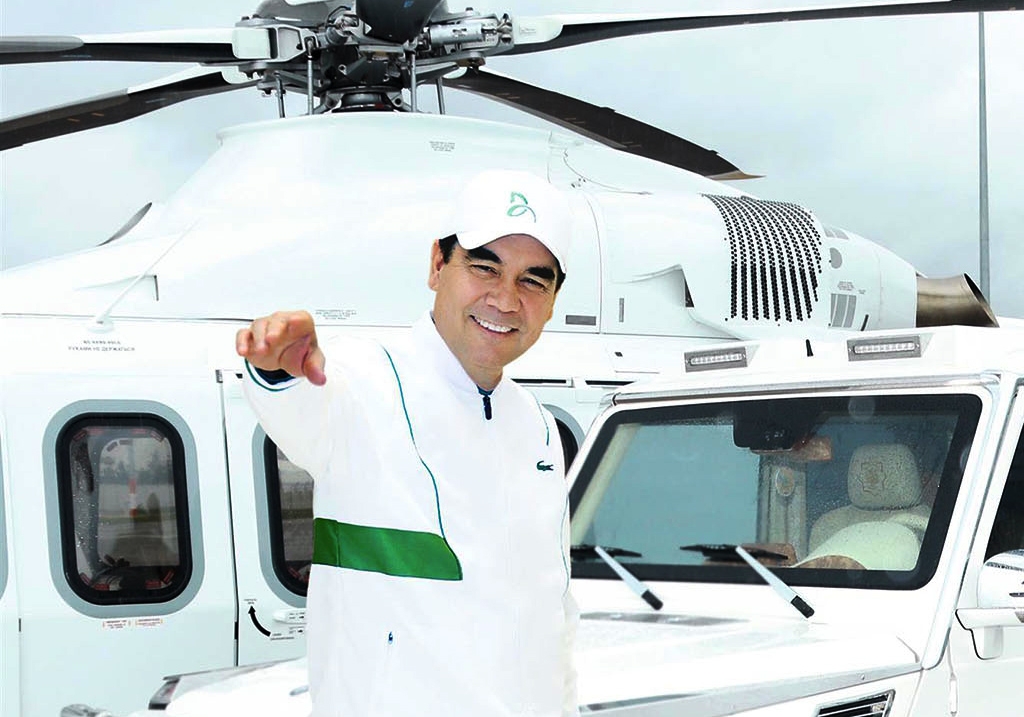 Advancing his apparent quest to be photographed at the helm of every form of transportation imaginable, Turkmen President Gurbanguly Berdymukhamedov last week took to the skies in a helicopter for a bird’s-eye tour of the capital he has recast in his image.

State media explained that the flight was an opportunity for the president to review ongoing construction projects in Ashgabat. But what was omitted by state media and was instead caught by social media and RFE/RL’s Turkmen service, Azathabar, was that much of the city was underwater at the time.

Swathes of the metropolis had been submerged by almost a week's worth of constant rain. Ashgabat as conceived by this president and his equally eccentric predecessor, Saparmurat Niyazov, is a city of mega-boulevards lined with blindingly white apartment buildings and a generous peppering of quirky ministerial buildings and palaces. The prioritization of spectacle over thoughtful urban practicalities, however, has led to the remarkable sight of a desert nation being blighted by deluges on the streets of its capital.

And it isn’t just in Ashgabat either. According to World Bank estimates, around $700 million, some 2 percent of gross domestic product, is lost annually due to flooding across the country.

Now although state media showed none of the flooding, at least one top official may have got his marching orders as a result. Rovshan Orazmamedov, a deputy defense minister and head of the Main Directorate for Rescue and Civil Defense, got the chop, while Defense Minister Yaylym Berdiyev was given a dressing-down for “weak control over the activities of subordinate personnel.”

In what may or may not be a related personnel appointment, state newspaper Neutral Turkmenistan announced that Orazdurdy Sukhanov was on May 18 named the new Automotive Transport Minister. Not much was offered by way of a biography other than his education – a degree from the S. A. Niyazov Turkmen Agricultural University – and a range of jobs over an 18-year span at the Interior Ministry.

Last week was also the start of Ramadan, locally referred to as the month of Oraz, although you'd barely know it if you read the local papers. State news agency TDH did note that Berdymukhamedov led a brief ceremony to mark the event, but was otherwise largely silent on the holiday month. That’s not surprising given the state’s strict control over religious practice.

Berdymukhamedov prefers his own holidays. Turkmen Horse Day was elevated to a national holiday last month. And on May 18, state media announced Berdymukhamedov's latest festive brainchild, the Day of the Constitution and State Flag.

Even the local edition of World Bicycle Day, coming up on June 3, is getting more air than Ramadan. This is in no small part down to Berdymukhamedov’s ardor for ambulation by this quaint, two-wheeled form of conveyance. A scribe at TDH was pressed into writing a 350-word piece occasioned by the president going for a 30-kilometer bike ride from the Kopet-Dag mountains into Ashgabat.

“Being a supporter and active popularizer of a healthy lifestyle, the president is thus providing his compatriots, and the youth above all, a wonderful model to emulate,” noted the author. 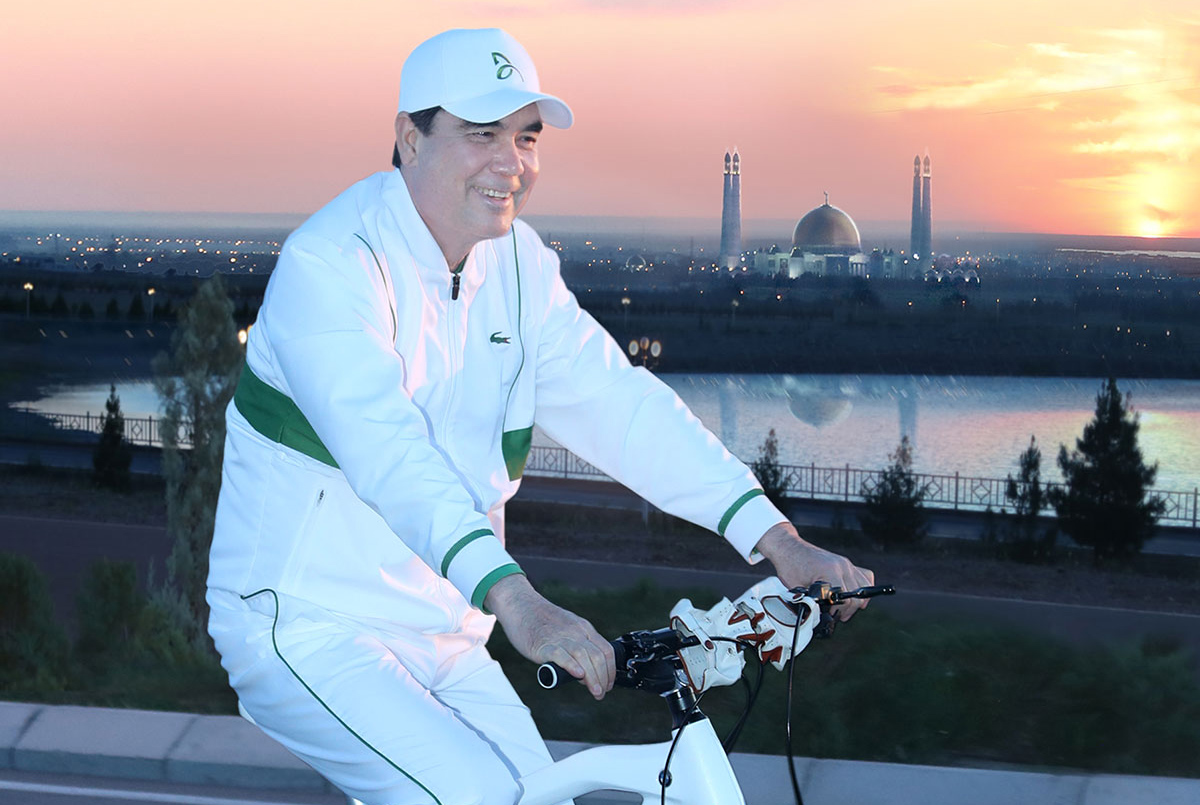 The photo of the beaming president astride a spotless bicycle provided as illustration looks suspiciously touched-up, though. Since the president never goes anywhere without several dozen bodyguards in tow, it is mystifying to understand how TDH expects its readers to believe he could go for a mirthful ride all on his own.

And in any case, it is not as though the president’s compatriots are exactly short of opportunities to lose weight. Adding to the growing body of reporting about food shortages in Turkmenistan, the exiled opposition-run Gundogar news website ran a coruscating article on May 20 alleging there is a major ongoing deficit of eggs.

As worrying as these food shortages might be, the situation seems to be even bleaker for ethnic kinfolk across the border in Afghanistan. Azathabar released a video report on May 17 from the town of Sheberghan, in Afghanistan’s Jowzjan province, on an unfolding security crisis along the Afghan-Turkmen border. According to Azathabar, residents of two ethnic Turkmen villages in neighboring Faryab province were forced to flee local clashes. Naturally, recent reports that the Islamic State group is gaining support in Afghan provinces neighboring Turkmenistan have yet to warrant a single mention in Turkmen state media.

There is one development in Afghanistan that has caught Turkmenistan’s attention, however, and it may well cause sleepless night in Ashgabat. According to a May 21 report on the Afghanistan-based Tolo News website, gunmen attacked a group of de-miners working in Kandahar province's Maiwand district to clear improvised explosive devices in preparation for laying the Turkmenistan-Afghanistan-Pakistan-India, or TAPI, pipeline. Kandahar's provincial police chief alleged the Taliban were behind the attack, which reportedly claimed five lives. The militant group had previously insisted it would not attempt to derail this project, so this assault appears set to change the calculus.

Since this affects Turkmenistan directly, the state-run company acting as head of the TAPI consortium seemingly felt obliged to issue a statement on the incident, although it managed in remarkably brazen and dishonest manner to paper over the fatalities.

“We have recorded no security issues with the 1,500 workers [on this project]. This incident is the only one of its kind since survey work began in Afghanistan,” the company said.

In more overseas woes for Turkmen citizens, Azathabar has reported that students from Turkmenistan studying in Russia are having to turn their hand to menial agricultural labor on the weekends to raise cash for their education because their Turkmen banks are withholding transfers of cash.

People who have hard cash inside Turkmenistan are exasperatedly watching as its value melts away. Exile-run Chronicles of Turkmenistan website claims the manat has now fallen to 21.5 against the dollar, nearly seven times the official rate. There have been rumors floating about that Ashgabat might be trying to negotiate some relief from the International Monetary Fund, possibly in return for currency reforms. In a response to a Eurasianet query, however, the IMF said it “has not received any loan request from the Turkmen authorities and has not discussed this topic with them.”

Foreign lenders might, after all, make all kinds of unreasonable requests, like putting an end to trophy projects.

Down in Russia’s southern Astrakhan region, a new Ashgabat-funded school has just been built and opened to accommodate 190 children from the local ethnic Turkmen community in the Privolzhsky district village of Funtovo. Going by images in Astrakhan media, the school, which has reportedly been built over an area of 3,500 square meters, has been clad in the resplendent, kitchen tile-white beloved of Berdymukhamedov and looks like another vanity-led undertaking the government can ill afford.