Turkmenistan: All men must make their way come Independence Day

When the point-man on foreign economic relations is getting flung into jail, it is a good clue that not all is well. 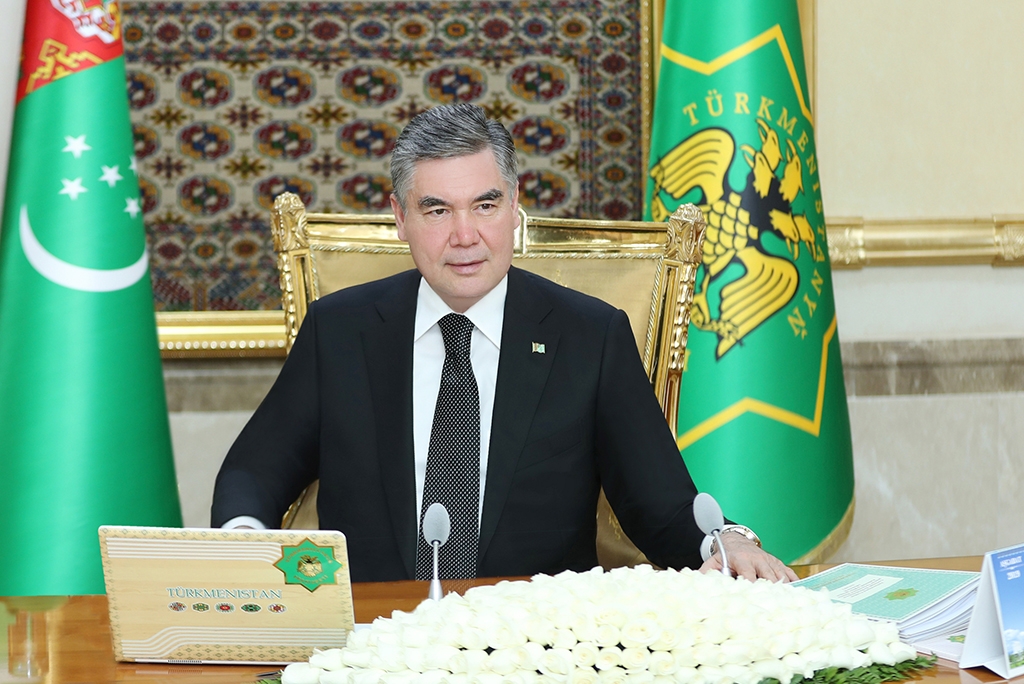 The president with his computer – or is it a domestically produced computer-shaped toy? (government handout)

It is only bad news that usually gets out of Turkmenistan’s prisons.

So it was a rare happy day on September 6. Labor activist Gaspar Matalaev was released from prison after serving almost three years on charges of bribery and fraud. His supporters say the accusations were trumped up – punishment for documenting cases of forced labor during cotton harvests.

Prisons in Turkmenistan are widely reputed to be hellholes, not that outsiders are usually let anywhere near them. Political convicts have it the worst. They reportedly suffer routine abuse and are cut off entirely from their relatives.

The Diplomat, a Washington-based current affairs website focusing on Asia, carried an article last week document the death in Turkmen prisons of two graduates of schools linked to U.S.-based Turkish cleric Fethullah Gülen. Turkmen.news reported on September 8 that another alleged Gülen supporter, 39-year-old Alisher Mukametgulyev, who is being held in the notorious Ovadan-Depe jail, is in desperate need of medical assistance.

Turkmenistan was likely emboldened to intensify its pressure on Gülen-linked people by the intense crackdown on the cleric’s followers that happened in Turkey following the attempted coup there in 2016. Not that Ashgabat ever needs much of an excuse to repress.

Religious Freedom Watchdog Forum 18 this week revealed that 20-year-old Jehovah's Witness adherent Azat Azarov was jailed for refusing compulsory military service. This was the fourth jailing of a conscientious objector this year, according to Forum 18.

It is not just activists and followers of esoteric faith groups that end up in trouble. Out-of-favor officials get the same treatment. Azerbaijan news website Media.az reported on September 4 that a 48-year-old former official called Akhmed Khaidov was arrested upon arrival in Baku’s Heydar Aliyev International Airport in Baku. The website said, without clearly identifying the source of its information, that Khaidov is wanted back in Turkmenistan on suspicion of committing embezzlement and abuse of office.

Two sources told Turkmen.news that Amandurdy Ishanov, who was this month fired from his job as Trade and Foreign Economic Relations Minister, was taken into custody on September 4. Taking care to note that its reported claims have yet to be verified, Turkmen.news relayed the allegation that a businessman testified to say Ishanov had extorted a bribe in his previous role as chairman of the State Commodity and Raw Materials Exchange.

When the point-man on foreign economic relations is getting flung into jail, it is a good clue that not all is well. State media has to clutch at straws in boasting on international joint ventures. One such example was last year’s creation of something called Agzibirlik Tilsimaty, a joint effort between an IT development unit of the Trade and Foreign Economic Relations Ministry and a couple of no-name Chinese companies. This outfit is purportedly at the cutting edge of Turkmenistan’s digitization agenda, although the manufacturing space filmed by loyal news outlet Orient suggested the workstations employ not much more than 20 or so technicians. An engineer at Agzibirlik Tilsimaty noted in the Orient report, which was posted online on September 8, that it was their company that produced 80,000 educational computers for Turkmen schools. That sounds very much like the devices that Vienna-based Chronicles of Turkmenistan learned were little more than computer-shaped toys.

Maybe not such a great loss since President Gurbanguly Berdymukhamedov is, after all, very much one for outsized toys. State television produced a remarkable package for the evening news bulletin on September 5. It showed Berdymukhamedov in battle fatigues observing, often while on a bicycle, a colorful array of military exercises of dubious practical utility.

Soldiers arrayed in a pattern on a barren hillside performed martial arts moves; Alabai and Alsatian dogs were led up and down steps; men spun helplessly in Catherine Wheel-type devices; motorcyclists rode two to a vehicle, one steering while the other fired an automatic rifle; paramedics careered down ziplines with their stretchered companions; gun-toting horsemen shot down target cutouts; goodies and baddies faced off in an epic mock battle for control over a chemical plant. On and on it went.

The whole affair appeared to have been done for the entertainment of Berdymukhamedov, who capped off his day rally-driving in the desert and collecting grass. Such spectacles give little to no sense of the real capabilities of the Turkmen armed forces.

Berdymukhamedov’s son, Serdar, has also been in state news. On September 2, he cut the ribbon at a new school in Geoktepe, a village in Ahal province, which he rules over as governor.

Geoktepe is where the Berdymukhamedov family trace their roots and is assuming special symbolic importance for this clannish regime. The district is to become the site of a new city planned by Berdymukhamedov. This new settlement will arise from nothing to accommodate 70,000 residents by 2020, if all goes to plan.

Later, on September 7, Serdar Berdymukhamedov presided over festivities to mark the start of construction of a perversely outsized new administration building for the Ahal province. 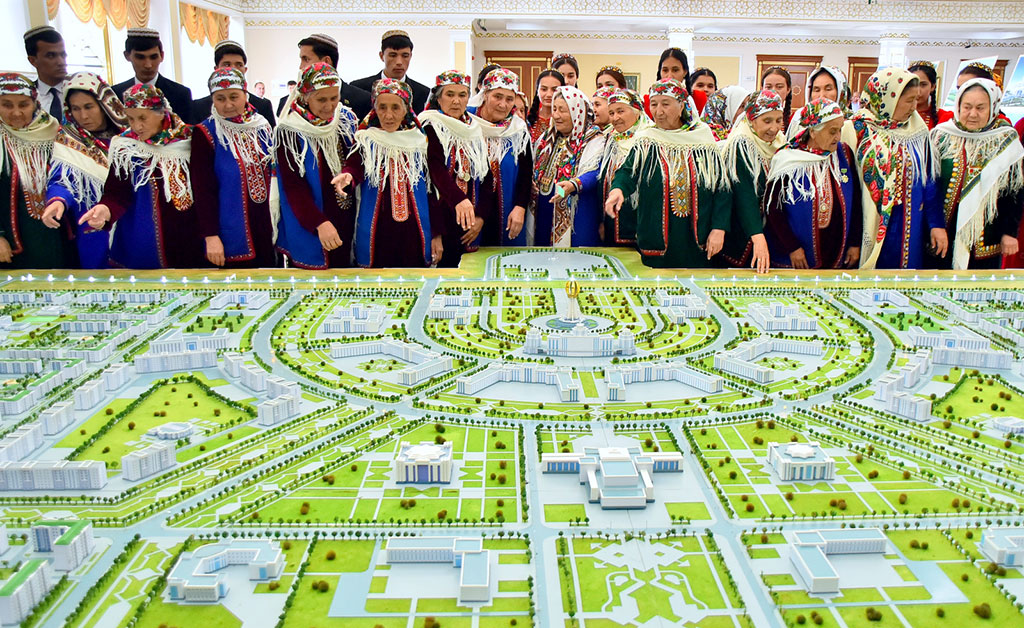 Looking forward, preparations are underway for the next major national event – Independence Day. This will be the second time that Turkmenistan marks this event on September 27. Last year, Berdymukhamedov shifted the date forward by one month for reasons unknown.

The highlight around that period will be the ad hoc convocation of the Khalk Maslahaty, or People’s Council. This mass would-be representative body, which brings together leading national officials and communal elders, was disbanded in 2008, but its reformation was ordered by presidential decree in October 2017. Its main function at the reunion session last September was to slap a semblance of legitimacy onto patently unpopular decisions. It was the Khalk Maslahaty that decided, for example, that Turkmenistan could not exist a moment longer with a whole spate of free utilities.

What bombshell awaits this year? Previews in state media offer few clues, but it appears that the “transition to market economics” – Turkmen code for “the government gives the people less but demands they give back more” – is high on the agenda.

The notion that Turkmenistan is a market economy would be amusing if the reality were not so grim. An untold number of people remain reliant on badly paid government work. As people like the recently released Matalaev have documented, it is those same civil servants who are regularly press-ganged into cotton-picking. Not to speak of the North Korea-style mass celebrations put on to please Berdymukhamedov.

RFE/RL's Turkmen service, Radio Azatlyk, reported on September 9 that school and university students in the Mary province were forced to take part in six-hour-long rehearsals in preparation for Independence Day celebrations. Civil servants and military units have reportedly already been dispatched from the provinces to Ashgabat for rehearsals as well. According to Turkmen.news, some students were forced to begin practicing for the Independence Day festivities as early as August 1.