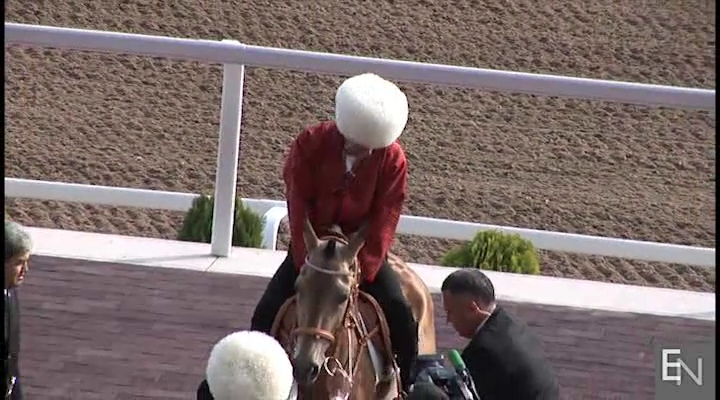 Last month, security forces in Turkmenistan tried to prevent video of President Gurbanguly Berdymukhamedov falling off his horse from reaching the outside world. Perhaps they feared the scenes would damage his cult of personality.

It’s safe to say they have: broadcast all over the world, the images make a mockery of the Turkmen brand of totalitarianism, a style embodied in a vain president who feels compelled to show the world he’s the best at everything. The riding mishap, which occurred immediately after Berdymukhamedov won a carefully scripted race on April 28, as well as the reaction to it by security forces, say a lot about what years of isolation have done to Turkmenistan.

For starters, despite his security detail’s best efforts, it was relatively easy to get cell phone video that captured the fall out of the country, and also to hide a higher-quality digital-video tape. Seen here on EurasiaNet.org for the first time, the higher-resolution footage should dispel any idea that a stunt double could have been riding Berdymukhamedov’s favorite horse, Berkarar (“Mighty”).

For me, the fall was the only unscripted moment in a four-day all-expenses-paid junket that began with flying into Ashgabat, Turkmenistan’s marble capital, on an Airbus with Berdymukhamedov’s photo watching passengers from the front of the cabin.

The annual “Horse Day” festival was aimed at promoting Turkmenistan as an international racing destination. Representatives from dozens of horse industry leaders attended, including the United Kingdom’s Duralock (fence specialists) and Germany’s Ismer stud farm, all eager to work in one of the most closed countries on the planet – one governed by a man obsessed with horses.

"Because it's a big, big horse nation," said a German entrepreneur when asked why he wanted to work in Turkmenistan, which also happens to be flush with cash from the world’s fourth-largest natural gas reserves.

Few seemed willing to discuss the Turkmen regime’s brutal rights record, even in hushed tones. Priority was given to praising the Akhal Teke horse, a local breed that Berdymukhamedov, who also goes by the honorific title Arkadag (Protector), has promoted as a national symbol.

“Are Turkmen cowboys?” I asked one of the English-speaking university students that looked after festival attendees as minders and guides. The students, who said they were volunteers, accompanied us as we were escorted, by police, between Ashgabat’s rows of white-marble high-rises and the newly built horse track. The students were careful and polite. If asked about anything deeper than horses, they would suddenly forget their English.

“Cowboys, as I know, are living on a ranch, kind of as farmers,” the student responded. “In our country, [riding horses] is more amusement, entertainment, health, it is good for health.”

That is only if you don’t fall off. At the racetrack, the crowd of approximately 7,000, according to official estimates, went dead quiet after Berdymukhamedov tumbled over his mount and lay motionless in the dirt. Officials looked nervous. The only sure thing was that, no matter if Berdymukhamedov was alive or dead, the Turkmen authorities would not want news of the fall reaching the outside world.

This is when the polite hospitality ends and the totalitarian regime shows its heavy hand, I thought. But a heavy hand is not the same as a strong, competent one.

Nearly an hour after being hastily carted off the field by his black-suited men – his neck flopping about with disregard to potential injuries – Berdymukhamedov reappeared to wave, a bit stiffly. When handlers brought his steed, Berkarar, back out onto the track, and Berdymukhamedov gave it a few forgiving pats, he appeared to be wearing some sort of back brace under his off-white-colored jacket.

Later, security men ordered all foreigners with cameras inside a stadium corridor. The doors were locked and phones and cameras were checked for imagery of the fall. If individual photos and video could not be deleted, the tape or memory card was confiscated.

By this time I was carrying cell-phone footage of the fall and a broadcast-quality tape shot by a colleague. (We have declined to be identified fearing retribution from Turkmen authorities.) After students approvingly watched me delete a few photos, I avoided a thorough search by slipping the phone into my bag and later sent EurasiaNet.org the cellphone video from my hotel.

The search seemed to work, at first. International news organizations initially relied on state media version of events, with video of the race cutting immediately after Berdymukhamedov won (with other riders offering what appears to be only a modest final push), a second before his fall.

At the airport, security guards made a second, more aggressive search. After x-raying our luggage, guards confiscated computers, cameras, cell phones and passports with no explanation. Those with passwords on their computers were called into a room to unlock them. Video and photos were scrutinized for signs of the fall.

When I was called upon to unlock my laptop, three security officials sat around a table and looked through my equipment. They didn’t seem to see my cell phone with built-in camera – the one I used to record the fall, which was in my pocket – but my iPod was of particular interest. It’s not clear if they confused it for a phone, but it took some effort to convince the guards it had no camera.

Opening my laptop, one methodical official searched through the programs until finding one that displayed the word “photo.”

Opening Apple’s iPhoto software he flicked through images of Ashgabat and Akhal Teke horses. Satisfied that there was no sign of Berdymukhamedov’s fall, he closed the laptop and handed back my passport.

What he hadn’t noticed was a file on the desktop called “Turkmenistan.”

The lack of basic competence was stunning. It seems decades of poor education in the closed country have taken its toll.