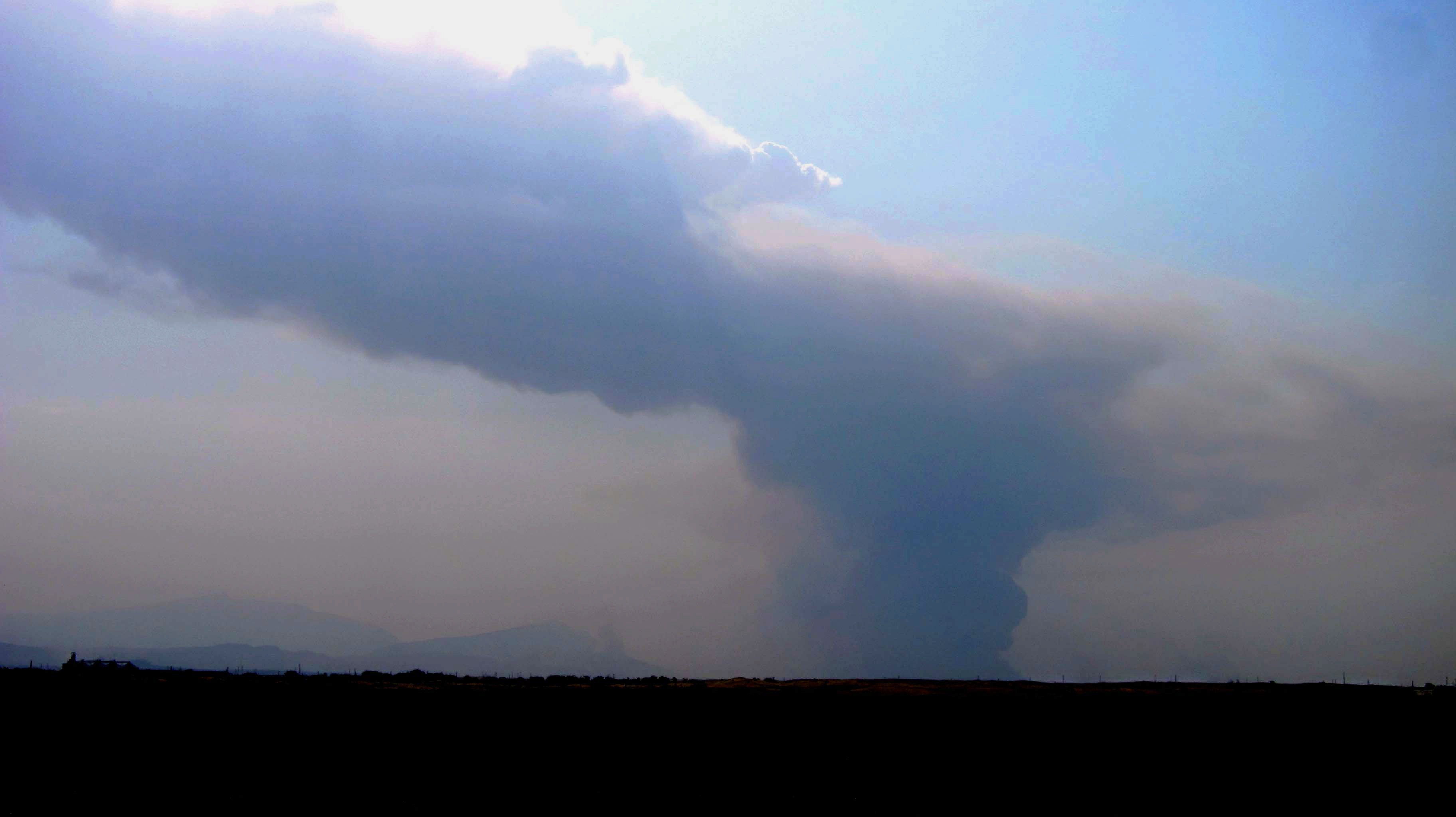 Smoke from the explosions in Bezmein, near Ashgabat, Turkmenistan could be seen on the evening of July 7. (Photo: EurasiaNet)

A series of explosions ripped through a town outside Turkmenistan’s capital Ashgabat on July 7 causing numerous casualties and widespread damage, while plunging sections of the city into darkness. The epicenter of the tragedy apparently was a military storage facility, where some sort of accident caused a large amount of ordnance to explode.

The first massive explosion occurred at about 4:40 pm in Bezmein, also known as Abadan, situated about 20 kilometers to the west of Ashgabat. Witnesses reported that the initial explosion was followed by a series of lesser blasts. Rockets could be seen sailing through the sky and exploding, artillery shells were also reportedly detonating throughout the town.

The town reportedly was evacuated. Estimates on the number of dead and wounded were not immediately available. But dozens of ambulances could be seen racing through the streets of Ashgabat in the hours immediately following the first explosion.

At 10 pm, out-of-control fires continued to burn in the town and surrounding hills. The flames were visible from Ashgabat and occasional explosions could still be heard. State-controlled mass media outlets as of the evening of July 7 had yet to carry reports on the tragedy. There was no way to determine immediately what caused the first explosion in Bezmein. Authorities took action to cut international phone communications and internet access.

Late on July 7, the official Turkmen State News agency issued a statement that indicated the government was in a state of Soviet-style denial.  The report said President Gurbanguly Berdymukhamedov convened an emergency session of the National Security Council to review “the extraordinary situation, in connection with the ignition of pyrotechnical matter, intended for fireworks, stored in special warehouses” in Bezmein/Abadan.  Authorities blamed the mishap on the extreme hot weather that the country has been experiencing recently. It also asserted that there were no casualties or “special destruction,” although it added that the population were receiving first aid.

The military storage facility at Bezmein dates back to the Soviet era. After Turkmenistan gained independence in 1991, Turkmen authorities consolidated arms depots and much of the ordnance stored in Ashgabat and elsewhere around the country was reportedly transferred to Bezmein.

The town also houses an important power station, where Turkmenistan’s deceased former dictator, Saparmurat Nizyazov, once worked. The explosions evidently damaged the power station, as electricity in western sections of Ashgabat was cut, while other parts of the capital experienced flickering lights and brownouts.