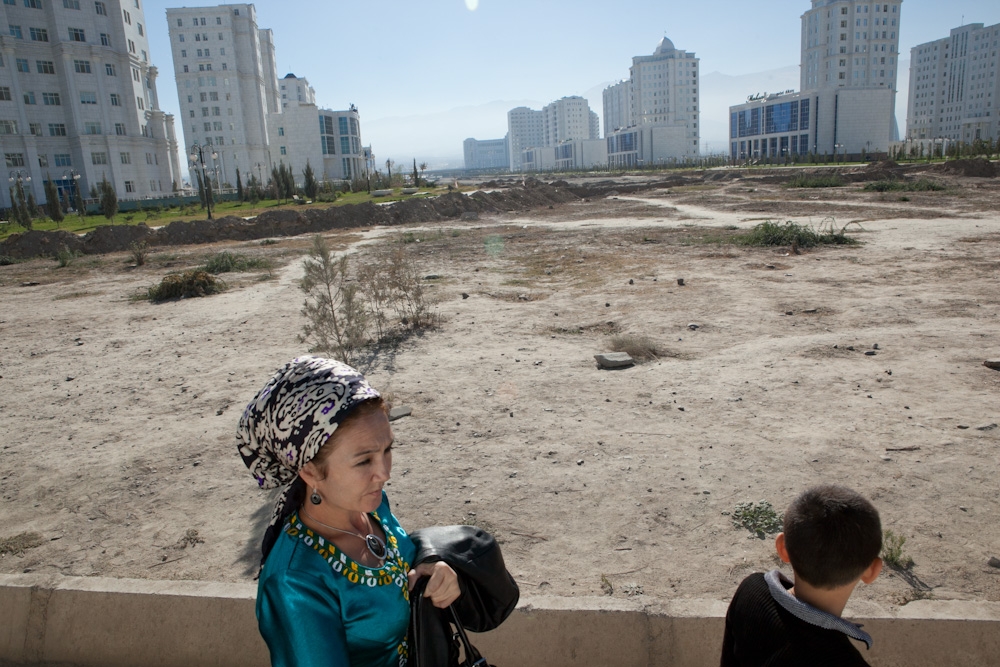 Turkmen, rather than Turks, will be building more of this. (EurasiaNet photo)

For the first time since independence over two decades ago, Turkmenistan’s government has entrusted a local construction firm with a major infrastructure-development project. The shift follows widespread complaints about arrears from Turkish companies that had previously performed most of the country's construction.The official Turkmenistan.ru website reported on August 8 that President Gurbanguly Berdymukhamedov had blessed a 1.41 billion-manat (almost $500 million) project: the capital Ashgabat’s 13th neighborhood. The project’s “chief peculiarity,” says the site: It has been “entrusted to private construction firms which are members of the Union of Industrialists and Entrepreneurs of Turkmenistan.” Russia’s Rosbalt news agency reported that this is the first time Turkmen construction companies had been contracted to carry out such a large-scale construction project: Previously, Turkish companies built all the important landmarks and neighborhoods in Ashgabat, while Turkmen firms fulfilled “minor projects in the country’s remote areas,” Rosbalt said. French firm Bouygues has also received contracts for large public works in Turkmenistan. The project, which is scheduled to break ground this month and be completed by February 2016, includes more of Ashgabat’s signature white marble-clad housing and administrative buildings. (The city recently received a Guinness citation for having more marble-clad buildings than any other on the planet. At that auspicious occasion, the polymath Berdymukhamedov was named “distinguished architect.”)  Almost 1 million square meters of floor space will house ministries and government agencies, says Turkmenistan.ru. Twelve-story blocks of flats will be constructed for employees of Turkmenistan’s foreign, defense, education, telecommunications, oil and gas, and agricultural ministries, as well as the state mercantile exchange, the Ashgabat city administration and the Union of Industrialists. The plan also includes schools, a clinic, a shopping complex and a car park.What could explain the shift to employing a local company? Arrears, possibly. It’ll be a lot harder for Turkmen companies to whine when they don’t get paid. Since 2011, a group of Turkish businessmen have complained that Ashgabat owes them over $1 billion for work performed. When they sought arrears, they said, they were told they would be paid after the next project. The Associated Press reported in July 2011 that 20 Turkish companies were threatening to join four that had already sought international arbitration.This May, businessman Faruk Bozbey told Azatlyk Radiosy (RFE/RL’s Turkmen Service) that the aggrieved Turks remain unpaid and are afraid to set foot inside the authoritarian country. “They [Turkmen authorities] tell us to come to discuss [this] in Ashgabat. No one goes to Ashgabat. [The firms] are afraid of going there because some [criminal] case may be opened against them. But we are ready to talk in a neutral territory in Turkey … or Switzerland or Austria,” Bozbey said.An undated statement posted this summer on the Turkish Foreign Ministry’s website says that “about 600” Turkish companies are registered in Turkmenistan. Since independence, they have performed more than $34 billion in construction work. The site does not say what percentage of those contracts has been paid.