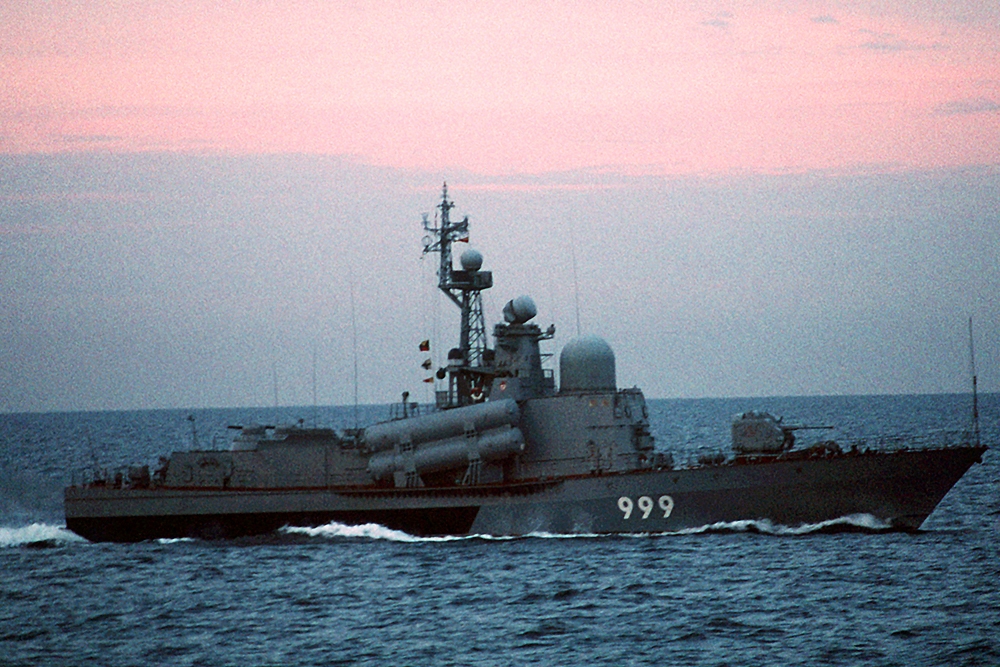 Turkmenistan builds up its naval capacity to secure its energy interests on the Caspian Sea. (Photo: US Defense Department)

When it comes to the brewing arms race in the Caspian Sea region, no one can accuse Turkmen leader Gurbanguly Berdymukhamedov of navel-gazing. Ashgabat is now able to back its claims to some energy-rich patches of the sea with considerable firepower.

Abundant energy resources under and around the sea have pushed all five littoral states – Azerbaijan, Iran, Kazakhstan, Russia and Turkmenistan – to bolster their naval capabilities. Analysts agree that Russia has the most powerful flotilla on the Caspian. But who is Number Two is a matter of debate.

Iran traditionally has played second fiddle to Russia on the Caspian. Currently, Tehran’s claim to a 20-percent share of the sea is generally considered the biggest obstacle standing in the way of a regional treaty that would facilitate large-scale energy extraction. Russia and other former Soviet states contend that Iran should receive only a 13-percent Caspian share. According to a late June report distributed by the semi-official Fars news agency, Tehran now plans to deploy an undisclosed number of “light submarines” in the Caspian. The Fars report did not specify how many subs would be deployed, what kind of armaments they would carry or when they would enter service.

According to a major Russian defense magazine, Turkmenistan is challenging Iran as the second leading naval power on the sea. In a special issue of Natsionalnaya Oborona (not online) distributed at the recent KADEX defense expo in Astana, Kazakhstan, a lengthy article detailed the most recent naval doings on the Caspian, and added a little analysis.

Last year, Ashgabat took delivery of two 12418 Molniya-class missile corvettes, Gayratly (Bold) and Edermen (Valiant). The two ships feature 16 Uran-E missile systems each, making them some of the most heavily armed ships on the sea. Iran currently doesn’t have anything that can match the missile corvettes. Turkmenistan, according to Natsionalnaya Oborona, is planning to procure three more Molniya-class corvettes in the near future.

“If Iran is leading in quantity of ships on the Caspian, in striking power Turkmenistan has already overtaken them,” the Natsionalnaya Oborona article stated. “Of course, we don't live in an era of linear boat flotillas. … Because of that the appearance in the young Turkmenistan navy two, albeit very strong, units does not make the difference, however they are clearly indicating the vector of their development.”

The report also notes that Turkmenistan also obtained two new Turkish fast patrol boats, and that naval infrastructure and a new naval base have been constructed at a “rapid tempo.”

US State Department cables obtained and released by Wikileaks contain some interesting tidbits on Turkmenistan's naval plans, as well. According to the cables, Turkmenistan started becoming interested in US military cooperation with their navy in 2007. One from June of that year described a meeting between Turkmenistan's Berdymukhamedov and the then-commander of US Central Command, Adm. William Fallon:

“[Berdymukhamedov] recommended both sides talk about ‘powerful equipment’ that the United States could provide to Turkmenistan to deal with the issue of Caspian security. The CIS' Caspian Force (CASFOR) had the mission of ensuring Caspian security, but because Turkmenistan was neutral, this was not an option for cooperation,” the cable stated. “Admiral Fallon acknowledged that it would be good for Turkmenistan to work with the United States to help maintain its neutrality and independence from CASFOR.”

The cable also noted that that Turkmenistan might be looking to obtain Excess Defense Articles (EDAs) from the United States, mentioning specifically the former USCG Cutter Point Jackson. “Turkmenistan government officials have rarely asked outright for assistance, but generally are appreciative when they receive it,” the cable said.

Another cable, however, indicated that US-Turkmen military cooperation would proceed slowly. The fact that Turkmenistan is buying its vessels and weaponry from Russia (and to a lesser extent, Turkey) suggests that the United States continues to play a secondary role in Caspian-related military developments.

Joshua Kucera is a Washington, DC,-based writer who specializes in security issues in Central Asia, the Caucasus and the Middle East. He is the editor of EurasiaNet's Bug Pit blog.