The president-in-waiting plans to change nothing. This and more in our weekly Turkmenistan briefing. 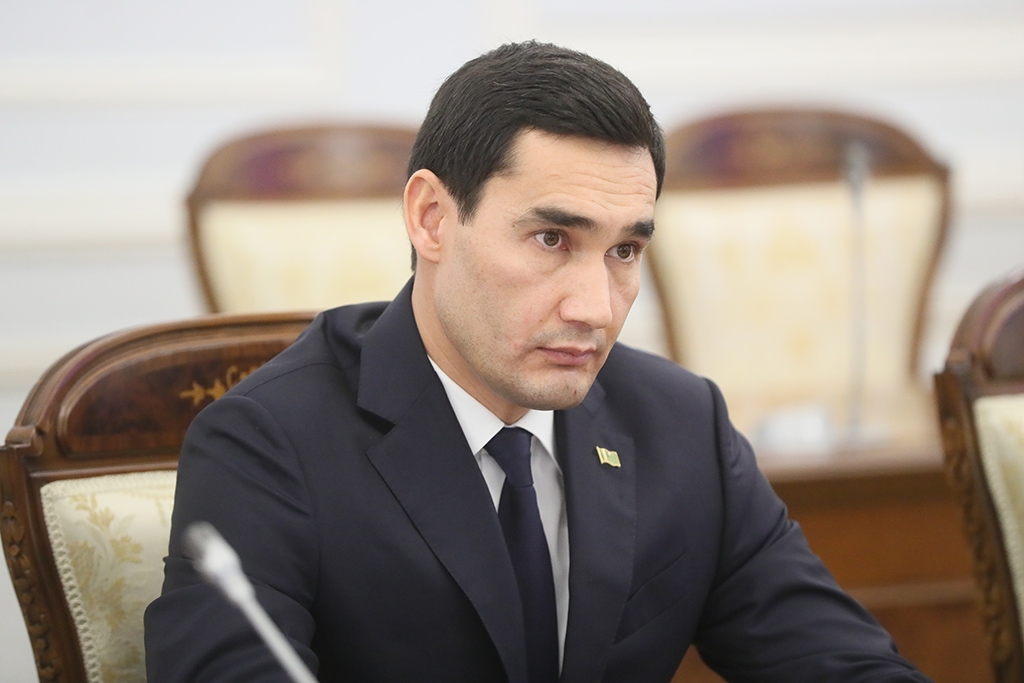 The dauphin appears poised to rule in tandem with his father – a likelihood obliquely hinted at through a piece of farcical theater last week. (government handout)

Campaigning for the March 12 presidential election has begun in earnest. For one person it has anyway.

The president’s 40-year-old son, Serdar Berdymukhamedov, hit the trail on February 21 in the Dashoguz province and talked about his core electoral pledge: to implement a 30-year development agenda approved by a gathering of lawmakers and community elders last month.

Within this promise there are two implied messages that will instill deep unease in the hearts of Turkmen people – Serdar plans to change nothing, and it looks like he expects to stick around for three decades.

“The constructive reforms initiated by President Gurbanguly Berdymukhamedov will be continued in future,” he said, alluding to his father.

There are scant reports in local media about what any of the other eight pretenders to the presidency are doing. This is probably because they are doing nothing, since Serdar is obviously going to achieve a crushing victory. The hopeless saps being made to perform the role of also-rans comprise three candidates nominated by the imitation opposition political parties in parliament; six more were put forward by public associations.

State media is at least providing candidates with some space to share their bland pledges, all of which revolve around specifics-free assurances of an improvement in living standards. In the February 25 issue of state newspaper Neutral Turkmenistan, it was the turn of Agrarian Party nominee Agadzhan Bekmyradov to have his biography and platform published. Needless to say, there was effusive praise for the soon-to-be ex-president.

“Thanks to the tireless creative work of our esteemed president, our homeland has achieved great successes in the economy, healthcare, social affairs and in other spheres over a short period of time in history, and the international prestige of our country has increased,” Bekmyradov gushed.

There will be no observers from any useful international organizations keeping an eye on things. But a group of monitors from the Commonwealth of Independent States did begin pretending to do the job on March 1. The head of this delegation, Leonid Anfimov, first deputy chairman of the CIS executive committee, said his mission’s objective is to “promote the holding of free and democratic elections.” The actual job of the CIS observer missions, however, is to run up a presumably huge drinks bill in the hotel bar before perfunctorily giving their stamp of approval to ersatz elections.

The Organization for Security and Cooperation in Europe, meanwhile, which should by rights not be going anywhere near these elections, is also doing its own little bit to lend the vote some legitimacy by offering seminars to Turkmen polling officials. Plans for these training sessions were discussed via video conference call by Foreign Minister Rashid Meredov and Craig Jenness, the director of the electoral assistance division at the United Nations Department of Political Affairs. Clearly, the Turkmens have no interest in conducting a proper election – representatives of foreign organizations know this full well, and yet they still insist on providing cover for Ashgabat’s pathologically brutal and anti-democratic regime.

On February 23, Serdar traveled onward to the Lebap region, where he again reprised themes beloved of his father by vowing that he would develop the culture of physical fitness and competitive sport.

Health is evidently going to be an idée fixe in the age of Berdymukhamedov 2.0. At the February 25 Cabinet meeting, the now-lame duck President Berdymukhamedov heard the details of a “National Program for Turning Turkmenistan into a Tobacco-Free Country 2022-2025” action plan. Getting Turkmens off cigarettes once and for all by 2025 would surely “increase the well-being of the people,” Berdymukhamedov told his underlings.

As has been well-established by now, though, the Turkmen government has crackpot notions about what is in the interests of the population’s wellbeing. Officials have lied tirelessly about the country having recorded no cases of COVID-19, leaving people entirely in the dark about what level of precautions they should have been taking in the two years since the pandemic broke out. Until very recently, this omission could have generously been attributed to lack of testing capacity, but even that slim excuse was invalidated last month, when the government received PCR-based testing equipment under a $20 million World Bank program.

The COVID-19 crisis has also brought with it a sustained onslaught of quackery.

Back at a Cabinet meeting in December 2020, the president harped on about the virtues of licorice roots, which he asserted, with the confidence befitting the author of a dozen or so books about medical plants, were used in antiquity to treat coughs and respiratory diseases. He then instructed the Academy of Sciences to conduct more research into the beneficial properties of licorice.

This order has produced new dividends. On February 25, the state newspaper Neutral Turkmenistan reported that Academy of Sciences researchers, if that is the proper term, have devised a method for enriching bread with licorice, thereby turning it into an allegedly coronavirus-preventing foodstuff. The academy has now provided instructions on how to make this bread to a retail company owned by the Agriculture and Environment Ministry.

If any details were forthcoming, this sideshow might have offered some insight into one of the more confounding decisions adopted during the Berdymukhamedov presidency; namely, turning the Academy of Sciences into a self-funding entity. The policy took effect at the start of this year. As it is, there is no information available about what, if any, return the researchers will be making on their bold discovery of licorice bread.

Uncertainty lingers about Berdymukhamedov will do after he steps aside. The expectation is that he will hover around in the background, not least since he will still occupy a position as chair of the Senate, making him the back-up president in the event of the incumbent being unable to perform his duties.

One distinct possibility is that father and son will operate in tandem – a likelihood obliquely hinted at through a piece of farcical theater last week.

On February 23, the state broadcaster revealed in the evening news that the president had begun work on another new book (he has more than 70 of them to his name to date). This one will be about Akhal-Teke horses.

In search of inspiration, Berdymukhamedov visited the state stables. The president was shown a recently born foal that was named Zaman (Epoch), at the request of the director of the stables. The name is intended to symbolize the beginning of a new stage in the country’s development, state media noted.

But that was not all. An Alabai sheepdog puppy was born at the same time as Zaman. This animal will be called Eiyam (Era), also, somewhat confusingly, in honor of the new period of development in Turkmenistan.

State television then showed the foal and puppy somewhat unenthusiastically frolicking together. One part of the segment displayed Berdymukhamedov standing outside the animal enclosure waving at Zaman at length. There was clearly some intended Aesopian merit to all this, although the exact significance was not immediately obvious. Are the foal and puppy meant to symbolize the father and son working harmoniously side by side? Or was Berdymukhamedov waving farewell so demonstratively meant to signify his intent to depart the scene?

As far as Turkmenistan is concerned, Ukraine might as well be on the other side of the galaxy. Russia’s invasion has generated no response in Ashgabat. It has even failed to have any discernible effect on the black-market rate for the Turkmen manat, very much in contrast with the turbulence being experienced in some other countries in the region.

Turkmenistan is still fixated on its most immediate foreign priority, which is to make progress on a pair of trans-Afghan energy projects: the TAPI gas pipeline and the TAP high-voltage power distribution line. The Kabul Times on February 28 reported that Taliban officials met with the Turkmen ambassador and the chief executive of the TAPI project to brief them on their plans to provide security for construction work. The safety risks around TAPI have always been considered the main impediment to the project getting off the ground. If the Taliban can offer any peace of mind on that front, all that will be left to do is raise the several billion dollars needed to pay for construction work.