The future shape of Sino-Turkmen cooperation is going to be one of Serdar Berdymukhamedov’s biggest challenges. This and more in our weekly briefing. 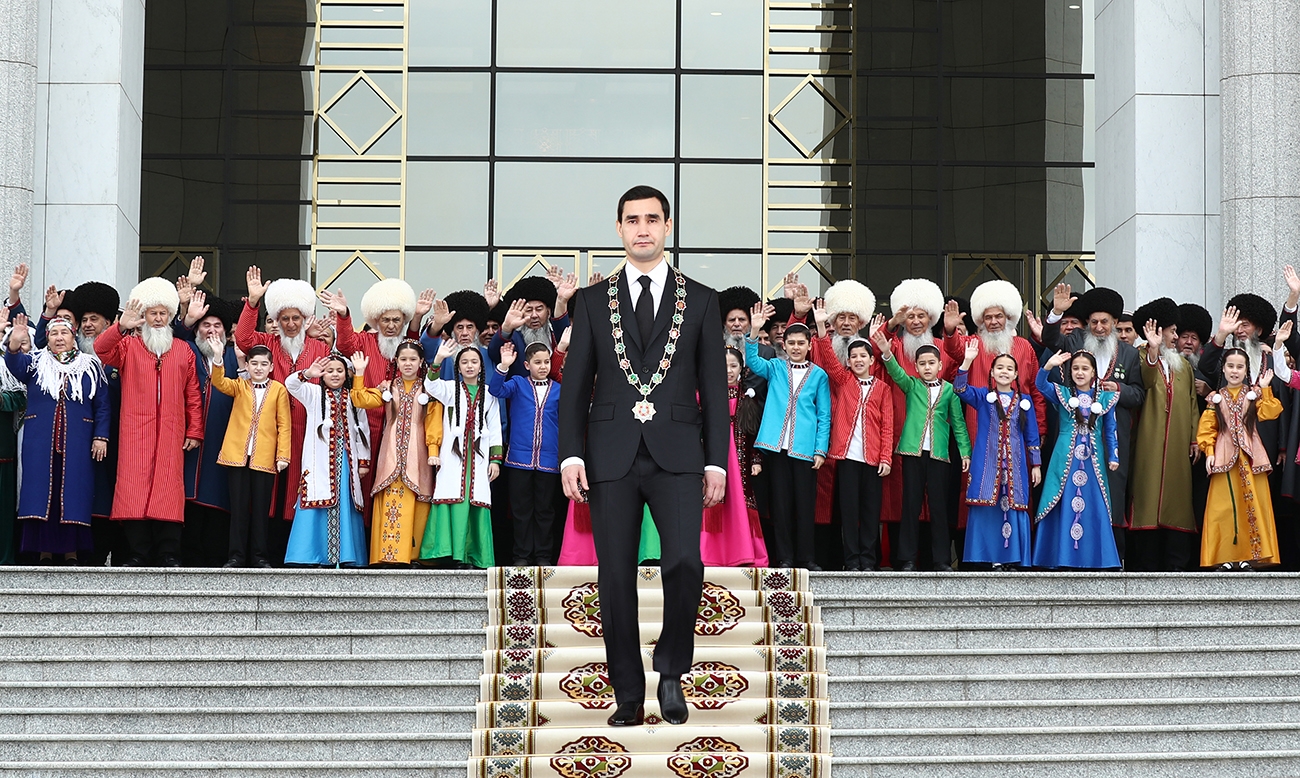 Serdar Berdymukhamedov, 40, was inaugurated as Turkmenistan’s third president on March 19, ending a transition process years in the making.

Transition may be too strong a word, however. His coronation at the Rukhyet Palace in Ashgabat was an aggressive celebration of continuity.

Proceedings opened with the head of the Central Elections Commission, Gulmyrat Myradov, reminding an audience composed of government officials, town elders and representatives of the diplomatic community of the results of this month’s vote. Losing candidates took turns to stand, nervously looking to the ground as they were informed of their performance. When Berdymukhamedov was reminded of his vote tally – 73 percent of ballots cast – he reacted with his trademark dour impassivity.

After a performance of customary formalities mandated by law – a white felt mat was laid out on the stage for the president-elect to cross, and he was then presented with a sachak, bread wrapped in a tablecloth, a symbol of well-being and prosperity – Berdymukhamedov proceeded to take the oath of allegiance. While the constitution and the Koran both got an airing, the Rukhnama, the nonsense spiritual-historical treatise penned by Turkmenistan’s late President Saparmurat Niyazov, which is also supposed to play a part in the presidential inauguration ceremony, was not featured.

Berdymukhamedov’s speech was a reprisal of the best hits of his 64-year-old father, the outgoing president, Gurbanguly, who was present in the hall. Turkmenistan will be stable, neutral, prosperous, open to the world, and so forth.

In one passage, Berdymukhamedov pledged that Turkmenistan would bolster cooperation with, among other international financial institutions, the International Monetary Fund. The last time the IMF dispatched a mission to the hermit kingdom was in 2019.

Elsewhere, the new president signaled the government’s intention to buy more modern and advanced weaponry. Turkmenistan has not had to fight any wars over its three-decade history of independence, but Berdymukhamedov the elder was nevertheless eager to see his country armed to the teeth.

At the Independence Day parade in September, a freshly acquired Bayraktar TB2 unmanned combat aerial vehicle, a piece of Turkish-produced weaponry that Ukraine appears to be using to great effect against invading Russian troops, was given its first showing in public. It feels probable that Ashgabat, which is very friendly with Moscow, but still highly cautious, may be looking to buy more of the drones.

The rest of the day was a whirr of grand ceremonies. Berdymukhamedov was seen out of the Rukhyet Palace by waving children and town elders. After that he was escorted by a cavalry procession to the presidential palace, where he inspected parading troops. It was at this stage that Berdymukhamedov performed the formality of signing a decree to dissolve the government, which will in any event continue its duties before being reconstituted. At a reception later in the day, pop performers sang the praises of the new president and his father. Clerics at the Hazret Omar Mosque in Ashgabat did their bit by offering their benediction to the new leader. The day ended with a fireworks display.

When the older Berdymukhamedov came to power in 2006, he began his presidency with all manner of commitments to humility. One policy announced a few months into his first term was the abolition of the practice of mounting celebratory concerts every time the president traveled to the regions. Before long, however, he was consumed by the incessant adulation and eventually attained the heights of dizzying megalomania scaled by Niyazov. 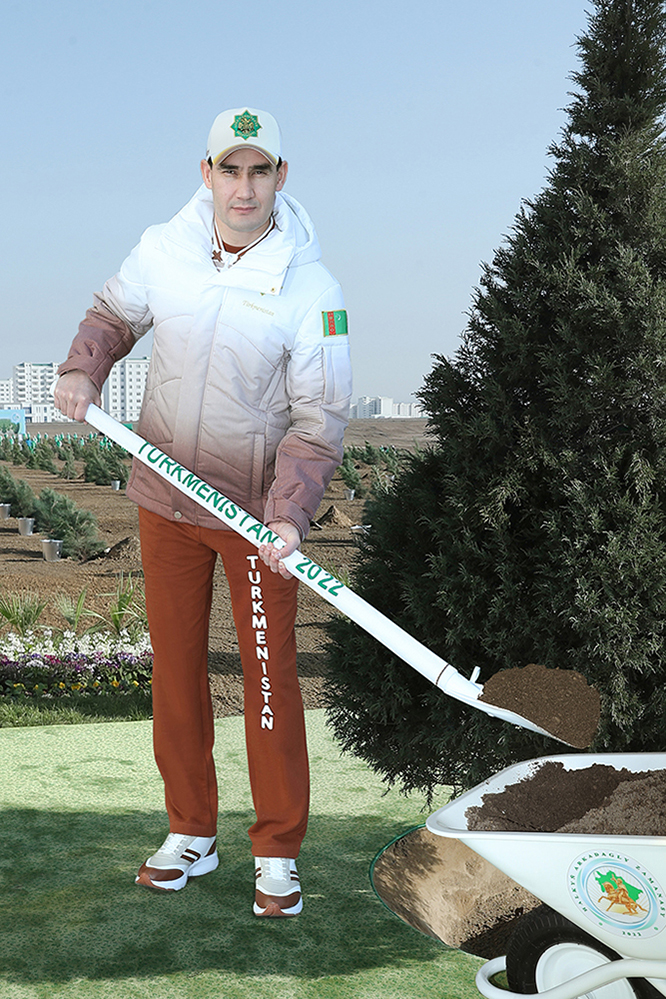 Unless he intends to strike out at the plans made for him, Berdymukhamedov the younger may not even get the chance to affect false humility.

The timing of the inauguration ceremony was, with the heavy-handed symbolism favored by Turkmen state propagandists, timed to take place on the eve of Nowruz, the spring equinox festival ostensibly representing renewal. Indeed, no sooner had celebrations for the inauguration ended that Berdymukhamedov was out in his tracksuit taking part in a mass ersatz-voluntary tree-planting exercise. He was met at the planting site by the very same type of concert that his father once professed to disdain.

Attention will now be paid on where the new president will choose to make his first visit abroad.

As the government newspaper Neutral Turkmenistan and others have reported, invitations have already arrived from several countries: namely, Azerbaijan, Iran, Kazakhstan, Kyrgyzstan, and Turkey.

When Uzbekistan’s President Shavkat Mirziyoyev assumed power in 2016, he made his first trip overseas, in March the following year, to Turkmenistan. The state visit to Ashgabat was unambiguously intended to signal his regime’s intention to work first and foremost on improving regional ties.

It was perhaps fitting then that Mirziyoyev was, on March 15, one of the first foreign leaders to get on the phone with president-elect Berdymukhamedov in a three-way conversation also involving the older Berdymukhamedov.

Will Serdar repay Mirziyoyev’s 2017 visit with one of his own in the coming weeks? Favoring a neighbor for the honor of a maiden foreign state visit – maybe even Kazakhstan – would be a helpful way for the young president to avoid falling prey to suggestions that he is beholden to one or other major global power, such as Russia or China.

As it happens, though, a phone call was placed, also on March 15, between the Berdymukhamedovs and Russian President Vladimir Putin.

The Berdymukhamedovs and Chinese President Xi Jinping spoke one day later. After the older Berdymukhamedov exchanged some words with Xi, he “passed the handset to the newly elected president of Turkmenistan,” as the state news agency observed in a tender little detail. The two men professed satisfaction over development of ties in “political, diplomatic, trade, economic, cultural and humanitarian spheres,” but it is plainly obvious that there is only one serious topic of conversation to be had between China and Turkmenistan.

“The fuel-and-energy sector is … a priority of the bilateral partnership,” the state news agency noted. “Implementation of joint projects for the construction of a transnational gas pipeline, through which Turkmen [natural gas] is supplied to China, is a visible symbol of the mutually beneficial combining of efforts.”

These niceties are all well and good, but the future shape of Sino-Turkmen cooperation is going to be one of Serdar Berdymukhamedov’s biggest challenges. When his father visited Beijing in January, he broached the topic of the long-projected fourth strand of the Central Asia-China pipeline, also known as Line D, and appeared to be attaching conditions.

“In the course of future cooperation on implementation of a fourth line construction project, it is necessary to start discussing gas prices,” he was cited as saying by Turkmen state media at the time. “Turkmen and Chinese specialists will operate on the basis of global precedent in the field of pricing for commercial pipeline gas.”

Only once an agreement on that point has been reached will Turkmenistan “consider the participation of a Chinese company in the development of the second phase of the Galkynysh field,” Berdymukhamedov then said.

It is not immediately obvious, though, that Turkmenistan has much room to drive a hard bargain in its dealings with China.

One possible upcoming foreign appointment was flagged up by Kyrgyz President Sadyr Japarov, who invited Berdymukhamedov to attend the fourth consultative meeting of Central Asian heads of state scheduled to take place on the shores of Lake Issyk-Kul on July 21.

In another important diplomatic development, the Taliban last week installed its own ambassador to Ashgabat. By accepting the credentials of Haji Fazal Mohammad Sabir, Turkmenistan becomes the first country in Central Asia to accommodate a diplomat representing the self-styled Islamic Emirate of Afghanistan.

This was a foregone conclusion. Turkmenistan was swift in engaging in dialogue with the Taliban regime that seized power in August 2021 and has since then been busy with negotiations over implementation of the trans-Afghan TAPI natural gas pipeline project and a parallel high-voltage power transmission line project. This very fact was alluded to by Turkmen Deputy Foreign Minister Vepa Khadzhiyev, who attended a ceremony at the Afghan mission in Ashgabat.

“We have big projects like TAP, TAPI and others. We are attempting to implement them through embassy cooperation,” Khadzhiyev was quoted as saying by Ariana News.