The Turkmen leader went hurtling over the mount’s shoulders, landing face first on the track. 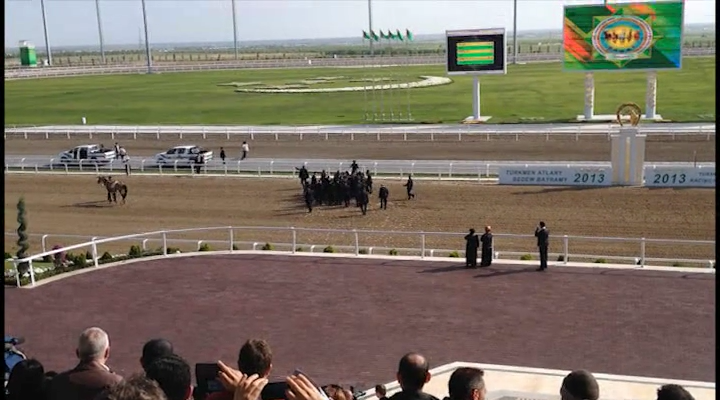 State controlled media in Turkmenistan likes to portray President Gurbanguly Berdymukhamedov as a demi-god. But Berdymukhamedov proved all too human in taking a scary tumble at the racetrack.

In an account relied upon by international news agencies, Turkmen State television showed footage of a race, staged April 28, in which a horse ridden by Berdymukhamedov won an $11-million purse. What viewers didn’t see, however, was Berdymukhamedov’s bad spill just after crossing the finish line.

Footage of the race obtained by Eurasianet showed Berdymukhamedov’s horse leading throughout and winning by about a length-and-a-half. But immediately after completing the one-kilometer course, Berdymukhamedov appears to shift in his saddle and the horse stumbles. The Turkmen leader then goes hurtling over the mount’s shoulders, landing face first on the track. The momentum of the fall appeared to roll him over onto his back before he lay still. Other horses narrowly missed trampling him.

Ministers and security officials in black suits ran out onto the track as the crowd slowly began to realize the seriousness of the situation. The motionless Berdymukhamedov, who was apparently briefly knocked unconscious, was haphazardly lifted in a manner that could have left him paralyzed, if his spine had been injured. Security officials in the crowd waved for cameras to stop filming and snarled at those that continued. An ambulance sped out onto the track and the huddled ministers and security officials loaded Berdymukhamedov inside, to be whisked away to receive medical attention.

For approximately an hour it was not clear if Berdymukhamedov was alive or dead, or how injured he might be. Security officials had little idea what to do. Along with dignitaries in the stands, they sat uncomfortably in their seats, sure only that leaving the stadium was not an option. Finally, state cameramen arranged themselves and Berdymukhamedov briefly presented himself, moving stiffly but able to wave to the crowd, which cheered.

Those dependent on state media for information saw and read nothing about Berdymukhamedov’s spill. For state-controlled media, it was as if reporting hit the freeze button the moment the snout of Berdymukhamedov’s horse -- named Berkarar, or “Mighty,” -- crossed the finish line. Berkarar was of the indigenous and rare Akhal Teke breed, horses that are famed for their speed and endurance.

Details about the race offered in the state-controlled press differed substantially from the images caught on tape. An account published by the government’s official mouthpiece, the Neytralny Turkmenistan daily, turned the race into a photo finish, with Berdymukhamedov’s skill as a jockey determining the outcome.

“The spectators' attention was riveted on the golden arrow – “Berkarar, led by the leader of the nation,” went the newspaper account. “All was decided by fractions of a second, and Berkarar was the first to cross the finish line."

"President Gurbanguly Berdymukhamedov has yet again demonstrated not only his high class as a horse rider, but also his strong will, firmness and courage," the report added.

Shortly after Berdymukhamedov’s spill, security forces fanned out into the crowd and forced attendees with cameras inside the stadium. The doors were locked and anyone with video or photos of Berdymukhamedov's fall was forced to delete them. University-age volunteers also kept an eye on attendees in an attempt to prevent anyone from hiding camera memory cards.

Most international news reports on the event that ran April 29 relied on Turkmenistan's state-controlled media, which made no mention of the president's humiliating fall or the security force imposed black-out.

Hundreds of invited guests, including journalists and members of top horse-racing clubs from around the world, were at the Ashgabat racetrack as part of an all-expenses-paid junket and witnessed Berdymukhamedov’s spill. The race had been organized in conjunction with the country's annual four-day horse festival, traditionally held in late April.

The festivities featured a horse jumping exhibition, a long speech by Berdymukhamedov in which he explained the importance of horsemanship in the country’s cultural heritage, an exhibition where international companies showed off equestrian goods they hoped to sell in Turkmenistan, an equine beauty contest, and, finally, the ill-fated race.

When the day’s full slate of races had been completed April 28, Berdymukhamedov again appeared to present the winners with awards and make a speech that seemed slurred, possibly by heavy pain killers. He also indicated that he would distribute the $11 million that he won to an entity that promotes the Akhal Teke breed.

Finally, Berkarar was led back out onto the track. The Turkmen leader, who is known for his love of horses, tried to kiss it, but it shied away. He persisted, pulling it close. And the horse was forgiven. The crowd cheered.

In Turkmenistan, it seems that only a horse can buck Berdymukhamedov and get away with it.