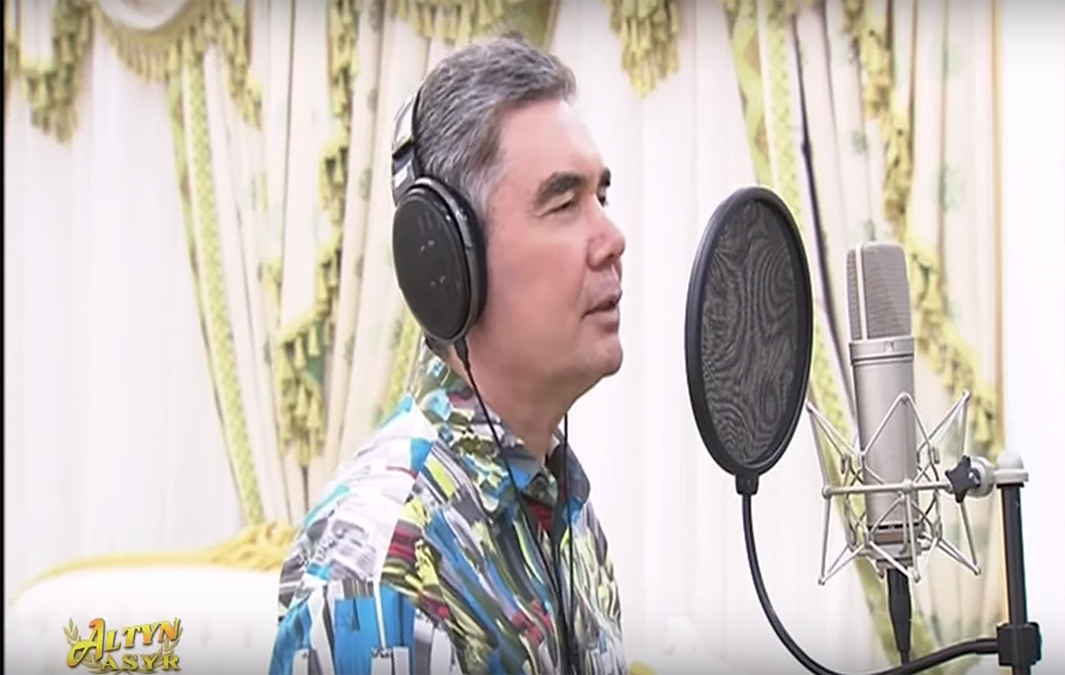 State media in Turkmenistan have served up a fresh smorgasbord of pictorial evidence that the president is not just alive, but positively brimming with energy.

Almost the entirety of the August 4 evening news bulletin was devoted to a recap of Gurbanguly Berdymukhamedov’s summer activities. These purportedly took in horse-riding, some light cycling, bowling, off road driving around a permanently blazing crater, working on a new song in the recording studio, training sessions down at the gym and putting the final touches on a history of a Turkmen dog breed.

The effort that government media has put into this spectacle indicates that they have felt the need to definitively put rumors to rest that Berdymukhamedov had died or was somehow incapacitated.

The certain last semi-public sighting of the Turkmen leader was on or around July 5, when he presided over a government meeting. Weeks after that, opposition-leaning Turkmen exiles cited what they said were insider sources as saying that the president had succumbed to kidney failure.

As if to confirm that account, Berdymukhamedov has been a ghost. He surfaced momentarily on TV news on July 24 in a report about plans for bus stops in a new residential area under construction outside Ashgabat. But even that raised doubts among those like RFE/RL’s Tolkun Umaraliev, who suspected this might have been recycled footage.

The summer holidays material is not only much richer in scope – it is intended to convey a multitude of supplementary messages.

First is the idea that Berdymukhamedov is in fine health. Otherwise, how would be able to ride a horse and cycle?

And not just that. He continues to excel. When he takes a trip down to the bowling alley with his minions, one clumsily throws his ball into the gutter. The president, meanwhile, knocks all the pins down with consummate ease. (Online cynics have ventured to suggest that this accomplished performance was less than it seemed and that Berdymukhamedov was flattered by some craftful editing).

Of course, for those determined to believe this is all a great deception, the choreography will do little to allay suspicions. Berdymukhamedov rarely appears before the great unwashed in any case, but that would surely be the way to quash chatter once and for all. As it is, the amateur sleuth has only tidbits to work off.

The scene showing the president trotting and cantering is filmed under a waning crescent moon, which suggests it would have filmed around the last week of July – if it was filmed recently that is.

And yet, what to make of his stiff appearance? His near immobile right arm?

For reassurance on that front, the Watan bulletin takes the viewer to the shooting gallery, where Berdymukhamedov is seen in a sleeveless camo wife-beater, firing an assault rifle at a target. The newsreader explained that he was testing the weapon, which had recently been acquired by the Turkmen armed forces.

All the rounds, it should go without saying, land in the dead center of the human cutout figure. The intended sense here is of an accomplished martial mind casting his granular eye over all matters of national security.

The image of the assured leader tending to his flock of addled sheep is a recurrent strain in the Berdymukhamedov myth-making operation. Ministers and other senior officials routinely come in for savage browbeating for their chronic incompetence – a fact that sits uncomfortably with Ashgabat’s tireless insistence that all is well and that nothing could be better.

The summer holiday bulletin makes this point very literally by showing Berdymukhamedov helping members of his retinue, all top government officials, learn how to make proper use of gym equipment. In this capacity, at least, he truly is a hands-on leader.

But then again, the thematic significance of some of Berdymukhamedov’s escapades are harder to divine. In one lengthy section he is seen tearing through the desert on an off-road vehicle – a fact that state media contrives to argue is being done in the interests of promoting motorsports in Turkmenistan.

What can an average viewer surmise when watching aerial images of the president supposedly doing doughnuts just meters from the edge of permanently burning Darvaza gas crater, known better by variations on its nickname, Door to Hell?

This wealth of antic-filled footage should be scuttlebutt-scotching, but it only generates more questions. Even state media reports appear to be conceding at this stage that Berdymukhamedov has been “on holiday” for at least three weeks now – a yawning infinity by the standards of Stakhanovism that government information machines in the region like to ascribe to their leaders.

While regular Turkmens are struggling increasingly to make ends meet, Arkadag, or Protector, as Berdymukhamedov is more commonly known to his own people, is idling in the recording studio, performing and mixing a song written by his grandson, Kerimguly (or Kerim, as the newsreader calls him, testing the diminutive form of the name for size). The report, alas, offers only brief hints of “Live Turkmenistan! Only Forward with the Speed of a Horse!”

And finally, there is Berdymukhamedov’s contribution to collective human knowledge, in the form yet another book.

“The head of state in every way possible promotes learning and development, helping to discover new details about the history of our people,” the state news agency intoned.

This time, Arkadag is writing about alabai shepherd dogs. Animal-lovers will recall that this is the breed of dog that Berdymukhamedov so roughly handed Russian President Vladimir Putin as a gift in 2017.

In the style of a kidnapper getting an abductee to hold up the day’s newspaper, state television showed Berdymukhamedov putting the final touches to his alabai book by signing the date – August 4, 2019. While working on the book, he also glances at the television set, showing pointedly that it was 7 a.m. on August 4, 2019.

Message clear. He is in charge. He is great. He is alive.