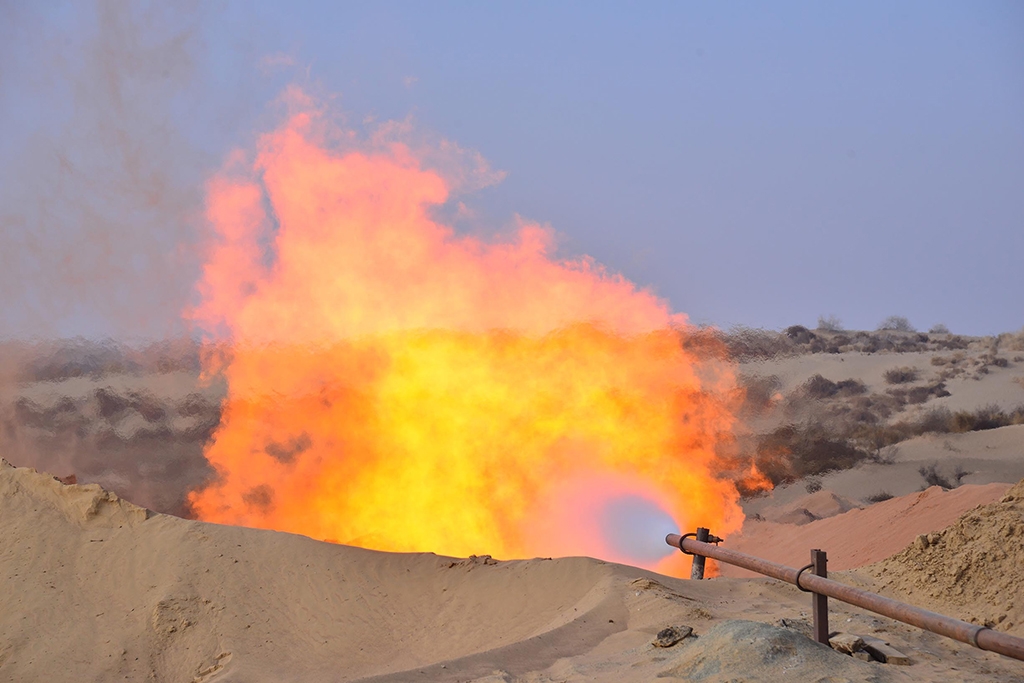 Sometimes it’s easier to burn off the gas than find a buyer. (Turkmen government website).

It was supposed to be a banner year for Turkmenistan’s natural gas industry.

There was a time when it was predicted that the Central Asia-China pipeline would be transporting 65 billion cubic meters of Turkmen gas annually by 2020.

The project to build a trans-Afghan pipeline to India, TAPI, was also supposed to have come into dock by now.

The delays are only partly fruit of misfortune. Inertia and lack of investment have played their bit too.

The Central Asia-China pipeline is currently comprised of three strands together capable of carrying 55 billion cubic meters (bcm) of gas per year. Turkmenistan takes up most of that room, but it still has to share with neighboring exporters.

Since it was launched in 2009, the pipeline has transported 290 bcm of Turkmen gas to China. Another 46 bcm was provided by Kazakhstan and Uzbekistan.

Achieving larger volumes would require completion of a route going through Uzbekistan and Tajikistan known as Line D, for which 30 bcm of annual capacity has been proposed.

Progress there has ranged from glacial to non-existent, however – a fact that convinces many analysts that China sees it as a low priority.

The authors of an Oxford Institute for Energy Studies paper published in 2019 predicted that the line was “unlikely to go ahead until it is seen as strategically necessary by China.”

“That is probably not before the late 2020s,” the paper’s authors concluded.

Who else is there?

In 2019, Turkmenistan renewed gas deliveries to its former top customer, Russia, bringing a close to a three-year hiatus. This is thin gruel. Those exports there are capped at 5.5 bcm per year. Iran, another customer that once reliably bought modest volumes, has ceased purchases altogether.

The pandemic laid bare Ashgabat’s dependence on China when Beijing issued its Central Asian partners with a force majeure notice in March warning of an imminent decrease in purchases. Sure enough, the value of imports from Turkmenistan – which comprise almost exclusively natural gas – shrank by 30 percent in dollar terms last year compared to 2019.

Laurent Ruseckas, an executive director at IHS Markit, told Eurasianet that he believed 2021 would see a return to pre-pandemic volumes, but saw no strong need for Beijing to ramp up imports from Central Asia in the near future.

“To some extent [China] can play the three suppliers off one another,” Ruseckas said.

Turkmenistan is banking on China all the same.

Earlier this month, President Gurbanguly Berdymukhamedov oversaw the inauguration of a colossal compressor station that the government says will help double the volume of gas being pumped into the Central Asia-China pipeline. A government website stated in April that 673 million Turkmen manat ($192 million at the official exchange rate) had been allocated for construction.

At the heart of these ambitions is Galkynysh, the world’s second-largest gas field. Discovered in 2006, Galkynysh holds at least 27 trillion cubic meters of gas, according to the most recent audit.

China National Petroleum Company, or CNPC, secured a $10 billion production-sharing agreement for the field in 2009 – the year the Central Asia-China pipeline came online.

First-phase development of the field was dominated by CNPC, which spent at least $8 billion on the project. Annual production plateaued at 30 bcm in 2016. CNPC is the lead contractor for second-phase development.

But this “will depend on an uptick in export demand, which is unlikely in the near future,” Ruseckas argued. “It is a huge field and there are many potential future phases, but the gas needs to find some place to go.”

With a price tag of up to $10 billion and a design annual capacity of 33 bcm, TAPI represents the biggest opportunity for easing Turkmenistan’s China fix.

At a briefing on January 16, Turkmen Foreign Minister Rashid Meredov said he expected construction of the Afghan section to begin in August 2021.

The 1,800-kilometer project has regularly seen such deadlines pushed back. Security is a big worry, as is money. The four governments involved have asked the Asian Development Bank to weigh in with finance for the project. Turkmenistan appears to hope Middle Eastern governments, maybe Saudi Arabia, might be tempted to pitch in too. Otherwise, big-ticket investors are hard to come by.

And while India and Pakistan have repeatedly stated their commitment to TAPI, New Delhi has complained about the price agreement that the four countries struck in 2013.

Europe is another willing buyer.

Five years ago, Turkmenistan completed work on a $2.5 billion cross-country East-to-West pipeline. This route was built with the aim of enabling the shipment of gas from eastern fields through Azerbaijan and onward to Europe via the Trans-Caspian pipeline.

The problem is that that pipeline does not yet exist. The European Union is known to be a champion of the idea, but a specific, firm project with clear costings has yet to materialize.

Although Turkmenistan stands to be a significant beneficiary of such a pipeline, it has shown no clear willingness to underwrite what would doubtless be a costly undertaking.

As an Atlantic Council blog last year pointed out, Turkmenistan would have to build compressor stations along the east-west pipeline to make the project feasible.

With pipelines proving elusive, Turkmenistan has been forced to look within for opportunities to monetize its gas.

A government press release on the opening of the Malai gas compressor station this month alluded to “industrial giants specializing in deep processing of hydrocarbon raw materials” as being an important plank of the economy.

Examples of this type of diversification include the $3.4 billion Kiyanly petrochemical plant built in 2018 and a $1.7 billion gas-to-liquids plant close to Ashgabat.

The Oxford Institute for Energy Studies paper cast the new plants as “the most significant increment to gas demand in recent years” for Turkmenistan, with Kiyanly absorbing 5 bcm annually.

But the authors cautioned that the success of these debt-funded endeavors “will depend on market conditions, and Turkmenistan’s ability to compete in them.”

At least one gas-powered industrial project is turning out to be something of a white elephant. Less than four years on from its inauguration, the $1 billion Garlyk potash mining and processing plant built for Turkmenistan by Belarusian state-owned chemicals company Belgorkhimprom has posted only a fraction of its intended output. That has left Berdymukhamedov grumbling that the Belarusian investors failed to honor the project design.

The plant is now the focus of a bitter arbitration case in Stockholm over unpaid fees.