Turkmenistan is trying to assume the role of energy supplier to Central Asia. Plus, showing off weapons while cash is tight. Our weekly Turkmenistan briefing. 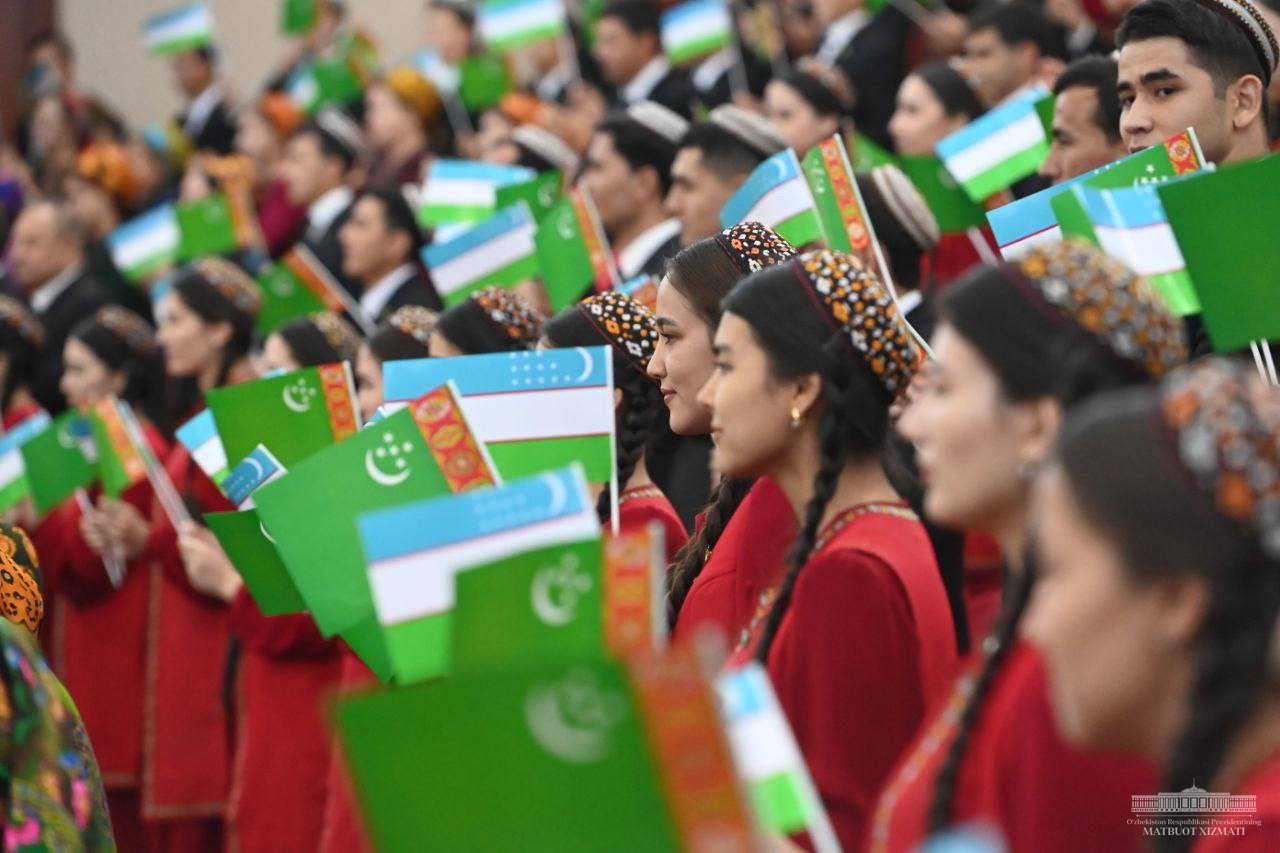 The president of Uzbekistan is now Professor Shavkat Mirziyoyev.

Mirziyoyev earned that honorary title during his tour of the Magtymguly Turkmen State University in Ashgabat, which he visited on October 21.

The Uzbek leader’s trip to Turkmenistan is only more evidence of the warmth between two nations that have at times in their post-independence history regarded one another with suspicion.

The headline takeaway from Mirziyoyev visit was the proclamation that Turkmenistan and Uzbekistan have established an “in-depth strategic partnership” and agreed to hold regular high-level meetings. One aspect of this partnership is the mutual recognition of “the inviolability of [one another’s] borders,” which is no small matter since border demarcation is still an ongoing process.

When Turkmen President Serdar Berdymukhamedov visited Uzbekistan’s capital on a state visit in July, one point in a joint statement with Mirziyoyev noted with approval the work being done by the joint Turkmen-Uzbek intergovernmental commission on border delimitation and demarcation issues.

On a more immediate matter, Berdymukhamedov and Mirziyoyev took part via videoconference in the foundation-laying ceremony of a free trade zone in a location along the border of Turkmenistan’s Dashoguz province and Uzbekistan’s Khorezm province. The Uzbek president’s office offered some hints as to what this facility will end up looking like with its talk of trade pavilions, warehouse facilities, container sites and office space for businesspeople.

One item that Uzbekistan will be eager to begin importing from Turkmenistan in short order is gas. Although Uzbekistan is relatively well-endowed in gas reserves, the prospect for the future looks unpromising, as the Paris-based International Energy Agency noted in a June report.

“At the current rate … [Uzbekistan’s] gas reserves will be depleted in less than 20 years, while the government foresees natural gas demand rising by 30 [percent] to 65 [billion cubic meters] by 2030,” the IEA concluded.

Speaking alongside Mirziyoyev, Berdymukhamedov said that his government looked forward to expanding cooperation on energy with Uzbekistan.

It is thus that Turkmenistan is trying to assume the role of energy supplier to the region.

When Berdymukhamedov went on his first-ever state visit to Kazakhstan earlier this month, his host, President Kassym-Jomart Tokayev, talked about his country’s interest in reaching a long-term agreement to import 1.5 billion cubic meters of gas per year from Turkmenistan.

This vision has hit some speedbumps along the way, though. When Kyrgyz President Sadyr Japarov went to Ashgabat in June 2021, he came away with a provisional deal for Turkmenistan to supply his country with gas in the fall-winter period. Deputy Kyrgyz Energy Minister Taalaibek Ibrayev revealed this April, however, that this deal ultimately fell flat because it was “economically unprofitable.” But energy trading has panned out in another way, as Ibrayev explained. The 270 million cubic meters that Kyrgyzstan had contracted to import from Turkmenistan was delivered to Uzbekistan, which in turn used that fuel to generate power. Kyrgyzstan thus indirectly received that energy in the form of 1.3 billion kilowatt hours of electricity from Uzbekistan, Ibrayev said, without mentioning any of the financial arrangements.

On October 24, Berdymukhamedov headed west to the Caspian coast to oversee a military readiness drill involving ground, air and navy forces. For Turkmenistan, these exercises are typically an opportunity to show off the amount of weaponry at its disposal, and this was no exception. Jet fighters, cargo planes, and combat helicopters took off from the international airport in the city of Turkmenbashi for the viewing pleasure of Berdymukhamedov, who is formally supreme commander of the armed forces, despite having no known experience in military service. One of multiple highlights of the drill was an exercise in directing an armed Turkish-made Bayraktar TB2 UAV toward a target by means of the TürkmenÄlem satellite, which is operated by Turkmenistan’s National Space Agency.

“The drone aimed a missile from a height of 5,000 meters and a distance of 8,000 meters and hit a hypothetical target: a radar station,” the state news agency reported.

Phantomatic foes on the ground, in the air and on the sea were vanquished by all means possible. Smote with 120-mm mortars and vehicle-mounted and man-portable anti-aircraft missile systems, bombed by attack aircraft and combat helicopters, liquidated by crack commando teams, and blasted from the waves by the Tarantul Class corvettes Edermen and Gayratly.

Turkmen exercises like this one are most notable for mainly envisioning the prospect of conflict not with an irregular militant force, but a full-fledged army from a foreign nation. Quite which possible antagonist Ashgabat has in mind is not immediately obvious, although Russia’s repeated assaults on its neighbors, most especially Ukraine, has painfully reminded nations in the post-Soviet space that there is probably no harm in being forearmed.

Then again, is Turkmenistan uselessly splurging money on military toys that would be better spent on more pressing needs? Despite the country’s energy riches, there is recurrent evidence that cash is tight.

In an October 22 meeting dedicated to discussing public administration reforms, Finance and Economy Minister Mukhammetgeldy Serdarov talked up the savings that had been made through a recent merger of districts and villages. Fully 28 million manat (around $1.4 million at the black-market rate, $8 million at the official rate) will be freed up by means of this rearrangement, he said. Whatever the exchange rate, these figures are paltry when one considers how much money the regime spends of trifles such as giant indoor Ferris wheels, gold-leafed dog statues and the like.

This meeting, incidentally, was chaired by Gurbanguly Berdymukhamedov, the former president and father of the current incumbent, ostensibly in his capacity as chair of the upper house of parliament. Executive functions do not strictly fall within the competences of a Senate speaker, so the fact that Berdymukhamedov senior presumes to take such a front-seat role in important areas of governance only serves to highlight the extent of the curious and unspoken father-son ruling duopoly under which Turkmenistan now exists.

When Berdymukhamedov the elder turned to the subject of agriculture and how badly it is being done by the country’s feckless, wasteful and disorganized farmers, it sounded for all the world like he had never relinquished the president’s seat. And in a very real sense, he never did.

Turkmenistan is desperate for sporting glory, but this ambition continues to elude it.

In January 2018, then-President Gurbanguly Berdymukhamedov scrapped what was then the state committee for sport to create in its place a Sports and Youth Policy Ministry. The goal was presumably to elevate the status of sports in the government’s rank of priorities, but if the hope was that this bureaucratic fix might help radically upgrade the showing of Turkmenistan’s sportspeople on the international stage, it was in vain.

In the spirit of “if at first you don’t succeed, try, and try again,” the Sports and Youth Policy Ministry has now itself been abolished and replaced with a State Committee for Physical Culture and Sports. That is about as far as the changes go. Where Gulmyrat Agamyradov was once the sports minister (a job he filled since 2020), he will now oversee the sports committee.