Turkmenistan is eager to gin up some good vibes as another year of shortages and economic stagnation draws to a close. But even when wares appear in the market, the problem is finding cash. 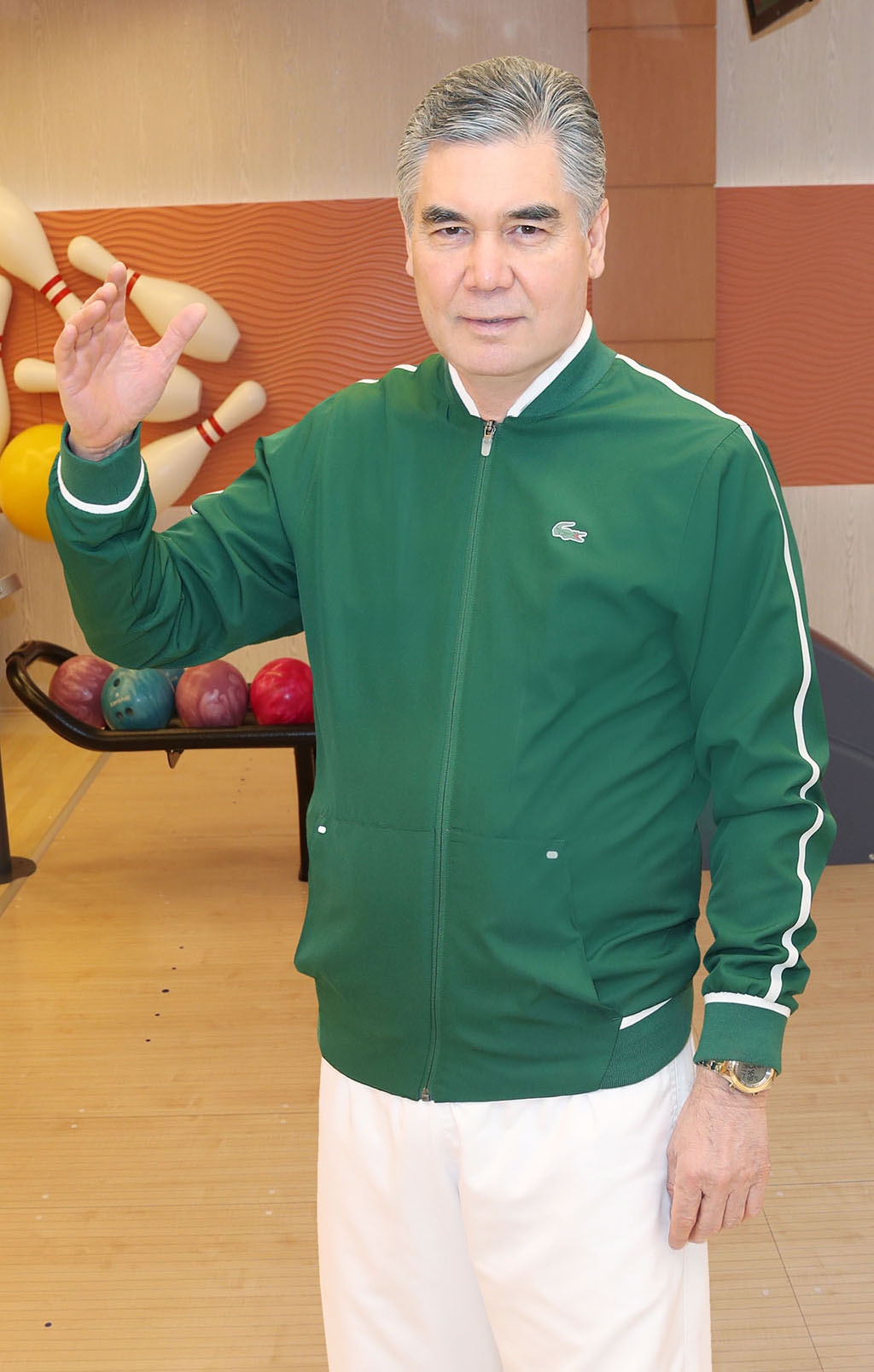 Menace to the pins (state media)

It looks like Turkmenistan does after all pay attention to its embarrassing international coverage, at least when the president’s image is at stake.

In August, President Gurbanguly Berdymukhamedov drew much mockery, notably on Comedy Central’s Daily Show, for his trip down to the bowling alley. State television coverage of this publicity stunt showed the president making several strikes in a row, but it was clear that the achievement may have been courtesy of some unsubtle editing.

Berdymukhamedov headed back to the bowling alley this week. And this time the strikes were shown in one continuous shot, demonstrating beyond all doubt that he truly is a menace to the pins.

As the end of the year approaches, the president’s publicity stunts become more numerous, and the December 15 edition of the evening news bulletin provided some choice content. In addition to the bowling, Berdymukhamedov engaged in some basketball – effortlessly scoring a shot – rode a horse, led his government in some light stretching at the gym.

The highlight of the bulletin though was the part where he was shown with his grandson Kerimguly as they worked together on remixing an earlier penned song, Karakum. The performance was shown in full, for the delectation of viewers.

The government is eager to gin up some good vibes as another year of shortages and economic stagnation draws to a close. Amsterdam-based website Turkmen.news, which has led the way in documenting food deficits, reported on December 15 that the authorities have begun flooding markets with food and other consumer goods. The wares on offer are said to be retailing at below-market price and of satisfactory quality.

The only hitch is that it is not always possible to get hold of cash. As RFE/RL reported over the summer, ATMs routinely run dry early in the day, a situation that forces people to wait for hours from dawn in the hope of getting money.

In a development reminiscent of similar efforts in nearby countries like Uzbekistan and Tajikistan, Turkmenistan is trying to fix its currency troubles by nudging people, quite hard, toward greater reliance on cashless bank card transactions. And yet, even that plan is problematic. Vienna-based Chronicles of Turkmenistan reported on December 11 that some state shops that accept card payments have experienced technical problems with their terminals. Retailers at the shops are instead demanding cash, much to the dismay of shoppers.

Turkmen.news brings different news about bank cards that suggests speculators are having a field day. Since late November, the State Bank for Foreign Economic Affairs, or Turkmenvnesheconombank, as it is better known, has begun allowing holders of Visa cards to make transactions overseas. Because of the yawning difference between the official and black-market exchange rates for the Turkmen manat – 3.5 to the dollar vs. 18-19 to the dollar – those able to cross the border have been handed ample opportunity to make a quick buck. Turkmen.news has reported on residents of the northern Dashoguz province going over to Uzbekistan in numbers, buying goods with their cards (paying at their advantageous exchange), selling the same goods for dollars, and then taking that hard currency back to Turkmenistan to sell on the black market.

Not that it is particularly straightforward to get those cards. Wise to this scheme, Turkmenvnesheconombank imposes long waiting times for applicants and then limits how much cash can be withdrawn with the cards.

It is only thanks to media in Pakistan that the world learns about the recurring hiccups with the protracted Turkmenistan-Afghanistan-Pakistan-India, or TAPI, natural gas pipeline. Karachi-based The News International reported on December 16 that Ashgabat has consented, by way of an accommodation to an increasingly fractious Pakistan, to cover the cost of insurance against non-delivery of gas provoked by unrest in Afghanistan.

Pakistan has already firmly established itself as the awkward link in this energy route, making demands for renegotiations on pricing mechanisms. Islamabad believes the fall of gas prices since the sales agreement was first inked puts it in a good position to demand a revision. In light of the trouble that Turkmenistan has run into over gas contract conditions with Russia and Iran, this kind of trouble before the project has even got off the ground does not augur well.

Undeterred by such bumps in the road, Turkmenistan continues to spend on energy infrastructure. Ashgabat-based news website Orient reported that state gas company Turkmengaz has bought pipes from Sumitomo Corporation Europe Limited as part of development work at its Galkynysh mega-field, which is estimated to hold more than 26 trillion cubic meters of gas.

In other infrastructure news, Berdymukhamedov inspected progress on works being carried out in Ashgabat by Russian company Vozrozhdenie to create a flood-mitigation system. The capital has been routinely crippled by flooding in the rainy spring season – a remarkable failure of urban planning given how thoroughly the city has been rebuilt in the past 20 years.

The surge in Italo-Turkmen amity that succeeded Berdymukhamedov’s visit to the peninsula in November shows little sign of abating. Turkmenistan’s deputy foreign minister, Vepa Hajiyev, met earlier this week with his Italian opposite party, Manlio Di Stefano, as part of an event aimed at broadening Italy’s ties with Central Asia as a whole.

The government has once again made a pledge to more robustly combat corruption, albeit in the most indirect of manners. Under a law approved by the president last week, people convicted on charges of graft will be excluded from the regular mass amnesties that see thousands let out of the nation’s prisons.

It is possible that this is for real. Then again, it is just as possible that it isn’t. Talk of corruption in Turkmenistan these days brings to mind the fate of former Interior Minister Isgender Mulikov and Meylis Nobatov, a former head of the State Migration Service, who were both recently sentenced to long prison terms for allegedly abusing their posts to accumulate vast riches. There is strong evidence that such venal behavior is the norm among well-positioned individuals in Turkmenistan, so it seems credible to think that the offense of corruption is being bandied about to target no so much officials who are greedy, but officials who are excessively greedy and, more importantly, insufficiently loyal.