Turkmenistan: Bringing out the big guns

The 30th anniversary of independence was evidently not deemed an appropriate time for future planning. All the focus was instead on the past. 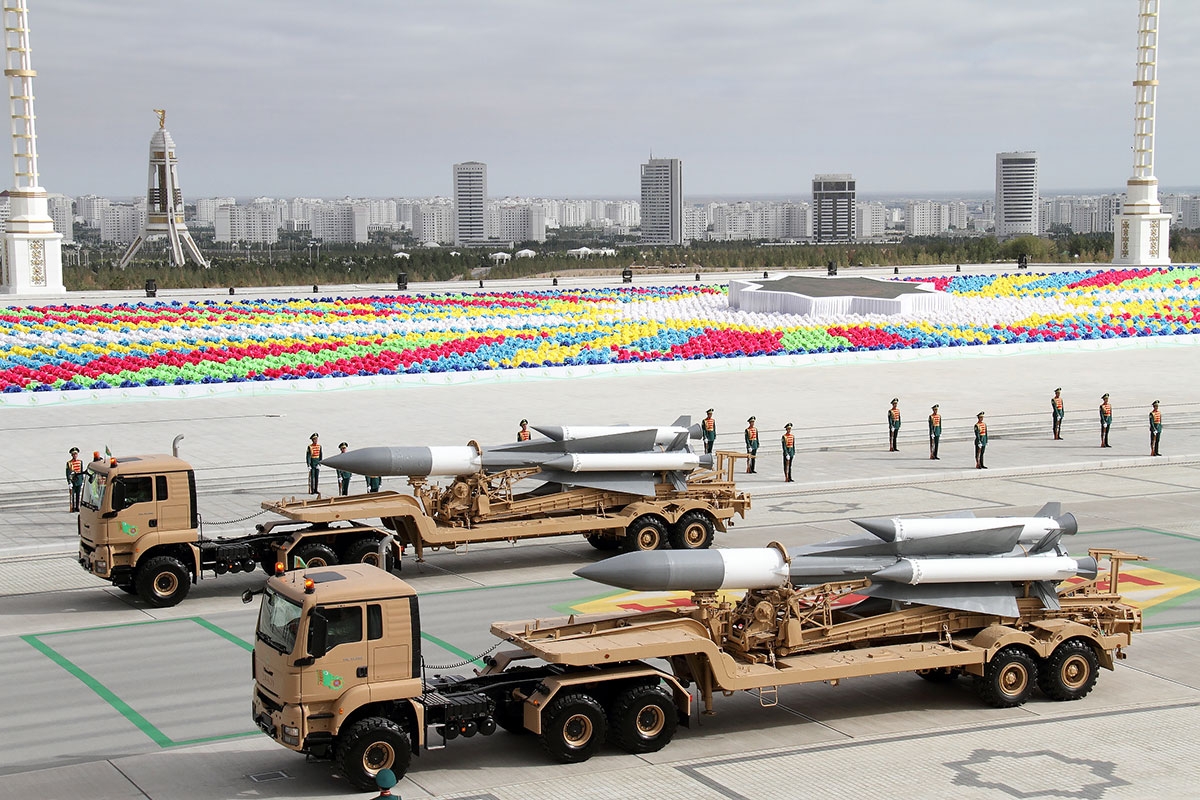 The Khalk Maslahaty, as Turkmenistan’s upper legislative chamber is known, was convened on September 25. And absolutely nothing happened.

For a change, this came as an anticlimax.

The body has only existed in its current form since late March, when a simulated election was held to pick 48 of the chamber’s 56 members. (Another eight Senators were designated by presidential decree).

Everybody from the president down insisted this institution-tinkering was implemented to better reflect the popular will, although this was clearly a falsehood, since Turkmenistan is run as a one-man dictatorship. One widely circulated notion was that the Senate would play into some tortuous transition mechanism that would see power handed from President Gurbanguly Berdymukhamedov to his son and presumed successor, Serdar.

Since Serdar earlier this month turned 40 – the age from which Turkmen citizens are legally permitted to serve as heads of state – there was much speculation that the convening of the Khalk Maslahaty, which also involved lower house members, ministers and local leaders, might present an occasion to take another step in the transition process.

The event was a bust for Turkmen elite-watchers, however. Vienna-based news website Chronicles of Turkmenistan summarized proceedings pithily: “In his speech, Berdymukhamedov made no important announcements and revealed no heretofore unknown information, limiting himself only to listing the country’s achievements.” TV footage of the speech repeatedly cut away to shots of the hall, in which hundreds of listeners were simultaneously jotting down what must have been identical notes.

The 30th anniversary of independence that has been celebrated over the past week was evidently not deemed an appropriate time for future planning. All the focus was instead on the past.

Berdymukhamedov accordingly informed the Khalk Maslahaty that he has just finished yet another book, this time under the title: “Independence – Our Happiness.”

“This word [independence] carries within itself great meaning and contains the dreams and aspirations of valiant ancestors of a free and happy life,” he said.

There were some crumbs of generosity dispensed to mark this season of celebrations. More than 2,500 people were, for example, granted Turkmen passports, finally ending their status as stateless citizens. The recipients of the documents were members of 20 different ethnic groups who have for decades lived in the country without enjoying fundamental rights.

Fundamental rights are a relative matter, of course. Many Turkmen citizens stranded abroad because of COVID-19-related travel restrictions are in a very peculiar predicament. As Amsterdam-based Turkmen.news has reported, Turkmen consulates have met holders of expired passports – which can only usually be reissued inside Turkmenistan – halfway since August 2020 by pasting a note inside the passport extending the validity of the document to the end of 2022. As Turkmen.news noted on September 23, however, passports thus amended are not recognized by third countries. This means that many Turkmen nationals currently in Russia, for example, are unable to get visas to European Union nations, essentially leaving them unable to get out of Russia or return home. 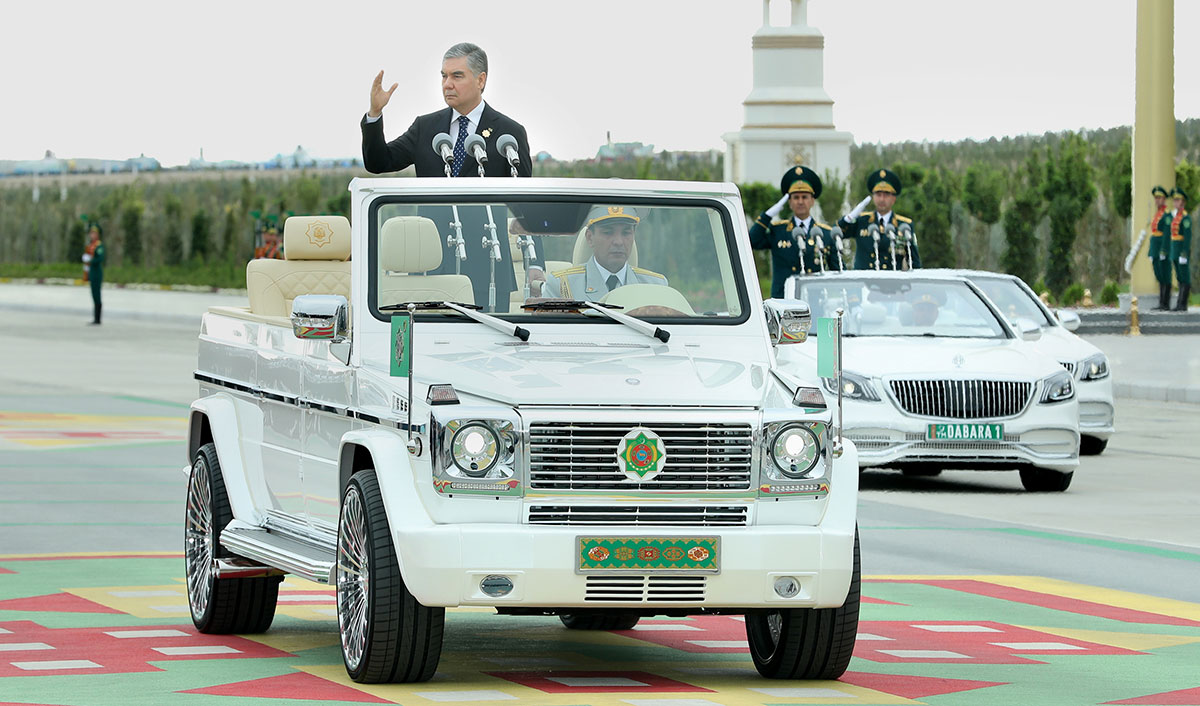 The damp squib of the Khalk Maslahaty was in any case just an insipid foretaste of what was to come. The main event to be marked this week was Independence Day. The date was commemorated in decidedly martial fashion on September 27. Berdymukhamedov arrived standing on the back of a roofless vehicle flanked by lines of cavalrymen in traditional tribal garb. That was followed by a military parade showcasing seemingly every item of military firepower Turkmenistan has in its possession – from armored vehicles, attack helicopters, fighter jets, and missiles. Images of naval craft plying the Caspian were shown on a jumbo screen. The unsubtle messaging was that Turkmenistan has the means to assert its independence.

One piece of kit getting its maiden airing in public was the Turkish-made Bayraktar TB2 unmanned combat aerial vehicle, or UAV. This model was reportedly used to great effect by Azerbaijan’s armed forces during last year’s war with Armenia. 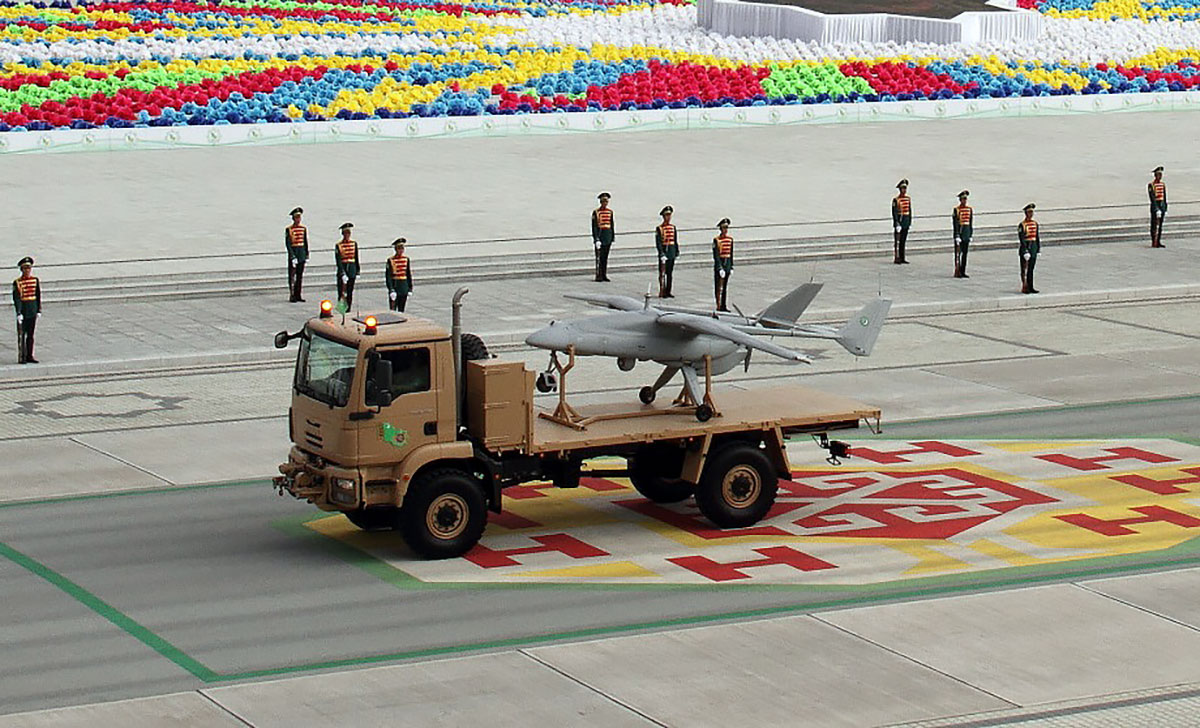 After the parade, Berdymukhamedov descended from the spectator’s stage to mount a horse for a gentle canter. This bit of theatrics felt particularly pointed against the backdrop of a renewed round of rumors of the president again recently falling prey to physical infirmity.

Such is the regularity with which this exact strain of gossip resurfaces that it is difficult to shake the suspicion that it is only circulated in the first place to give the regime the opportunity to refute it. On this instance, it was an obscure Canada-based YouTube channel with 3,500 subscribers that first made the claim Berdymukhamedov had fallen into a coma. And yet, despite the channel’s nonexistent clout, the Foreign Ministry felt compelled to issue a statement of denial via the embassy in Moscow. With Berdymukhamedov’s horse ride, the circle was completed, and all suspicions possibly harbored by the population at large could be put to rest.

One oft-disbelieved claim that the government wishes, meanwhile, that the world would believe is that it is definitively embarked on construction of the trans-Afghan TAPI natural gas pipeline. Other than the uncertain fate of Afghanistan’s stability, the project is impeded only by the small matter of financing. Cost estimates put the price of building the pipeline in the $10 billion ballpark. Turkmenistan has displayed neither capability nor willingness to foot the bill itself.

So the remarks made to the Neutral Turkmenistan newspaper last week by the recently appointed Saudi ambassador to Ashgabat, Said Osman Ahmed Suweid, will have made welcome reading. Saudi Arabia, the ambassador said in an interview published on September 23, intends to “cooperate” and “support” in the competition of TAPI. He did not specify if he meant that backing would also arrive in monetary form, but that is certainly what the Turkmens will be hoping for.

Although the week will have been disappointing for fans of succession talk, this contingent was given one slim slice of consolation. On September 23, Neutral Turkmenistan published a lengthy tract on Turkmenistan’s economic model by none other than Serdar Berdymukhamedov. The article was written in the manner of a particularly uninspired Turkmen Economics 101 college sophomore, but it was exceptional for semaphoring that Berdymukhamedov junior is poised to take nominal charge of the country’s economic affairs.

When it will be Serdar’s time to take over everything else remains a mystery.