Turkmenistan: But where are the buyers?

Turkmenistan struggles to operate its synthetic gasoline plant, chokes off imports from Iran, and demands the elderly wait in long lines to prove they’re not dead. This and more in our weekly Turkmenistan briefing. 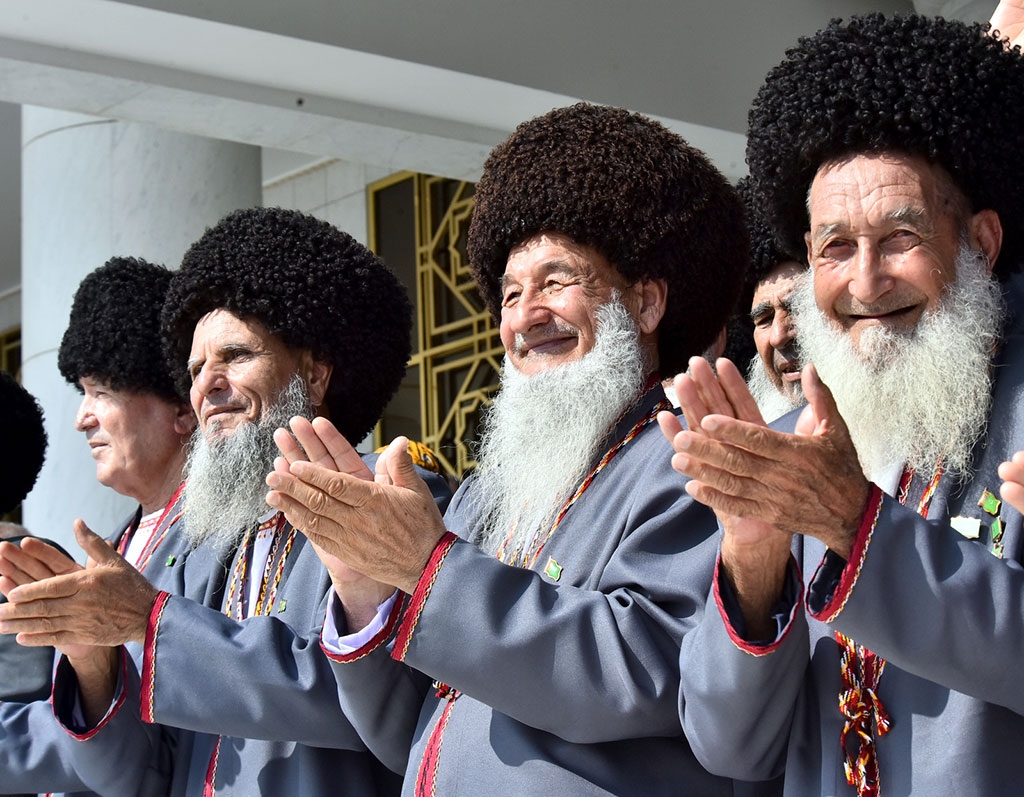 Not dead yet (state media)

Turkmenistan last June cut the ribbon on a $1.7 billion state-of-the-art facility that would enable it to convert natural gas into gasoline in the expectation this would help diversify its exports and bring in much-needed cash. The only problem is that they appear not to know how to use it.

Last week, approval was requested from the president for state-owned Turkmengaz to conclude a plant management consultancy deal with Japan’s Kawasaki, which built the facility in the first place, together with Ankara-based Renaissance Construction.

The government touts the complex in Ovadan-Depe, just outside the capital, Ashgabat, as proof of its commitment to clean and sustainable environmental practices. The plant is designed with the capacity for converting 1.8 billion cubic meters of natural gas into 600,000 tons of EURO-5 equivalent automobile fuel every year.

It is not yet evident, however, who is coming forward to buy Turkmenistan’s gasoline product.

As the Ashgabat-based news website Business Turkmenistan reported earlier this month, citing data from the state statistics agency, 48,000 tons of the synthetic gasoline has so far been exported to foreign markets, a figure that suggests the Kawasaki-built facility has got off to a slow start.

When the plant was inaugurated, state media named Bulgaria, Greece and Romania as prospective customers. But the long-term viability of those markets looks in doubt in view of tightening EU regulations on emissions suggesting an imminent transition to cleaner EURO-6 gasoline.

And there is not exactly much local demand. As Vienna-based Chronicles of Turkmenistan has pointed out, while the conventional and only slightly inferior fuel costs 1.35 manat per liter, the synthetic fuel sells at 2 manat.

Turkmen consumers are already looking down the barrel of price rises elsewhere, courtesy of ongoing tensions around neighboring Iran. Notwithstanding some recent professions of fraternal solidarity, Turkmenistan has for several weeks kept its border with Iran firmly shut.

Chronicles reported on January 16 that the closure has led to the disappearance of items like Iranian cigarettes, Coca-Cola and Pepsi Cola from store shelves. Local analogues for those soda drinks do exist, but the imported options are preferred. As for the cigarettes, state stores are allowed to sell no more than two packs per customer, making the Iranian alternative a good option for hardened smokers.

The concern now is that if the border remains closed for much longer, the types of groceries coming in from Iran – and Chronicles describes them as being plentiful – will go up in cost.

In a related development, opposition-run website Gundogar has cited government sources as saying that the state carrier Turkmenistan Airlines may extend its decision to refrain from flights over Iran to February 20. This means it will not service routes to Abu Dhabi and Dubai. Gundogar speculates this is being done to further limit the number of Turkmen citizens leaving the country.

Some mild relief came from Switzerland, albeit probably not in the form that the government would have preferred. Authorities there announced they would be returning $1.3 million worth of funds confiscated as part of an anti-corruption investigation to Turkmenistan. Justifiably distrusting of the grasping regime, Bern is channeling the funds into a United Nations Development Program, or UNDP, initiative to combat tuberculosis in the country.

The Swiss Foreign Ministry refrained from dwelling on the particulars of the specific act of corruption that precipitated this gesture. Turkmenistan is no stranger to exploiting contract-hungry Europeans.

A court in Germany in December began hearing the case of a former top manager at German truck-maker MAN who was accused of giving kickbacks to Turkmen oil officials. The corruption in question dated back to the rule of the late Turkmen leader Saparmurat Niyazov.

Things are so much easier at home.

Only days after President Gurbanguly Berdymukhamedov was talking about the need to make quick progress building a new overpass at the intersection of Ashgabat’s Saparmurat Niyazov Avenue and Atamyrat Niyazov Avenue – roads named after the late president and his father, respectively – work has already started. Ashgabat-based Gundogar-News (not to be confused with the aforementioned opposition-run outlet) says the intersection was needed because of the increase of vehicles in the city.

This does not jibe with the impressions of foreign visitors struck by the emptiness of Ashgabat’s outsized thoroughfares. It is just as probable that the determination to award this lucrative contract was motivated by the fact that the company doing the construction is controlled by one Annanazar Rejepov, Berdymukhamedov’s brother-in-law.

Amsterdam-based Turkmen.news has since December been reporting on the alarming situation in many of the country’s maternity wards. Reports of high mortality rates at a decade-old maternal and child healthcare clinic in the city of Dashoguz has prompted many women to seek treatment at an even older facility, despite the deeply unsanitary conditions to be found there.

Since Turkmen.news published its exposé last month, it has received similar reports from readers in Ashgabat and Mary. The Ene Mahri perinatal center in Ashgabat has allegedly only kept its child mortality figures down by refusing to treat women deemed to be experiencing problematic pregnancies. A UNICEF report on childcare in Turkmenistan from 2014 cited “the management of complicated pregnancies and care of low birth weight children” among Ene Mahri’s specializations, which is to say that this is the very place where those in-need patients should be treated.

As for those who have survived into old age, they are being required to wait hours in long lines at the government social welfare offices to prove that they are not yet dead. A correspondent for RFE/RL’s Turkmen service, Radio Azatlyk, explains that pensioners are only some of the benefit recipients required to check in with the government biannually to continue receiving their payments.

Given quite how much sun shines on Turkmenistan, disappointingly little has been done to harness the potential of solar energy. The UNDP is, in conjunction with the State Committee on Water Management, going a small way toward addressing that by installing solar power systems at three remote locations in the heart of the Karakum Desert. This test initiative is tiny, but it could show the way in helping rural communities across Turkmenistan reduce their reliance on diesel-powered generators to purify the rainwater and condensation they use for their livestock.