The president has made a major concession to reality by acknowledging he is aging. As for the rest, business as usual. 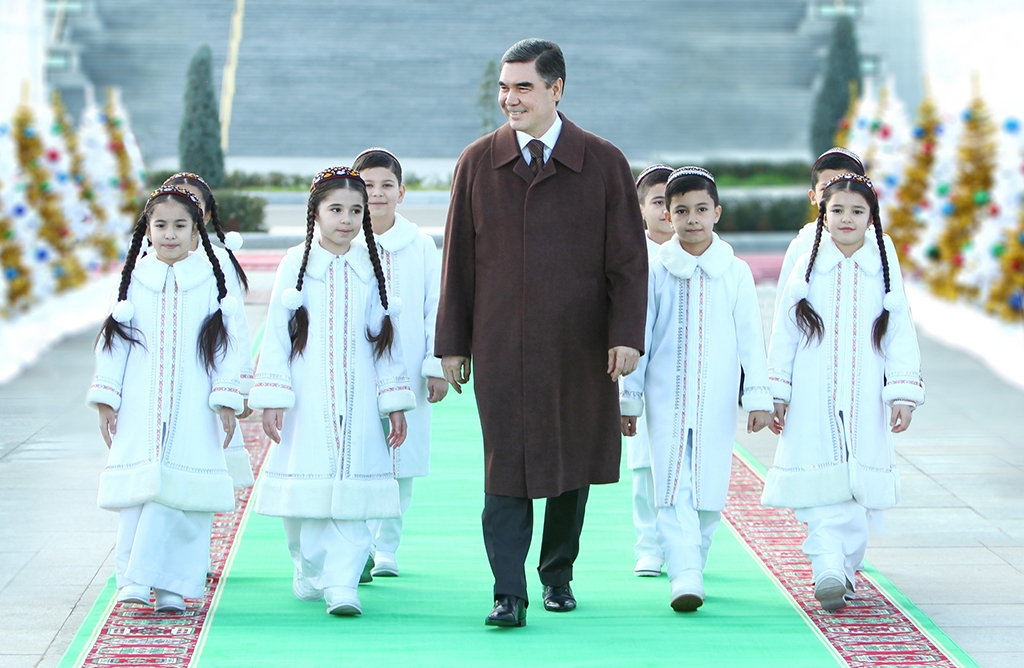 To open the new year, schools in Turkmenistan removed portraits of the president from their walls. Nothing dramatic. Updated images of a more gray, more wistfully Solomonic leader immediately went up in their place.

This is what passes for change in Turkmenistan. It made international headlines in August when Gurbanguly Berdymukhamedov, who turns 62 this year, was seen in public with flecks of silver in his theretofore inky black mop. For a leader obsessed with his own physical condition, this concession to the passage of time appeared like a tacit nod to the thorny matter of succession.

In the dynastic order of things, a clear candidate is being lined up. On January 2, the government website carried a perfunctory item conveying the news that one Serdar Berdymukhamedov would be taking up a new job as deputy governor of Ahal province. This 37-year-old, who has already forged a remarkable career in parliament and is now leaving a post as deputy foreign minister, is none other than President Berdymukhamedov’s one and only son.

This position is transparently a dry run for a greater role in some unspecified future. Ahal province surrounds but does not include the capital, Ashgabat. Deputy governorship implies a secondary role, but it will spare Berdymukhamedov junior the blushes if anything goes awry.

His time as deputy foreign minister was certainly productive, if only on paper. He effectively deputized for his father at a Central Asian head of states summit last March before leading delegations on diplomatic blitzes in Vienna and later to the offices of the United Nations in Geneva and New York.

The Ahal job will be busy too and offer no end of photo-ops. In October, President Berdymukhamedov announced plans to build a new city from scratch in the province's Gokdepe district.

Appointing a likely dauphin to a top post in the Ahal province is of a piece in Berdymukhamedov’s elite management style. In her 2016 report for Chatham House, Annette Bohr observed how this represented a break from the approach favored by President Saparmurat Niyazov, who died in 2006.

“The appointment of relatives and persons from [Berdymukhamedov’s] home region in the Western Ahal province to senior posts has been notable, in sharp contrast to [Niyazov’s] avoidance of kinship or regional-based networks,” Bohr wrote. “Complaints have been voiced unofficially that Berdymukhamedov considers only those [members of his] Ahalteke [clan] living between the cities of Kaka and Baharly in the Ahal region to be ‘genuine’ Turkmen.”

There need be no hurry about pushing through the succession process, however. As recently as February, Berdymukhamedov secured a third seven-year term with more than 97 percent of votes. Constitutional changes adopted in 2016 mean he can keep running for office indefinitely.

This official theme for 2019 is “Turkmenistan: Motherland of Prosperity,” so state television has duly upped the volume of broadcasts of lingering shots of all manner of locally produced food. Import-substitution is a matter of economic creed for the Turkmen government. During the first Cabinet meeting of the year, it was stated that food imports last year declined by 27.5 percent. And that is a good thing, argues the government.

Media run by exiled Turkmens tell another story. A photo published by the Chronicles of Turkmenistan shows what it said was a line of people waiting to buy eggs in Ashgabat. Even before dawn breaks, dozens of people can reportedly be seen forming queues outside stores. Only the bold dare to take such pictures since police officers are as a matter of course sent to check that nobody is capturing potentially seditious images.

The collapse in imports has also extended to medicinal supplies. The Chronicles of Turkmenistan calculated that the average price of drugs had risen by almost 50 percent in 2018.

There are some nominally non-state media outlets inside Turkmenistan, but they too fulfill the almost exclusive function of cheerleading. One such website, Orient, reported approvingly on January 3 that prices for high-speed internet have collapsed several times over in the past six years or so. This is true, up to a point, but as RFE/RL’s Turkmen service, documented in an article published the same day, access to independent media is heavily restricted and users typically find the that the speed of their connections is often far below what is advertised.

In the broader scheme of things, the telecommunications scene in Turkmenistan is getting only more grim. Sources close to Russian mobile telecommunications company MTS revealed to Eurasianet that it had, as of December, begun dismantling its transmission equipment in Turkmenistan. The decision followed a standoff that the Russian company claims was the culmination of years of attempts by the Turkmen government to coerce them into unreasonable profit-sharing arrangements. This now effectively cements state-controlled Altyn Asyr’s monopolistic position on the domestic market.

Berdymukhamedov has tried to bill Turkmenistan a desirable destination for investors in the telecommunications sector. At an industry conference in Ashgabat in October, the president pronounced that his country was “always ready for mutually advantageous cooperation with all states interested in the development of transnational communications systems.” Such sententious utterances are skimpy on the details, but Berdymukhamedov seems to be trying to tempt some telecommunications giant to lay internet cables, or some such, across Turkmenistan. How anyone studying the MTS saga might imagine this would be a worthwhile gamble is anybody’s guess.

The truth is that willful obviousness is de rigueur in Turkmenistan.

What to make of the David Lynch-style spectacle of the president’s grandson (the son of Serdar) staging a jaw-droppingly inept song-and-dance performance to a ballroom of clearly bemused children? Kerimguly, a lumbering 16-year-old, is particularly fond of singing in English, as he did memorably during a pre-New Year gala duet with his grandfather. This time, he again picked up his beloved keytar to render Justin Timberlake’s 2016 hit Can’t Stop the Feeling. State television cruelly broadcast the amateurish routine in its unending entirety and made no effort to distract viewers from the fact that Kerimguly’s audience was obviously rather nonplussed by the whole business.