Turkmenistan needs food staples and energy-rich Kazakhstan is, surprisingly, short of gas. The mechanics of a deal and more in our weekly briefing. 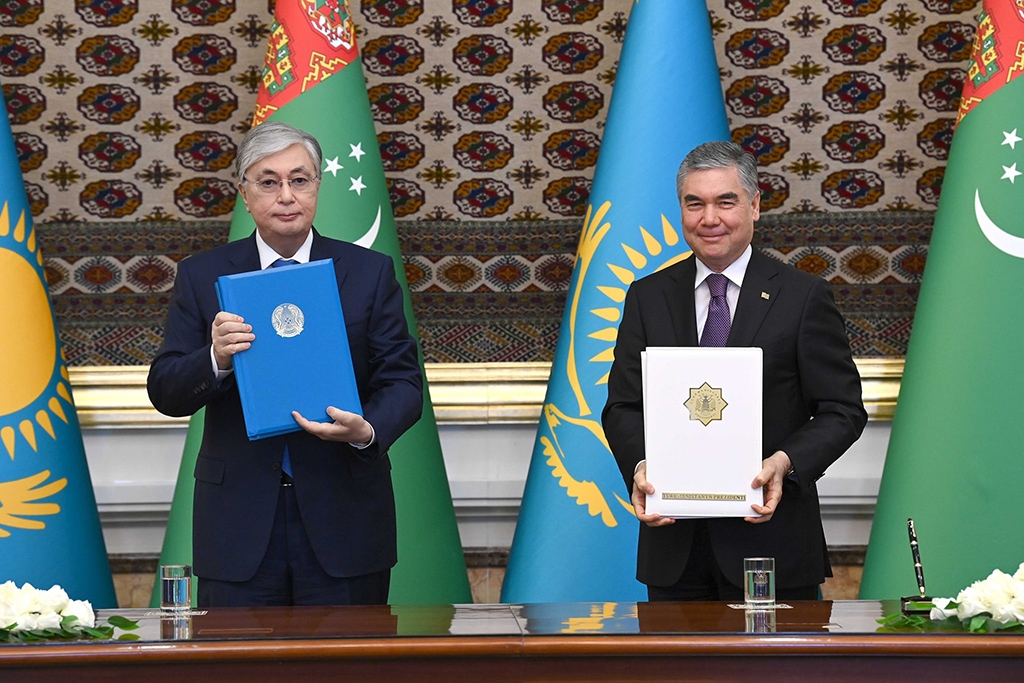 Having a gas (Kazakh presidential administration)

Turkmenistan’s regional diplomacy kept up its latterly sustained tempo this week with the visit of Kazakhstan’s President Kassym-Jomart Tokayev.

In what is becoming a recurrent theme, much energy was invested during the October 24-25 talks on the idea of boosting trade.

“We agreed to adopt a package of measures aimed at a significant increase in the volume of mutual trade. The governments have been instructed to use the existing export potential of both countries to expand the range of [traded] goods,” Tokayev said at a press briefing – not a very common format in Turkmenistan for these kinds of visits, incidentally – with his opposite party, Gurbanguly Berdymukhamedov.

A strikingly pragmatic aspect to Turkmenistan’s recent neighborly overtures is that they have directly addressed long-term irritants in relations. Namely, border delimitation. When Berdymukhamedov visited Uzbekistan earlier in the month, a joint statement expressly addressed the ongoing efforts of a Turkmen-Uzbek intergovernmental commission on border demarcation, describing this as an exercise in preserving warm ties. A following point in the same document talked about the need to coordinate on the use of rivers and water resources.

Tokayev’s visit produced even firmer outcomes on similar issues. As the Turkmen state news agency described the scene, there was applause in the room when the two presidents signed a treaty on delimitation of the state border and fishing areas in the Caspian Sea.

What is it that these countries intend to trade? Going by Nur-Sultan’s statements, the planned traffic looks notably one way for the time being. Tokayev spoke about Kazakhstan wanting to increase the supply of metallurgical, petrochemical, food and pharmaceutical industry products, as well as basic agricultural staples like flour and wheat – the last items would be provided on what the Kazakh leader described as “mutually beneficial terms.” This is no small matter given how Turkmenistan has in recent years experienced chronic shortages of basic food items like flour.

Kazakhstan is prepared, in return, to “significantly increase imports of Turkmen [natural] gas.” This might appear a curious proposition for a country with no shortage of its own energy resources, but Kazakhstan has in fact this year experienced acute difficulties in keeping its motorists supplied with liquified gas.

Another intriguing tentative agreement coming out of the visit was on the future construction of a telecommunications cable between the two countries. The cable would be laid down along the Caspian-adjacent slice of land where the two countries touch and would, according to Almaty-based telecommunications company Jusan Mobile, which is one of the signatories to the provisional agreement, be used to ferry online traffic to countries like Iran and Afghanistan. An undertaking like this would require the deployment of not inconsiderable financial and diplomatic resources. Jusan Mobile is, by the by, the new branding for a company formerly known as KazTransCom, one of whose reported ultimate beneficiaries once included the current head of Kazakhstan’s security services, Karim Masimov.

Tokayev even came away from his stay with gifts. Specifically, an Akhal-Teke horse and a dog. “I will personally check on his state of health and visit him,” Tokayev assured Berdymukhamedov of the nervous, fidgety horse as it was presented to him.

Dialogue with another partner, Turkey, is producing results of a different kind, but ones similarly pleasing to Ashgabat. Moscow-based rights group Memorial on October 25 reported on the detention of yet another Turkmen activist by Turkish authorities over the past few weeks, purportedly on grounds of violating migration rules.

According to Memorial, Bayram Allaliyev was on October 21 summoned by migration authorities in Istanbul to come to their offices to apply for permanent residency, but was then detained and processed for deportation. Other Turkey-based individuals facing similar treatment include Dursoltan Taganova and Akhmed Rakhmanov. Turkmenistan reportedly has a list of 28 people it wants to see receiving the same treatment.

Memorial has linked this increased pressure on Turkmen activists to an upcoming Turkic Council summit scheduled to take place in Istanbul on November 12.

Turkmenistan is fully aware that it can pursue such repressive policies with impunity, because even the purported values-based European Union can barely muster a word about Ashgabat’s excesses. In its statement on the latest EU-Turkmenistan joint committee meeting held on October 21, Brussels shoved all talk of human rights down to the bottom, noting in only the vaguest terms that “progress in human rights is of key importance for EU-Turkmenistan relations.”

Russia’s hardball gas strategy with Europe, significantly enabled by the completion of the Nord Stream 2 pipeline project, is lending more urgency to European explorations of alternatives. Turkmenistan is only too pleased to try and oblige in papering over gas shortfalls, although it does not appear to want to foot the bill for any major energy transportation infrastructure.

The cravenness of EU positions on Turkmenistan extend even to environmental matters. Its statement feebly “encouraged Turkmenistan to join the Global Methane Pledge initiative launched in September 2021” as part of a “collective goal of reducing global methane emissions by at least 30 percent by 2030.”

But as Bloomberg reported in a detailed and absorbing piece on October 19, Turkmenistan is not just failing to reduce methane emissions – it has become one of the world’s worst emitters of the gas. As the news agency noted, “of the 50 most severe methane releases at onshore oil and gas operations analyzed since 2019 by monitoring firm Kayrros SAS, Turkmenistan accounted for 31 of them.” Two unnamed industry insiders cited by Bloomberg observed that “environmental standards are routinely disregarded” in Turkmenistan and that there is “no incentive for officials to try to clean up their facilities.” Timid suggestions from Brussels are unlikely to change that.

Back on the home front, Berdymukhamedov has once more resorted to dipping into the Stabilization Fund, a pot of cash created in 2008 with the specific brief of “helping avoid the negative economic impact of global economic and financial crises.” The resolution on releasing this unspecified volume of money was drafted by Berdymukhamedov’s son and presumed successor, the deputy prime minister Serdar Berdymukhamedov. A spending splurge on “new industries, investment projects and trade contracts” may be what is needed to improve moods, especially if Serdar has ambitions for a soft landing once he gets the nod.