But the end of onerous debt-servicing duties will not spell an imminent transformation in fortunes. 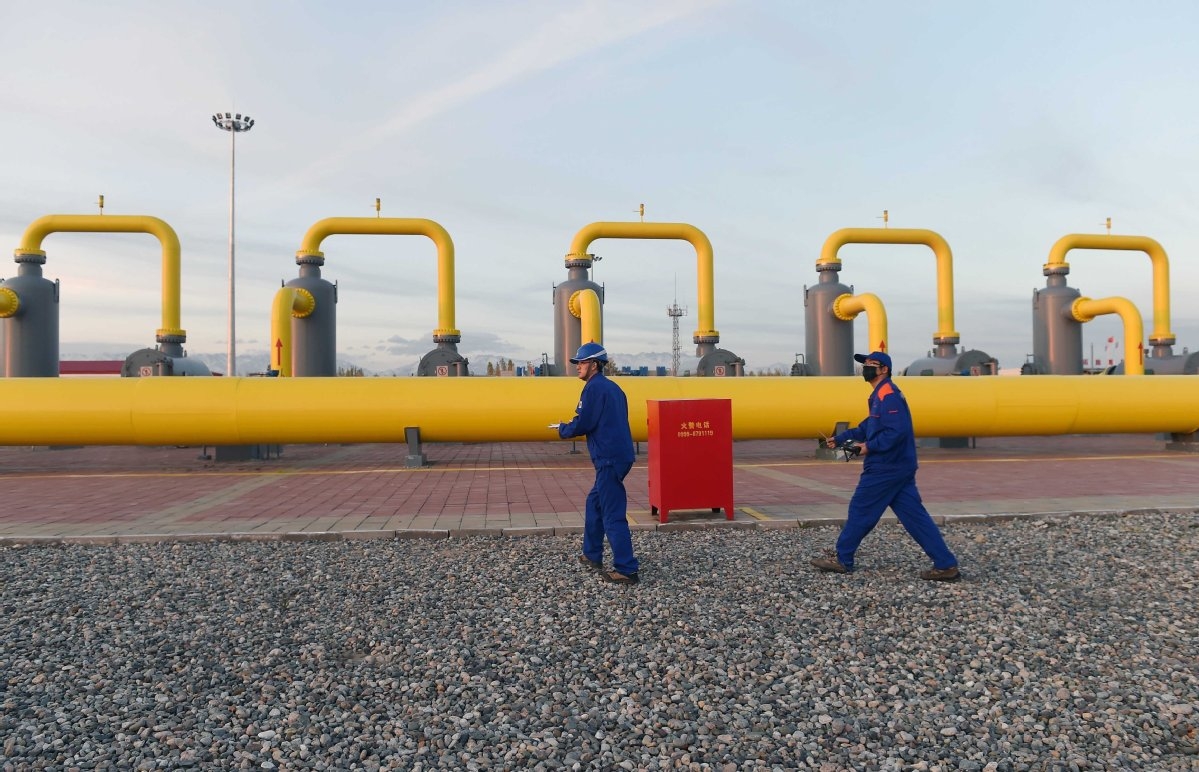 Out of debt, out of danger. That’s the idea at least.

As Deputy Prime Minister Shakhym Abdrakhmanov said at a government teleconference call on June 11, Turkmenistan has now fully repaid the Chinese credit it took out to finance its part in building the Turkmenistan-China gas pipeline and development of its cornerstone Galkynysh gas field.

News of this milestone, which is said to have been attained on June 8, was delivered to Ashgabat by the Xinjiang branch of the state-run China Development Bank, said Abdrakhmanov, who has been handling the oil and gas industry portfolio since February.

President Gurbanguly Berdymukhamedov has claimed this turn of events as a vindication of his policies.

“Full and timely repayment of foreign credit shows that Turkmenistan is an economically powerful state that pursues a responsible approach to fulfilling its obligations,” he said during the televised meeting.

As is typical, no figures were made public, although state media have bandied around the figure of $8 billion being needed to fund the aforementioned pipeline, development of Galkynysh and other projects related to exporting gas to China. Some scholars have calculated that the debt may have been closer to $10 billion.

In the absence of reliable data, however, boasts about economic muscle based on execution of narrow dependence-mitigation strategies are just words.

As has now become customary, the World Bank does not bother featuring Turkmenistan in its flagship, biannual Global Economic Prospects survey. As the survey published this month states, “due to lack of reliable data of adequate quality, the World Bank is currently not publishing economic output, income, or growth data for Turkmenistan.” Venezuela is the only other country to receive this treatment.

One is that Turkmenistan remains hazardously reliant not just on gas exports, but specifically on sales of the commodity to one particular customer: China.

If hydrocarbons accounted for 83.8 percent of exports in the last three years of rule by President Saparmurat Niyazov, who died in 2006, that figure reached 94.6 percent in 2014. That is the last year that the International Monetary Fund published the relevant data.

Crude Accountability devotes an entire chapter to exploring the intensely nebulous informal networks that control Turkmenistan’s riches. The two clan-families that have to date run the country have, according to the report, made ample use of the corruption-enabling infrastructure of offshore vehicles to stash away ill-gotten gains. Not to speak of the waste.

“Turkmenistan is a model kleptocracy, where state revenues are embezzled and billions of dollars wasted by President Berdymukhamedov on vanity projects,” the report notes.

Which is to say that the disappearance of onerous debt-servicing duties may not automatically spell an imminent transformation in fortunes.

A more technical argument was made in a recent paper by three Polish scholars – Natalia Iwaszczuk, Jacek Wolak and Aleksander Iwaszczuk – that attempts to explore the correlation in Turkmenistan between foreign direct investment, or FDI, inflows and economic growth. What the data show is that Turkmenistan performs reasonably on FDI. Among post-Soviet countries (EU members Lithuania, Latvia, and Estonia excluded), Turkmenistan ranked fifth for inflows in 2019 with $2.2 billion. (The trend has been on the decline, though).

What the scholars find, however, is that standard notions about FDI contributing to economic growth are “not confirmed.”

“Policymakers should take steps to create conditions for greater diversification of the inflows of FDI […] by improving human resources, conducting a transparent economic policy and introducing incentives for investment supporting sectors of the economy not related to gas exports,” they conclude.

Turkmenistan is arguably failing on most of those counts, and the targeted investment it is directing at non-gas sectors is being done in questionable fashion.

But the Turkmen economic model does have some boosters.

Russia’s ambassador in Ashgabat, Alexander Blokhin, this week glowed about how economic indicators demonstrate how both his own country and Turkmenistan are supposedly enduring the coronavirus pandemic passably well. (Russia is now entering its third wave of mass infections and Turkmenistan lies by claiming it has had no cases at all).

“I would say that Turkmenistan has, notwithstanding some negative assessments in foreign media, managed to weather this period very respectably, because the main areas of Turkmenistan’s economy have suffered minimally. And here we have Russian companies like Tatneft and Gazprom, champions of the petrochemical industry, working at full capacity,” he was cited as saying by RIA Novosti.

Blokhin did not go so far as to validate Turkmen claims of the economy having grown by 5.9 percent in 2020. Instead, he spoke about how non-natural gas-related trade between Russia and Turkmenistan had expanded by 40 percent last year to reach $970 million. Factoring in gas sales to Gazprom, the figure reaches $2 billion, he said.

For anybody keeping count, a crude calculation based on the 5.5 billion cubic meters of annual gas purchases made by Gazprom implies that the price of Turkmen gas for Russia is $187 per 1,000 cubic meters. That happens to be exactly what China reportedly pays Turkmenistan for gas.

At the same briefing, Blokhin spoke in complimentary terms about how Turkmenistan and Azerbaijan had come to an agreement to jointly develop the Dostluk oil and gas field in the Caspian Sea. Russia’s Lukoil is in pole position to become the operator of the project. But Blokhin sought to cast cold water on any notion that joint work on this offshore block could, as has been widely speculated, lay the ground for construction of the Trans-Caspian Gas Pipeline.

“To begin with, Dostluk is not a gas field, but an oilfield, and one with quite serious oil reserves. There is some associated gas there, as usual, but not enough that we can talk [about gas pipelines],” he said.

Moscow’s charm offensive, very much executed with one eye on the future, is becoming ever more intense. On June 12, the Russian Embassy in Ashgabat celebrated Russia Day, a national holiday, and invited Berdymukhamedov’s son and presumptive heir to the throne, Serdar, to attend as the guest of honor. 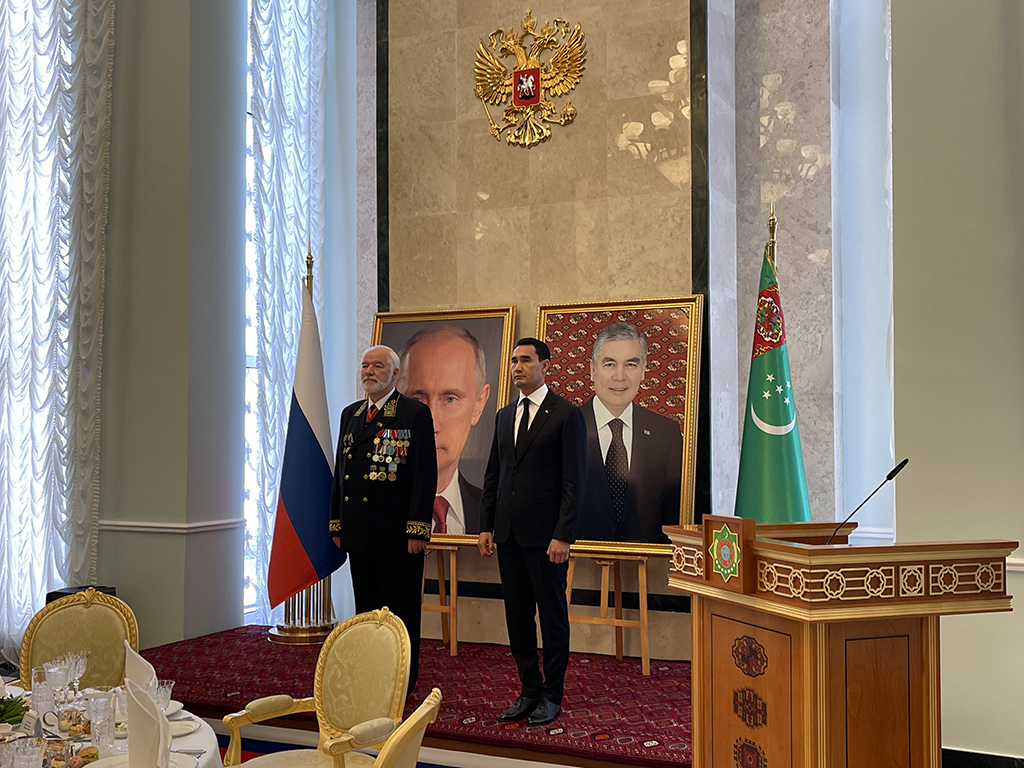 Cabinet pronouncements and ambassadorial functions, needless to say, have little bearing on how real life is being endured. RFE/RL’s Turkmenistan service, Radio Azatlyk, reported on June 14 that the dollar has lost some of its value against the manat on the black market – partially reversing a trend that has been enduring since November – but that food prices remain high.

A kilo of meat, for example, costs 65 manat (almost $2 at unofficial rates) and five liters of vegetable oil sells at 250 manat, the broadcaster’s correspondent reported. Radio Azatlyk estimates monthly salaries at around 1,250 manat.

Getting a hold of money itself is a challenge. ATMs often do not work and the retail outlets that have card payment terminals either report their machine to be out of order or, in a better-case scenario, charge a 10 percent commission, Azatlyk reported.

The coffers could be in for healthier times, should those Chinese credit payment accounts be accurate, but people’s pockets are as empty as usual.