Turkmenistan: Closing the gates of hell 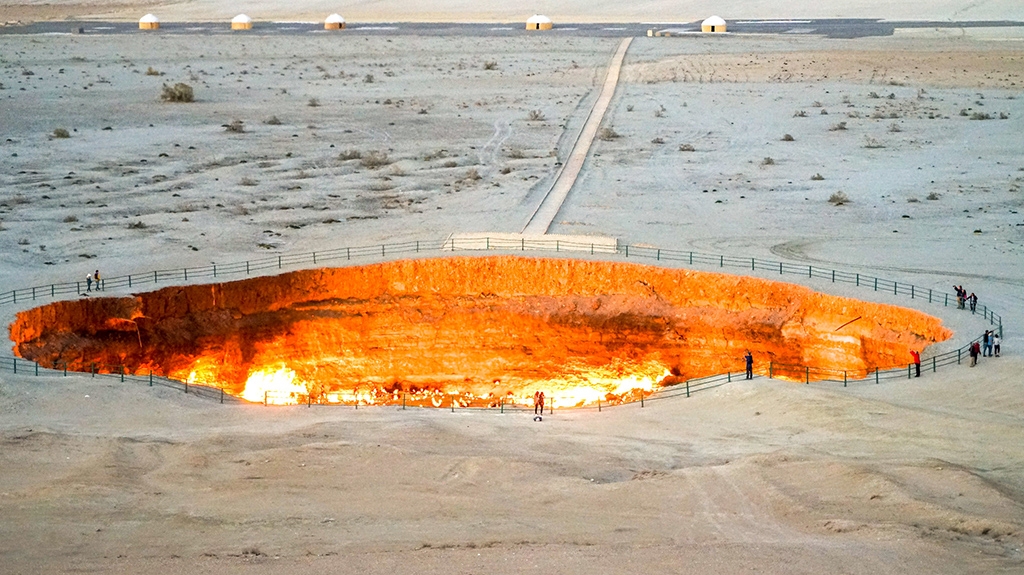 Burning for more than half a century. Can it be closed? (Kalpak Travel/Flickr/CC)

There is fresh talk that the succession process may be back on the agenda in Turkmenistan.

In an unexpected development, President Gurbanguly Berdymukhamedov announced during a Cabinet meeting on January 7 that he was convening an extraordinary session of the Khalk Maslahaty (People’s Council), the senatorial upper chamber of the legislature, to be held in early February.

The main item for discussion is a 30-year national development plan. Such roadmaps are ten a penny in Turkmenistan, but its projected end date cannot but concentrate thoughts on life after Berdymukhamedov.

As it happens, one of the point-people charged with coordinating preparations for the session is Berdymukhamedov’s 40-year-old son, Serdar, the deputy prime minister with the portfolio for economic affairs and presumed heir to the throne. The other coordinators are token figures, Gulshat Mammedova, the chair of the lower house, the Mejlis, and Kasymguly Babayev, the deputy chair of the Khalk Maslahaty.

“We bear great responsibility for the fate of our state and the future of our descendants,” Berdymukhamedov said.

It is distinctly possible that the Turkmen elite was spooked by the chaos that gripped Kazakhstan last week. As details begin to emerge of events there, it appears clear that a hazy transition process in a nation ruled by crony kleptocrats – a description that could arguably be applied to Turkmenistan – is a recipe for trouble, so it is best to get ahead of things.

As is customary during such major world events, Turkmenistan barely paid any notice to events across the border. Berdymukhamedov on January 10 sent a note of condolence to his Kazakh counterpart for the fatalities incurred during the disturbances, but he signally omitted to dwell on any particulars and referred simply to “tragic events.”

The Foreign Ministry was a little more explicit. On January 6, the ministry noted that it was watching events in Kazakhstan with concern and expressed confidence that the authorities in Nur-Sultan would manage to handle all “the constitutional and legal issues that have arisen in conformity with international norms and laws.” That is a curious way to describe what was at that very moment, at least according to official chronicles, unfolding as violent clashes between government forces and armed mobs.

There has been happier news to the south, in Iran, which Berdymukhamedov is reportedly set to visit in the near future. Serdar Berdymukhamedov was in Tehran on January 9, seemingly to lay the groundwork for his father’s arrival. One of his meetings was with President Ebrahim Raisi, a detail of protocol that indicates the esteem in which the likely leader-to-be is already held in the capitals of neighboring nations.

The Iranians are positively brimming with enthusiasm about the future.

Iran’s first deputy president Mohmmad Mokhber, for example, talked about how relations between their two countries should set the standard for other countries in the region. Iranian Road and Urban Development Minister Rostam Qasemi alluded to the 84 percent year-on-year increase in bilateral trade. The two countries reached an agreement during a joint economic commission on the transit of 400 rail wagons across the Sarakhs border crossing.

This is mostly bravado, though. Trade had ground to a near-halt over the COVID-19 pandemic, so what the sides are looking at now is merely restoring the status quo ante.

The breakthroughs on the energy front are real, however.

Iranian Oil Minister Javad Owji said on January 8 that he hopes his country will at some stage up its imports of Turkmen gas to 10-15 billion cubic meters per year. That volume would be delivered within the format of the swap arrangement reached with Azerbaijan in November. Under that deal, Turkmenistan is committed to supply up to 2 billion cubic meters of gas to Iran, whose remote northeastern regions often experience shortages, while Tehran would supply a commensurate amount to Azerbaijan, which is plugged into a Europe-bound pipeline system. Speaking on January 5, Owji noted that the daily 4-4.5 million cubic meters of gas that Turkmenistan began delivering two days prior were already providing much-needed relief.

Turning from actual pipelines to hypothetical pipelines, the self-styled Islamic Emirate of Afghanistan declared on Twitter on January 9 that it was forming an armed division of up to 30,000 fighters to ensure the safety of the planned Turkmenistan-Afghanistan-Pakistan-India, or TAPI, natural gas pipeline route.

Turkmen Deputy Foreign Minister Vepa Khadzhiyev traveled once again to Herat on January 7 to discuss ongoing efforts to resume construction work on TAPI. Afghan news agency Pajhwok cited Khadzhiyev as saying that building on the Turkmen section of the project would be completed this year. This may come as a surprise to anybody who had read that Turkmenistan finished its bit of the work in 2019. And the ones who read it was already done in 2018. TAPI is a veritable Zeno’s Paradox – the closer it gets to the target, the more it seems like it will never get there at all.

Sometimes Berdymukhamedov’s warnings to minions do have an effect though. Less than two months ago, Shakhym Abdrakhmanov, the deputy prime minister with the portfolio for oil and gas sector affairs, was being called to the carpet for underperforming in his job. On January 7, he arrived to the Cabinet meeting with the happy news that Turkmenistan has started producing A-98 grade gasoline at the $1.7 billion state-of-the-art gas-to-liquids plant that was inaugurated in June 2019 in Ovadan-Depe, just outside the capital, Ashgabat.

The commercial viability of the plant looked compromised from the very outset by the fact that it was producing only EURO-5 equivalent automobile fuel, a product whose standard falls short of the cleaner EURO-6 gasoline (equivalent to A-98) that the European Union, for example, now insists upon.

Abdrakhmanov did not specify, however, how much of this higher-grade gasoline the Ovadan-Depe plant is able to produce. As of last year, Turkmenistan was struggling to produce much EURO-5-standard fuel, let alone its better-quality analog. If there has been a breakthrough it is likely because of the plant management consultancy deal that Turkmenistan was in 2020 seeking to seal with Japan’s Kawasaki, which built the facility in the first place.

Berdymukhamedov delivered some crushing news to aspiring visitors to Turkmenistan. The world-famous Gate to Hell, a giant fiery crater that has been burning away in the Karakum Desert for more than half a century, will finally be plugged, he said. There are varying theories about how the crater came about in the first place. Some attribute it to an engineering accident in the 1970s, others suggest the crater formed on its own and was lit to burn off the leaking gas at some point in the 1980s. Either way, the anomalous sight has become a magnet to those few foreign tourists who are able to make it into the country.

“We are losing valuable natural resources for which we could get significant profits and use them for improving the wellbeing of our people,” Berdymukhamedov said at the Cabinet meeting, without specifying how the crater would be closed.