While Turkmenistan chivvies along its partners in the pipeline project, there are indications it has been less than forthright about its own progress. 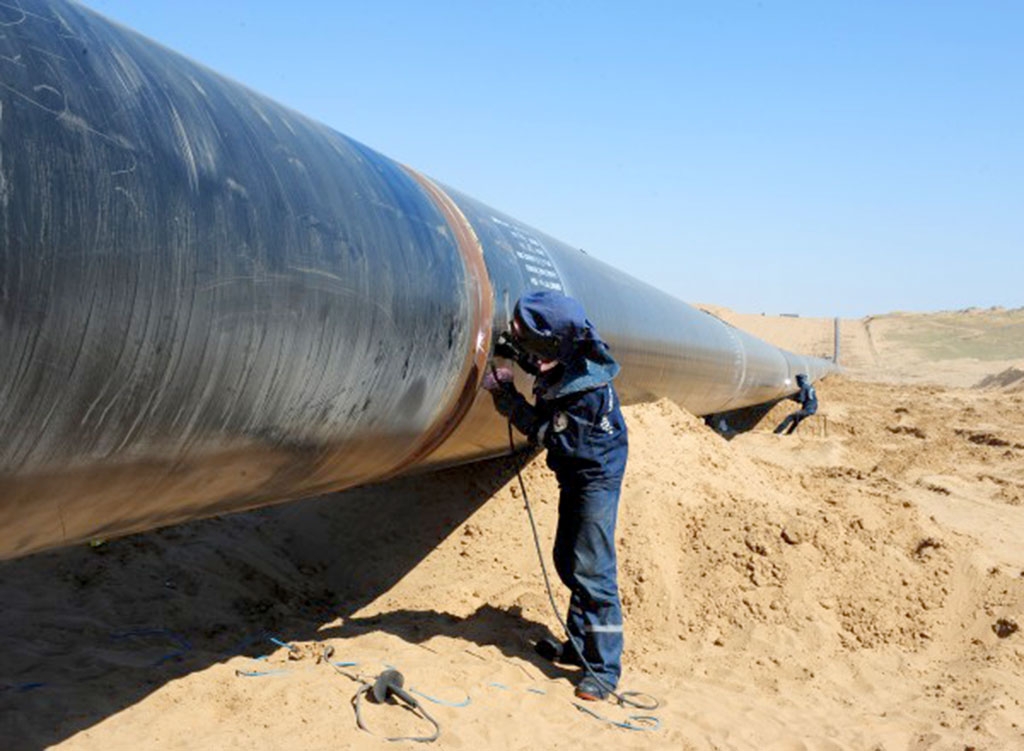 The man charged with making Turkmenistan’s visions of a trans-Afghan gas pipeline a reality headed to Pakistan this week with calls get the ball rolling.

While in Islamabad, Muhammetmyrat Amanov, chief executive of the TAPI Pipeline Limited Corporation, urged his hosts to get to work building their section of the project by March. Amanov has previously said he hopes to send gas to Pakistan by the end of 2020.

But while Turkmenistan chivvies along its partners in the pipeline project, who also include Afghanistan and India, there are indications it has been less than forthright on its own progress. As RFE/RL’s Bruce Pannier has pointed out, reports in November that Saudi Arabia had donated 35 kilometers worth of piping toward completion of the Turkmen section contrasted with government assertions that this stretch had been completed in February.

In an effort to sprinkle a dose of pomp to the March date, Amanov suggested that heads of state from the four countries involved could gather for a start-of-works inauguration ceremony in Pakistan.

President Gurbanguly Berdymukhamedov is no fan of foreign travel, but he has been doing quite a bit recently. His latest sally overseas was to St. Petersburg on December 6, when he attended a Commonwealth of Independent States, or CIS, heads of state summit. The trip was not a certainty ahead of time since he had snubbed a major CIS get-together in Tajikistan in September. That was a particularly notable no-show since Tajikistan was formally handing over chairmanship of the organization to Turkmenistan.

Berdymukhamedov may have attended this time, but there is no papering over the fact that his foreign policy strategy invariably casts him in the figurative role of the aloof partygoer standing in the corner at these shindigs. The broader CIS event also provided an opportunity for side discussions within the format of the Supreme Eurasian Economic Council. Turkmen state media implied that Berdymukhamedov too had been involved in this encounter, but photographic evidence suggests otherwise. A family photo released by the Kremlin showed only the heads of state of Eurasian Economic Union members – Armenia, Belarus, Kazakhstan, Kyrgyzstan and Russia – in attendance.

Still, as the Foreign Ministry noted, Berdymukhamedov did join his fellow leaders to attend a performance of Pyotr Tchaikovsky’s The Nutcracker at the Mariinsky Theater. Ashgabat will play host to the next summit in 2019.

On the domestic front, Berdymukhamedov on December 3 announced plans to build a new institute of higher learning devoted to the study of all things related to the country’s native Akhal-Tele horse breed. When development specialists worry about how Turkmenistan’s tertiary education sector is in desperate need of attention, this is probably not what they are envisioning. Berdymukhamedov frames the need for this kind of specialized knowledge of equine science in pure terms of international prestige.

A day later, the president informed his Cabinet that the Stabilization Fund he set up in 2018 contained “sufficient funds.” That is as much as he was prepared to reveal. The exact content of this fund, which was first set up in 2008, has never been detailed.

Berdymukhamedov cannot entirely disguise the troubled state of the nation, however. At that same Cabinet meeting, he reprised a recurrent theme, decrying the “inefficient use of Turkmenistan's existing [industrial] capacity.” Still, he does have a partial solution. On December 3, the president ordered that the government “saturate” the market with locally produced goods and that imports be cut back.

The president has never been known to accept any responsibility for poor policy, so in his usual fashion he cast his eye about for a fall guy. This time, it was the turn of Industry Minister Kerim Durdymyradov, who was duly issued with a severe reprimand at the Cabinet meeting. The hapless Durdymyradov was just set to mark completion of his first year on the job. He also got a dressing-down in April, but it seems like the end of this particular road is beckoning soon unless he can pull a rabbit out of the hat – the rabbit, in this instance, being something like a giant, fully functioning fertilizer plant.

Away from the tiresome business of governing, Berdymukhamedov spent December 9 exercising at the Ashgabat Olympic Village that he constructed at considerable expense for the 2017 Asian Indoor and Martial Arts Games. A derisively edited video clip posted to YouTube by Austria-based Chronicles of Turkmenistan showed him chiding shamefaced Turkmen sporting officials for failing to live up to expectations at the International Weightlifting Federation championship hosted by Ashgabat earlier this year. In the same footage, he was shown at a bowling alley, throwing one strike after another. Berdymukhamedov then took to the weights in the gym.

This tomfoolery is part a crude social engineering agenda, ostensibly to promote health and well-being. Where the government will sometimes nudge – very forcefully – most injunctions are more transparently muscular. Consider the apparent policy on the marking of Chinese New Year.

RFE/RL's local service, Radio Azatlyk, has reported that the government is banning visual representations of pigs. The coming February 5 marks the beginning of the year of the pig, and the authorities are seemingly unwilling to see a repeat of this past year, which saw a proliferation of images of dogs.

Both animals are anathema to most strictly observant Muslims. There is no obvious evidence that Turkmen officials have ever been especially concerned with promoting staunch religious values, but considerable importance is instead lent to conservative conformism.

It is perhaps in that spirit that the Majlis, a toothless parliament tasked merely with reflecting the president’s will, last week unanimously adopted strict new rules regulating the sale and consumption of alcohol. Now while this policy-making may be inspired by a desire to promulgate clean-living, it is also possible – even likely – that restrictions are mainly intended to secure market dominance for selected elites.

Whatever the real intent, temperance is very much the order of the day. State-aligned media have reported on several initiatives to counteract the proliferation of contraband cigarettes and illegal narcotics. Turkmenportal reported on December 9 that the government had destroyed a cache of such goods in the village of Bagabat in Ahal province. Diplomatic representatives and local elders were apparently invited to attend this ritual destruction. Local youths were likewise brought along to watch – and possibly also inhale – as plastic bag-loads of these substances were cast into furnaces.