Doing business with Russia and Kazakhstan, reopening borders, and honoring the former president’s favorite horse. This and more in our weekly Turkmenistan briefing. 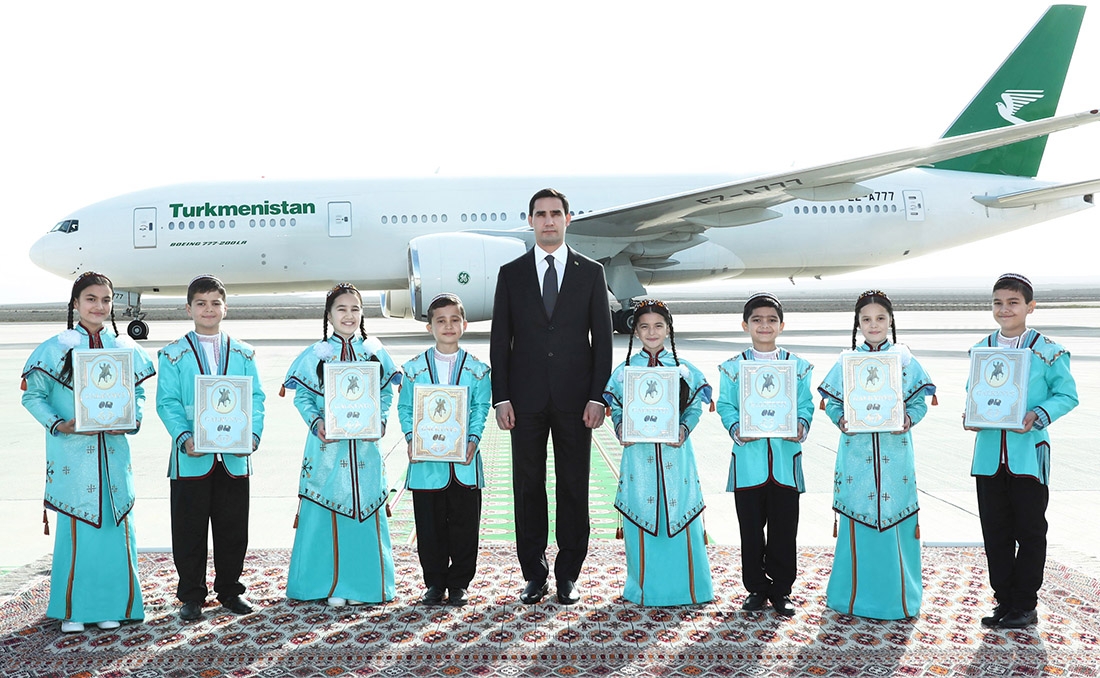 Come fly away with me (government handout)

The Russians know that the quickest way to a Turkmen president’s heart is through his ego.

This explains why Russian President Vladimir Putin does things like bestow his counterpart from Turkmenistan, Serdar Berdymukhamedov, with baubles like the Order of Friendship. According to a Putin decree published on May 18, the 40-year-old Turkmen leader, who has only been in office since March, has made a “great contribution to strengthening the strategic partnership between Russia and Turkmenistan.”

And Russia’s ambassador in Ashgabat naturally occupied a prominent position when the Turkmen Foreign Ministry on May 18 hosted a presentation for the Russian translation of the latest book by Berdymukhamedov’s father and the former president, Gurbanguly. Alexander Blokhin cooed that the translation of “The Meaning of My Life” would enable the “general public of a friendly nation to learn even more about Turkmenistan.”

This flattery does work. Although Turkmenistan purports to maintain a balanced, Kazakhstan-like multi-vector foreign policy, it is evident that Russia occupies a special place.

On May 19, Berdymukhamedov the senior, who still performs official duties in his role as speaker of the Senate, travelled to Kazan, the capital of Russia’s republic of Tatarstan, to attend the 13th International Russia-Islamic World Economic Summit. The ex-Turkmen leader was by far the most distinguished attendee of this remarkably low-wattage event. Neighboring Uzbekistan was represented by its deputy health minister.

It is not hard to see what the likes of Russia – or Tatarstan specifically in this case – seeks in Turkmenistan: the chance to land easy contracts. Berdymukhamedov senior was met off the plane by the president of Tatarstan, Rustam Minnikhanov, and whisked away to the Kazan EXPO International Exhibition Center. While there, he was shown some locally manufactured electric-powered buses and immediately expressed interest in buying some for Turkmenistan, not that he is technically authorized to make such acquisitions.

In his speech to the summit, Berdymukhamedov senior talked in lofty terms about how Turkmenistan “sees its future in friendship, cooperation and mutual understanding with Russia and the states of the Islamic world,” and presumably in that order.

The older Berdymukhamedov got his bit of tinsel too when Minnikhanov honored him with a Tatarstan Order of Merit for his services to the Russian republic.

In Turkmenistan, it isn’t only human beings that receive such attention. Neutral Turkmenistan daily newspaper reported on May 23 that Berdymukhamedov the younger has approved the construction of a monument in honor of a horse owned by his father. Akhan is no ordinary Akhal-Teke horse. In June 2018, the white stallion made into the annals of the Guinness Book of World Records, a beer-fueled chronicler of human and animal achievements profoundly revered by Turkmen authorities, by walking 10 meters on his hind legs in 4.19 seconds. The statue, which will presumably display Akhan in a fittingly rampant attitude, should be unveiled in December.

On a more pedestrian note, President Berdymukhamedov met on May 17 with Igor Bukato, the head of St. Petersburg-based infrastructure giant Vozrozhdenie, which has won its fair share of lucrative contracts in Turkmenistan over the years. The company is still working on construction of a mudflow diversion structure in Ashgabat. Bukato stuck around for a few days. On May 20, he met again with Berdymukhamedov to show him the blueprint for a highway from the city of Garabogaz along the shores of the Caspian Sea to the border of Kazakhstan – a project that Vozrozhdenie is now poised to execute.

This felt like a fortuitous bit of timing. On that same day, Berdymukhamedov met the first deputy prime minister of Kazakhstan, Roman Sklyar, for talks in Ashgabat. Kazakh-Turkmen relations are looking particularly buoyant at present. In Kazakhstan, which is hardly short of its own energy resources, Turkmenistan has somewhat surprisingly found itself a new buyer of natural gas. No details have as yet been provided on volumes, timeframes or prices.

Kazakhstan is also interested in building a grain storage terminal on Turkmenistan’s border with Afghanistan. This is a tantalizing possibility in that it would see the creation of a facility that would ensure Kazakh wheat exporters easy access to two commercially and diplomatically useful markets.

The north-south, Kazakhstan-Turkmenistan axis is coming into sharper relief at the moment as Kazakhstan explores ways to lighten its reliance on transportation routes traversing Russia.

Kazakh Trade Minister Bakhyt Sultanov traveled to the Iranian capital, Tehran, on May 23 to talk with officials there about expanding trade relations and “enhancing the transit potential between the two countries.” Any such initiative would rely on Turkmenistan’s cooperation too, though, since the country lies in the way.

On May 20, as it happens, Turkmenulaggozegchilik, the state agency in charge of issuing entry and transit permits, announced that foreign vehicles will once again be able to start crossing the Iranian border at the Sarakhs checkpoint as of June 1. Operations at the crossing were restricted in March 2020 to prevent the spread of COVID-19. Other crossings were already also up and running, but getting goods across the border typically required cumbersome unloading and reloading of trucks.

International travel across the board looks set to get easier in the imminent future.

State-owned air carrier Turkmenistan Airlines dropped a big clue on May 23 when it published a series of guidelines by which passengers must abide to ward off COVID-19. Since the airline ceased scheduled flights back in early 2020, it seems highly likely this is an indication that routine service is going to resume. Amsterdam-based Turkmen.news reported on May 6 that a government commission was considering authorizing the restarting of regular flights to Dubai and Frankfurt – two important international air hubs.

Still, it wouldn’t be Turkmenistan if a door was not closing while a window opened slightly.

Turkmen.news reported on May 23 that authorities in the city of Dashoguz have started, for reasons best known to themselves, confiscating cars in large numbers. The motivations offered are often trivial, such as mudguards being black and not the apparently required white, the outlet reported, citing residents. The website’s sources maintain that more than 1,500 cars have been impounded so far on similarly spurious grounds. One theory offered is that the police are trying to ensure there are fewer cars on the roads ahead of an expected visit from the president.