Obsessing about sports, building bridges, and speaking up for China. This and more in our weekly Turkmenistan briefing. 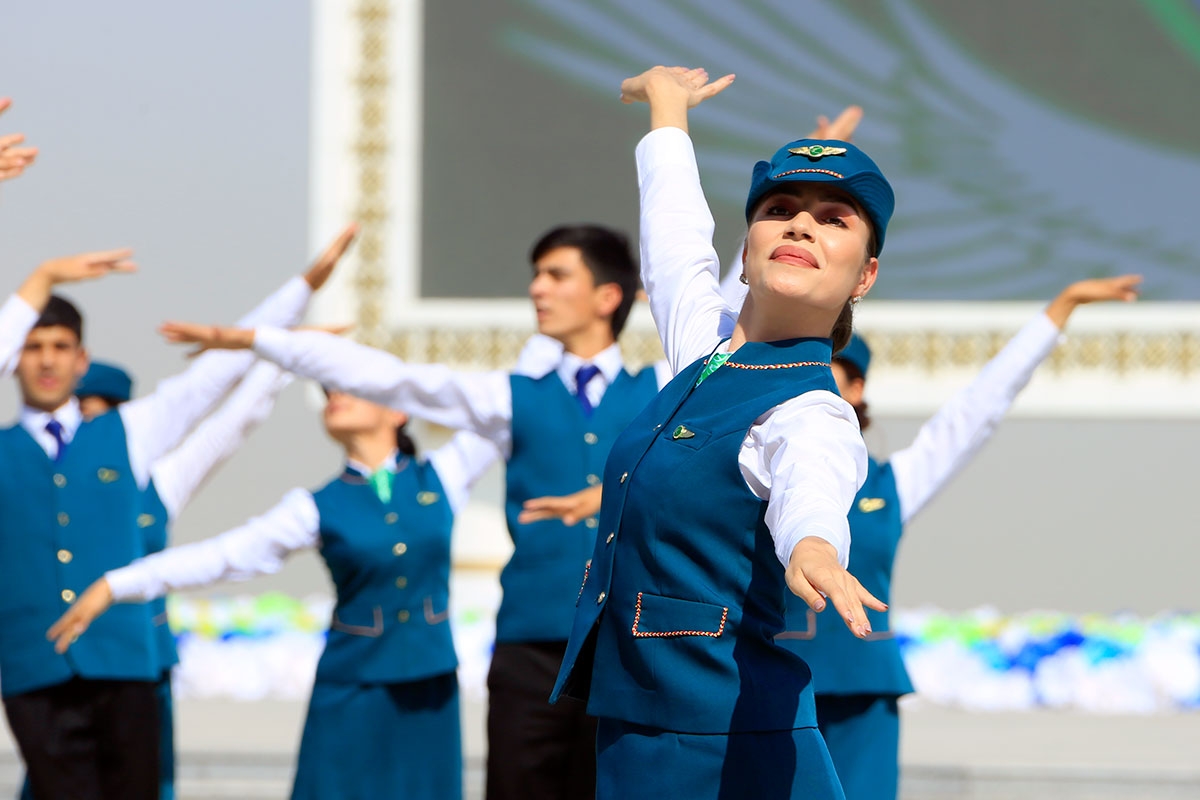 Turkmenistan is slowly reopening its borders, but getting on a flight is no fun. (government handout)

As per the president’s instructions, the government is away from the office for the whole month of August, taking a break at one of several sanctioned domestic resorts.

This point was amply documented in an August 4 evening news bulletin in which Berdymukhamedov and his son, Kerimguly, were seen together cycling through the spookily empty streets of the Awaza resort on the Caspian Sea. The pair later did a light session of weight training in the gym. Unlike his father, from whom he took over this year, Berdymukhamedov does not appear to relish these TV appearances and invariably retains an unreadable granitic expression throughout.

There is an ideological underpinning to all this, though.

The cult around the figure of Berdymukhamedov senior is familiar fare. The attention that the Turkmen regime devotes to sport, and the insistence that every decent citizen should be doing their daily share of keeping-fit, is no less obsessive in nature.

The government narrative is benevolent on its face.

“According to medical science, performing exercise activates all a person’s organs and muscles. He gains strength, his mood improves, and his blood pressure stabilizes,” the state government noted in its report on the Berdymukhamedovs jaunt in Awaza.

The other component to this is that the regime is desperate to burnish its international standing through sporting success, which has by and large eluded Turkmenistan. Of all the countries in Central Asia, for example, Turkmenistan was until very recently the only one without a single Olympic medal to its name. (This changed at the 2020 Summer Games, when Ashgabat-born Polina Guryeva won silver in the women’s 59-kilogram weightlifting category – an event given relatively little attention by sports-mad Berdymukhamedov senior, likely because of Guryeva’s awkwardly Slavic heritage).

The solution to this conundrum is pure Soviet Union, where state ideologists argued for the virtues of “massovost” (mass participation) as a requirement for finding the best sporting talents in the country. The mass collective sporting displays – such as when Berdymukhamedov senior would lead thousands of civil servants on bike rides through Ashgabat – are an unambiguous callback to similar spectacles in the 1930s Soviet Union.

In the absence of sporting glory per se, Turkmenistan would be happy to host a competition of truly global significance. In a speech by President Berdymukhamedov published in Neutral Turkmenistan daily on August 3, the notion of Turkmenistan one day hosting the Olympics themselves was floated.

On August 8, Berdymukhamedov broke off his vacation time to attend a foundation-laying ceremony for a new bridge being built along the western fringe of the Garabogazköl lagoon.

The importance of this piece of infrastructure is that it will enable road-bound freight to move comfortably and in large volumes from Kazakhstan across Turkmenistan to Iran and the Persian Gulf, and vice versa.

Berdymukhamedov made an even grander, and arguably overblown, case for the 354-meter-long bridge.

“The new bridge will effectively serve the needs of freight companies in Turkmenistan, Russia, Kazakhstan, Iran and India and give our countries a short route to countries in Northern and Eastern Europe by means of sea, train and automobile transportation,” he said.

The bridge is slated for completion in 2024.

That contract was bagged by Ukrainian infrastructure builder Altcom and will hopefully be done well. That is more than can be said for a vehicle underpass built in downtown Ashgabat in 2020 by Nusay Yollary, a company said to be owned by Annanazar Rejepov, the husband of one of former president Gurbanguly Berdymukhamedov’s sisters.

Amsterdam-based Turkmen.news on August 8 cited its sources as saying the underpass has been closed amid concerns that it is sagging and thereby posing a danger to traffic passing both over and underneath. The outlet points out that Nusay Yollary was picked as the winning bidder for this presumably lucrative contract only four days after the tender was made public.

This is par for the course for Nusay Yollary, whose success in earning billions of dollars’ worth of government contracts has been amply covered by Turkmen.news.

Turkmenistan rarely comments on situations beyond its borders, so it was striking on August 5 to see the Foreign Ministry restate its adherence to Beijing’s One China policy, which is code for rejecting the very idea of sovereignty for Taiwan. The statement made no allusion to the August 2 visit to Taipei by Nancy Pelosi, the speaker of the U.S. House of Representatives, but the inference was obvious.

That Ashgabat should have been moved to make an oblique but rare reference to an unfolding development elsewhere in the world attests to China’s sway over Turkmenistan. Experts debate endlessly about the import of Chinese debt, but in this case it is clear that if nothing else, the ready supplies of cash has successfully assured loyalty.

A drama has been unfolding in Turkey over the past week or so as large groups of Turkmen nationals desperately try to find ways to fly home. The country has over the past few weeks and months been gingerly opening up again and lifting the travel restrictions imposed to ward off COVID-19. Getting a plane ticket is not easy, though.

As Vienna-based Chronicles of Turkmenistan has reported, only people who have previously signed up at the Turkmen consulate are able to board chartered Turkmenistan Airlines flights from Istanbul to the western city of Turkmenbashi. Late on August 2, a large group of Turkmens assembled at Istanbul Airport to protest, which they did by whistling and chanting. One grievance is that some tickets are allegedly being sold under the counter in exchange for bribes of up to $3,000. The scene repeated on August 8, Chronicles reported.

It will come as a relief for this reason that Turkish Airlines and Flydubai are reportedly planning soon to resume selling tickets for flights to Ashgabat. Turkmen.news reported on August 6 that more Turkmenistan Airlines charter flights have been announced – a decision the website attributes to people’s willingness to stand up for their rights.