All eyes will be on who gets the nod as chair of the Senate, since that person would be in a position to succeed Berdymukhamedov in the event of his sudden death or incapacitation. 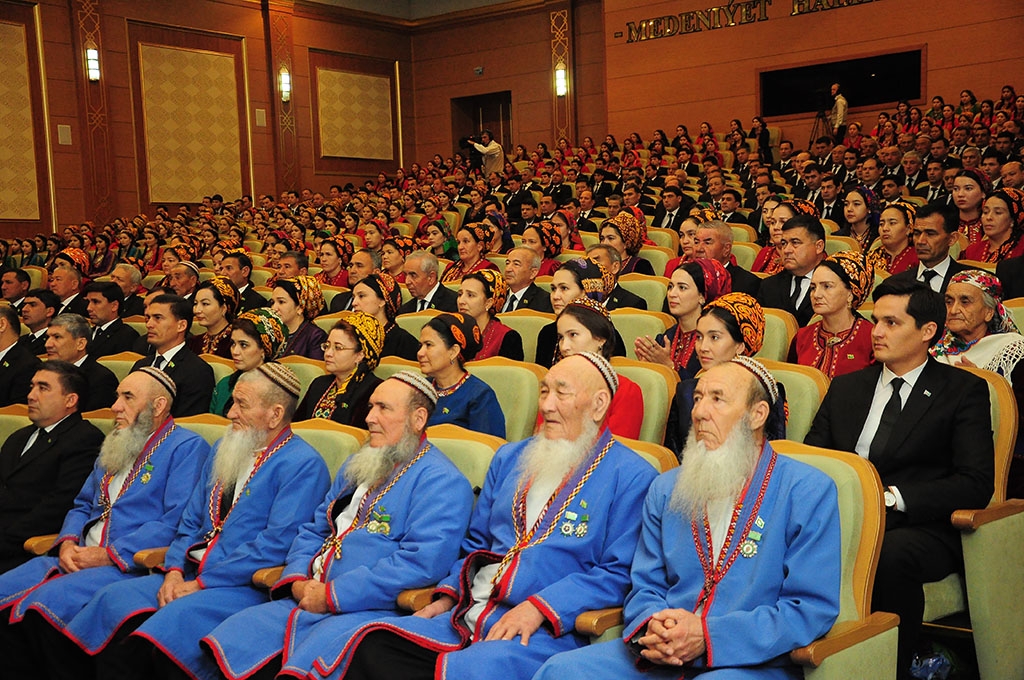 Once constitutional changes are approved by the rubber stamp parliament, it is the Khalk Maslahaty, or People's Council, that will give it a definitive imprimatur of supposed legitimacy. (photo: state media)

The pause button has been hit on life in Turkmenistan, and it will be weeks at the least before that changes.

The national soccer league, for example, has been postponed indefinitely. Arzuw news website reported on August 15 that the suspension of competitions is specifically tied to an earlier Sports Ministry edict on preventing the spread of infectious diseases.

The Turkmen state railways company announced the same day that trains will be halted until September 1. This is just a continuation of an existing policy, though. Almost all railway traffic has been at a standstill since mid-July.

Ashgabat was a regional pioneer in imposing restrictions on international travel when the coronavirus outbreak began going global. Turkmenistan Airlines suspended its flights to and from Beijing as early as the beginning of February. Similar restrictions were later imposed to all international destinations. Turkish Airlines advertises flights to Ashgabat from its Istanbul hub, but data from flight monitoring apps like FlightRadar24 indicate these routes are not actually operating.

But there is one area that will admit no delays. That is the long-promised operation to amend the constitution. Preparations are currently underway for an August 22 sitting of parliament that is to be devoted to the question. That will come on the heels of a meeting of the Constitutional Commission on August 19.

A convocation of the Khalk Maslahaty, or People's Council, a gathering of officials and local dignitaries, is scheduled for September. Once constitutional changes are approved by the rubber stamp parliament, it is this assembly that will give it a definitive imprimatur of supposed legitimacy.

Social distancing requirements, which are being robustly enforced despite Turkmenistan admitting to having no COVID-19 cases, will make the Khalk Maslahaty something of a damp squib. President Gurbanguly Berdymukhamedov said this session will be held via videoconference. This is unfortunate as the Khalk Maslahaty is all about choreography. Hundreds of fulsomely bearded old men, ostensibly delegates for their communities, arrive in their bright-colored robes and vote, after a fashion, on matters of major importance. The performance enables the authorities to claim that state policies are being coordinated with the masses.

More details of the proposed constitutional changes may emerge, but it is likely they will align with what has already long been publicized. Namely, the creation of a second, equally senseless, chamber of parliament – a Senate. The 56-deputy body is intended to be regionally representative, with eight Senators apiece drawn from the country’s five provinces and the capital, Ashgabat. Another eight members will be appointed by Berdymukhamedov. And then the Khalk Maslahaty will be abolished – not the first time this institution has received that treatment.

All eyes will be on who gets the nod as chair of the Senate, since that person would be in a position to succeed Berdymukhamedov in the event of his sudden death or incapacitation. The smart money is on Berdymukhamedov’s son, Serdar, who has been rapidly cycling through important government posts and is now serving as governor of the Ahal province.

Berdymukhamedov presided over another of his Alice in Wonderland meetings of the Cabinet on August 14. This was another of the standard year-to-date progress reports filled with the usual nonsense figures, such as the economy having grown by 5.7 percent. There is no attempt to account for how retail trade expanded by 19.3 percent year-on-year considering how many stores have been closed for epidemiological purposes.

And boasts that average monthly wages for employees of large and medium-sized enterprises are 10.5 percent higher than in 2019 ring a little hollow against the backdrop of reports of mass layoffs.

As for the Turkmen state railway company growing by 17.1 percent when many trains have been at a standstill for months, it feels like government statisticians are not even trying to disguise their fictions.

Meanwhile, the likes of the World Bank have been forecasting zero growth for Turkmenistan in 2020. This is theoretically shocking in view of how Turkmenistan has posted 6-plus percent economic growth for so many years, but the truth is that these aggregate figures are abstract to the point of meaninglessness and based, in any event, on patently phony datasets.

A figure that is declining is the one indicating the amount of grain that Turkmenistan plans to grow and harvest. For this year and the next, the plan is to yield 1.4 million tons of grain, down from the 1.6 million tons said to have been produced in earlier years. Arable land is instead being repurposed for cotton, yields of which should rise 1.25 million tons, up from last year’s 1 million tons.

There is something curious about a government that repeatedly emphasizes its intention to become as self-reliant as possible on its own food production, so as to support domestic producers and obviate the need for imports, intentionally growing less wheat. But the thinking here seems to be that it will be useful to back the potentially more lucrative textile sector and just buy wheat from nearby nations.

Current global grain output data offers a mixed picture on the wisdom of this strategy. In its World Agricultural Supply and Demand Estimates report for August, the United States Department of Agriculture forecast Russian annual output hitting 78 million tons. Analysts have talked up even higher numbers, closer to 80 million tons. The size of those forecasted figures should be encouraging for grain importers like Turkmenistan. Then again, projections for Kazakhstan, from whom Turkmenistan has bought grain in the recent past, have been reduced by 1 million tons.

It is not all about cash crops though. Alongside the wheat-cotton switcheroo, Berdymukhamedov is insisting on more land being earmarked for the cultivation of crops for domestic consumption, like potatoes, “vegetables” – a catchall term that may include tomatoes, onions and cucumbers – and melons. Increased production, the president believes, will be made possible by the application of an “electronic management system in the agro-industrial complex.”

On the personnel front, an array of officials in the justice system were switched out of their jobs this week. Of these, the most high-profile was Dovletmuhammet Murrikov, who was replaced as Deputy General Prosecutor by Rakhim Atayev, who had until now served as chief prosecutor for the Mary province. A handful of other judicial appointments involved mainly far lower personnel at the district level.