Back on his bicycle, Berdymukhamedov orders new monuments for Ashgabat. 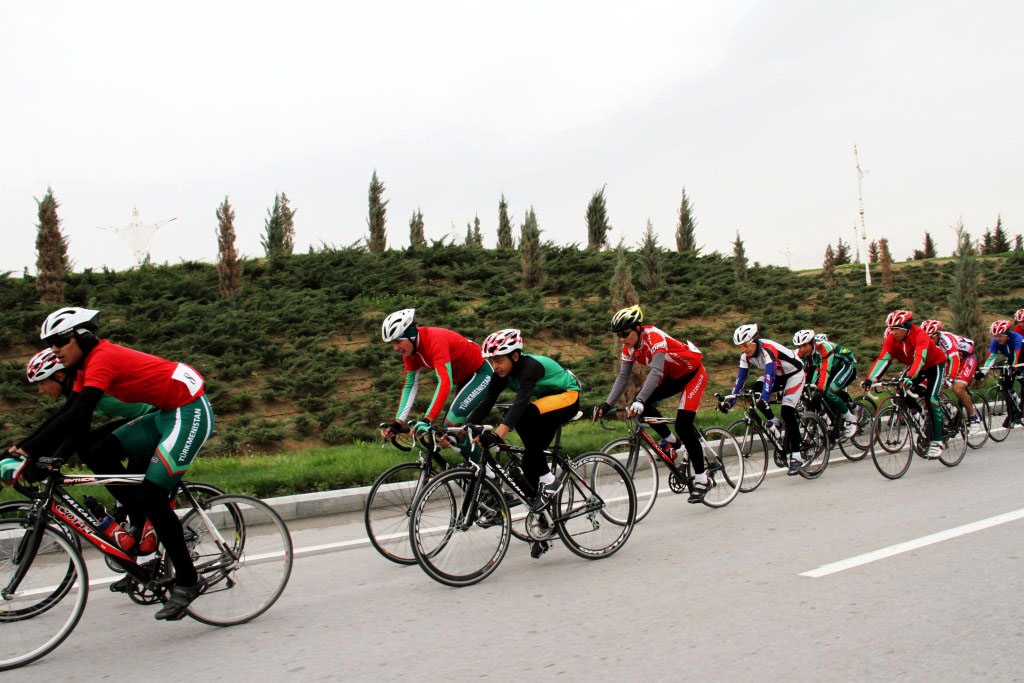 This mass bicycle ride through Ashgabat affirmed the people of Turkmenistan's dedication to a healthy lifestyle, according to the State News Agency. (turkmenistan.gov.tm)

A potentially significant development for Turkmenistan was buried in a report by Dubai-based newspaper Khaleej Times. The paper reports that Dragon Oil, a subsidiary of the state-owned Emirates National Oil Company, or ENOC, will substantially increase its investment plans, spending some $13 billion on its existing fields over the next 10 years. Dragon Oil primarily operates in Turkmenistan, with smaller projects in Iraq, Tunisia, Algeria, Egypt and Afghanistan. According to Dragon Oil chief executive Ali Rashid al-Jarwan, the company plans to more than triple its output by 2025, to around 300,000 barrels of oil per day.

Dragon Oil signed a 25-year production-sharing agreement with Turkmenistan in 1999 to development the offshore Cheleken block in the Caspian Sea. The company says it has since invested almost $6 billion in the country. Al-Jarwan said his company intends to increase production in Turkmenistan to 100,000 barrels of oil per day by 2025.

That last comment naturally implies Dragon Oil is intent on extending its existing deal, but there are some grounds for tempering enthusiasm. The most recent figures available from Dragon Oil, as stated in an auditor report from 2015, show that the company produced some 78,790 barrels of oil daily in 2014 and forecast a rise to 92,000.

In other words, production is likely already at or near its peak in Turkmenistan. Even if the bulk of Dragon Oil’s existing output is in the country, the company appears to see more potential in its Iraq operations.

In a bid to tout for more investments, Turkmen Foreign Minister Rashid Meredov traveled on October 22-23 to Japan, where he met with Prime Minister Shinzo Abe and a number of other senior ministers. The delegation also had meetings at the Japanese Bank for International Cooperation and Nippon Export and Investment Insurance Agency.

Tokyo is an often low-visibility but important investor in Central Asia, and in Turkmenistan in particular. Abe visited Ashgabat in 2015 – on the exact dates of Meredov’s trip this year; a weird but surely intended coincidence – to sign off on $18 billion in commercial deals. As the Economist Intelligence Update mused at the time, “Japan's interest in Central Asia appears to have been sparked by a desire to counter China's influence in the region and to secure opportunities for Japanese firms, which are targeting both raw materials – where China's presence is focused – and intermediate products and consumer goods.”

But any fresh Japanese funds will not be fast in coming – it is almost tempting to suspect Meredov’s task may have been to jump-start stalled initiatives among that $18 billion package.

In the meantime, people in Turkmenistan face a familiar grind. RFE/RL's Turkmen service, Radio Azatlyk, reported that the flour shortage it had detailed the previous week in Dashoguz and Lebap provinces was still being observed. What flour is available is imported from Russia at cost ten times the price set by the state.

Such is the insistence of these reports, that government-linked news outlet Arzuw felt compelled to respond, in an October 25 article, that the shelves of Ashgabat's grocery markets are in fact heaving under the weight of food. It provided pictures of several pristine, untouched shelves and market stalls stacked with juice, tea, sunflower oil, fruit and much else by way of proof for these assertions.

But the Vienna-based Chronicles of Turkmenistan insisted that the photos Arzuw had posted were not actually from government-run stores and that the website’s report glossed over the fact that prices are rising significantly.

And it isn’t just food that is getting more expensive. Azatlyk reported that Ashgabat residents have already begun stockpiling fuel ahead of a widely anticipated price increase.

Turkmens should perhaps look to Berdymukhamedov for budget-trimming inspiration on that front. The president has once again given in to his penchant for cycling. He led what was described in state media as a 12-kilometer "working trip" around the capital on October 24.

A large group of officials, diplomats, businesspeople and students was dragged along to accompany Berdymukhamedov as he inspected some city sights. The president has monuments on his mind. Turkmenistan is trying to lobby for the creation of a UN-approved International Day of Cycling, and the plan is to build a statue in honor of that date in the calendar. The statue will include details like “olive branches,” that being a symbol of the country’s neutral status, “five graceful, frolicking Akhal-Teke horses” and cyclists.

That isn’t all. There are also plans for another statue of poet and philosopher Magtymguly Pyragy to be erected on a nearby hill. According to Infobad, one of several loyal news outlet to have cropped up over the past few years, work has already begun on a monument that will soar some 60 meters (197 feet) above its plinth and require 1,000 tons of bronze to complete.

The bike ride took in a side trip down memory lane.

On his tour, the president ordered a resign of the gold-leaf statue to the late president, Saparmurat Niyazov, that currently stands at the foot of the Walk of Health. This latter construction is a devilish supposedly health-endowing cement staircase devised by Niyazov. The idea was that citizens should take walks along one of two uneven routes – of eight kilometers and 37 kilometers, respectively – to ensure a long life. It is said that on at least one occasion, in 2000, while Niyazov forced his Cabinet to do the exhausting walk on foot, he reached the summit of the Kopet-Dag mountains by helicopter. Indeed, though his Walk of Health statue shows him donning a well-trimmed tracksuit, Niyazov was anything but an exemplar of salutary living. Sure enough, he died of sudden heart failure in December 2006, at the age of 66. Quite how the statue is to be redesigned was not divulged.

Tucked away among all this statue business was a telling line about Berdymukhamedov ordering the mayor to rationalize the use of electricity in the capital city, a sure sign that the government senses the need for budget cutbacks. The president also suggested the “operations of fountains” need to be optimized.

Away from this excitement, Acting U.S. Deputy Assistant Secretary of State Emilia Puma, whose remit includes South and Central Asia, dropped by Ashgabat on October 26 for the annual session of U.S.-Turkmenistan bilateral consultations. No major announcements were made. There was some verbiage from the Foreign Ministry about “opportunities for activating cooperation between the private sectors of the two countries, based on proposals made during the joint business forum in New York.” This was a reference to Berdymukhamedov’s recent business outreach exercise following his attendance of the United Nations General Assembly.