The sudden smash-and-grab for foreign currency confirms that Turkmenistan is feeling the pinch from the collapse in demand for its natural gas. 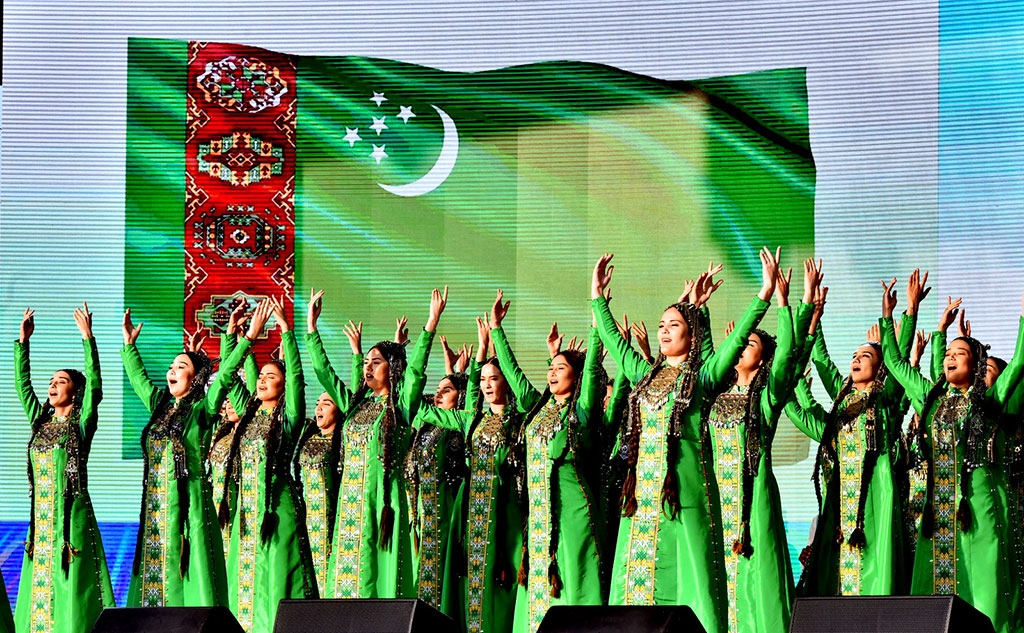 Celebrating the flag on May 18 (state media)

One would imagine a country as equine-centered as Turkmenistan might know of the futility of shutting a stable door after the horse has bolted.

And yet, President Gurbanguly Berdymukhamedov mentioned en passant, at a Cabinet meeting earlier this month, that the impending crisis precipitated by the coronavirus pandemic might require the government to create “reserve funds to ensure macroeconomic stability.” The phrase “a day late and a dollar short” comes to mind.

The implications of Berdymukhamedov’s remarks became a little clearer on May 15, when he announced that local companies will be forced to relinquish all their foreign currency proceeds to the government, as opposed to 50 percent, as was previously the case. Needless to say, dollars would be purchased by the government at the official rate of 3.5 to the manat, rather than the more realistic 20-plus rate of the black market.

Turkmenistan has had something it calls a Stabilization Fund since 2008, back when Berdymukhamedov was still viewed as a potential reformer. When he first proposed the idea, he said the fund would “help avoid the negative economic impact of global economic and financial crises."

But Ashgabat had rainy-day reserves even before that. The State Fund for the Development of the Oil and Gas Industry and Mineral Resources created in 1996 was one. More substantial, however, was the murky Foreign Exchange Reserve Fund, a pot of cash held in a Deutsche Bank account. The history of Turkmen reserves actually dates back to 1989, when the Soviet Central Bank granted a commercial bank in the Turkmen SSR license to manage foreign currency. The money was after independence turned over to a state bank, the Central Bank, and then finally poured into Deutsche Bank accounts administered as something tantamount to a personal piggy bank by the late President Saparmurat Niyazov. (Deutsche Bank, however, rejected this characterization when the fact came to light in 2007.)

The new-look, 2008-vintage Stabilization Fund operates on the principle that it is topped up at the end of every fiscal year with surpluses from the state budget. How the resources are then utilized are in effect under the sole purview of the president – parliament, such as it is, gets no say.

This sudden smash-and-grab for foreign currency confirms what has been evident for weeks. Namely, that Turkmenistan is feeling the pinch from the collapse in demand for its sole export commodity of significant value – natural gas. China is buying less gas from the likes of Turkmenistan, not that Ashgabat is admitting this. For confirmation of these trends, it is necessary to turn to reports like those by S&P Global, which earlier this month cited an Uzbek energy official attesting to the Chinese cuts.

The reaction to the forex-buying edict appears to have had limited impact so far on the black market. Vienna-based Chronicles of Turkmenistan reported on May 16 – one day after the announcement – that the dollar was trading in Ashgabat at around 21.5 manat. In other words, there has been no major fluctuation, although it stands to reason that this new arrangement will prove a powerful incentive for the illicit trading of hard currency.

This is certainly an interesting time for Dovran Khudaiberdyev to start his job as the new chairman of the Union of Industrialists and Entrepreneurs, or UIET, the parastatal entity charged by Berdymukhamedov with willing a modern market economy into existence. Khudaiberdyev, previously deputy chairman, was elected at a UIET general meeting on May 13. The fate of his predecessor, Alexander Dadayev, nicknamed “Berdymukhamedov’s wallet” for the fact that many UIET contracts appear to be handed to the president’s relatives, is uncertain. State media reported on April 1 that he was leaving the post for retirement, but the suddenness of the move suggests something else may have been afoot.

Turkmenistan has been through a cycle of pumping its beleaguered business community for cash in relatively recent history. Indeed, it fell to Dadayev in 2016 to nudge entrepreneurs into giving up $100,000 apiece to underwrite the cost of helping alleviate a crisis then caused by low global energy prices. “In this difficult time, we members of the national business community should help our country and our dear president,” Dadayev said at the time.

Not that it was really a request. “Those that do not pay the sum will have their oxygen cut off. You know that the [UIET] has the means to do this,” Dadayev was then reported as saying by Chronicles.

Even in Turkmenistan, repression has a finite utility in quelling grumbling. Chronicles reported, for example, how city hall officials in Turkmenabat were forced on May 14 to come out to speak to an impromptu assembly of local residents in the Zhelezhnodoroga district frustrated by government inaction following the destructive impact of unusually powerful winds earlier in the month.

A video uploaded to the internet showed what appeared to be hundreds of people present. RFE/RL described this as the “largest demonstration in Turkmenistan since independence in 1991.” Consultations with the community have apparently produced commitments from officials to provide funds or loans for the repair of homes damaged in the storms.

A more low-key protest was held outside the Turkmen Consulate in Istanbul, as a scattering of people held up signs and condemned Berdymukhamedov personally for the government’s handling of recent natural calamities (whose occurrence state media has not even acknowledged). Although this rally was small, it was notable for having taking place at all, since such is the severity of Ashgabat’s despotic practices that even Turkmen nationals abroad rarely dare express opposition to the government.

In this period of especially acute isolation, it is also noteworthy to see shoots of engagement with the outside world. Turkmenistan on May 15 submitted an application to the World Trade

Organization to join the body in observer capacity. Dreams of future WTO accession interlink somewhat counterintuitively with Ashgabat’s import-substitution agenda, inasmuch as the government seems confident the shiny new food manufacturing and textile facilities that it boasts about on state media will one day help radically diversify the country’s export offerings. This is market reform from above.

More immediately, Turkmenistan is exploring ways to revive regional trade frozen by the ongoing pandemic. To that end, Deputy Prime Minister Bayramgeldi Ovezov last week unveiled, during talks with opposite parties from Iran and Uzbekistan, plans to install “disinfection tunnels” for cargo crossing the border.

With Turkmenistan braced for tough times, its population will need some moral encouragement. Berdymukhamedov is pinning hopes in that direction on his beloved grandson Kerimguly, whom he instructed to compose "festive music in honor of significant dates and other important celebrations held in the country," according to a report from AFP.