Turkmenistan: Digging your way out of trouble

The only dependable way to access credible information on Turkmenistan these days is to have it leaked. 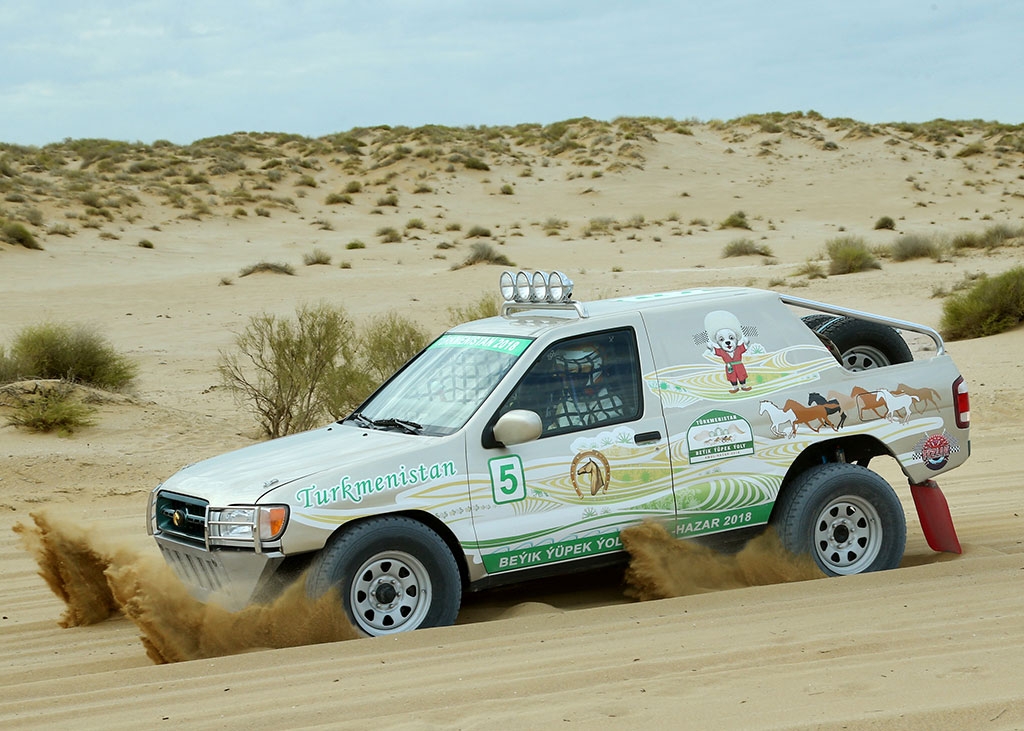 On the off-road again (turkmenistan.gov.tm)

There is a sequence in Barbet Schroeder’s 1974 documentary about the late Ugandan leader Idi Amin in which the larger-than-life dictator is shown challenging his younger associates to a race in the swimming pool. A clearly clumsy and inept swimmer, Amin nonetheless wins — obviously.

The moral of the scene is how foolish tyrants allow themselves to be deluded into believing themselves winners when all the evidence points elsewhere. It is not probable that Turkmenistan’s President Gurbanguly Berdymukhamedov has seen the film. And if he has, he does not appear to have learned its important lesson.

So again, state media this week dwelled on Berdymukhamedov’s never-ending antics. On August 18, he took a rally car on test drive ahead of the Amul-Khazar race — a contest that the government hopes will put the country on the international motor sports map. Berdymukhamedov's dauphin, the deputy foreign minister and member of parliament Serdar Berdymukhamedov, came along for the ride.

Back in May, state media claimed that Berdymukhamedov had given an impromptu demonstration to rally car drivers and posted one of the fastest times in a competition challenge while doing so. For good measure, he won another rally car race in July, despite supposedly giving his competitor a sizable head-start.

All kinds of efforts are being undertaken to make Amul-Khazar 2018 a success. RFE/RL’s Turkmen service, Radio Azatlyk, cited its correspondents as saying each of the country’s five regions, or viloyats, is being required to dispatch 7,000 spectators to convey the impression of a popular event.

“According to the instructions, they should stand along the route of the rally and in their capacity as spectators, make a noise,” a correspondent on the ground told Radio Azatlyk.

Turkmen television viewers may well expect more presidential rally tomfoolery. When asked earlier this month whether Berdymukhamedov might take part in the Amul-Khazar race, the rally director responded that organizers would be thrilled to have him take part.

In the most wildly inaccurate metaphor of state television’s pre-coverage of the rally, Berdymukhamedov is shown at one stage getting his self-built car stuck in the sand. He is then seen standing on top of the car, for some reason, and then personally digging it out of its trap with his own bare hands.

In the real world, there is almost no impasse Berdymukhamedov appears capable of resolving without hapless and destructive bumbling.

At the end of July, an Iranian official was quoted by Azerbaijani media as saying that a barter agreement had been struck to end Iran and Turkmenistan’s gas price dispute. But on August 15 a report in Iran’s official Mehr news agency contradicted this.

According to Mehr, Turkmen authorities formally filed suit against Iran at the International Court of Arbitration over the dispute. A resolution could reportedly take as long as two years. Back in January, it was Iranian oil minister Bijan Zanganeh who was threatening to file arbitration claims. It would appear that pre-arbitration settlement efforts, typically the first stage of such disputes, have now failed.

This was only days after the ostensibly historic Convention on the Legal Status of the Caspian Sea was agreed. Energy-focused publication S&P Global Platts described this event as a boost to “regional energy cooperation." The deal is also supposed to improve the prospects for the long-mooted Trans-Caspian pipeline, a project that would presage a possible cash bonanza for Turkmenistan.

But a Q&A statement from Russia’s Foreign Ministry published on August 17 may have somewhat curbed the ebullience. Moscow’s equivocation focused on a protocol signed by the environment ministers of the five Caspian littoral states on July 20. The Russian Foreign Ministry explained that this protocol "secures the right of each of the five states to participate in a comprehensive evaluation of activities that could affect the natural environment of the Caspian Sea … a very thorough analysis of such activities by all potentially affected parties will be required.”

That does not sound great for the Trans-Caspian Pipeline. Indeed, by some reckoning the situation may now be even worse than it was before the August 12 Convention was signed, as Russia is implying that Turkmenistan has in effect agreed to a veto on Caspian projects. There is not a clear-cut consensus on this matter, however, and there are experts who insist the environmental stumbling block can be easily overcome.

Still, the messaging emerging from Turkmenistan is less than reassuring. When Berdymukhamedov met Russian President Vladimir Putin in Sochi on August 15, the state news agency’s write-up of the encounter did not even refer to the treaty. Even the often seemingly well-informed, foreign-based Chronicles of Turkmenistan was at a loss, describing the topic of discussions as a mystery.

The only dependable way to access credible information on Turkmenistan these days is to have it leaked. That is what happened when the British-based openDemocracy website was handed an intriguing trove of documents compiled by the Turkmen Embassy in Ankara between 2008 and 2014.

The findings gleaned from these leaked documents and published on August 16 demonstrate how intensely the government spies on its own citizens studying abroad. Diplomatic staff have reportedly recruited a network of informants to monitor students in an elaborate flow of data that includes not only details on academic performance, but also whether the object of observation is involved in potentially non-approved religious groups.

While funds and energy are spent on spying on students abroad, back at home, the Education Ministry is so pinched for money that some teachers are forced to buy their own laptops, according to Azatlyk.

It is good for some though. Eric Stewart, head of the U.S.-Turkmenistan Business Council — membership starts at a mere $3,000 — dropped in to Ashgabat and paid cringing obeisance to Berdymukhamedov. The Golden Age government portal cited Stewart as saying that the U.S. business community is interested in gaining a foothold in the Turkmen market, what with its “favorable investment climate” and all.

Stewart was accompanied in his curtsying, as well as a yacht ride on the artificial river in the Awaza resort on the Caspian, by a man called Jason Fleming, director of two companies, OSI Systems and S2 Global. These companies are self-described as manufacturers of “specialized electronics systems and components for critical applications in homeland security” and "borders and events security detections systems.” Touting surveillance equipment to Turkmenistan feels like a good bet.