While the president and his son indulge their favorite pets, food for people is increasingly scarce. Our weekly Turkmenistan briefing. 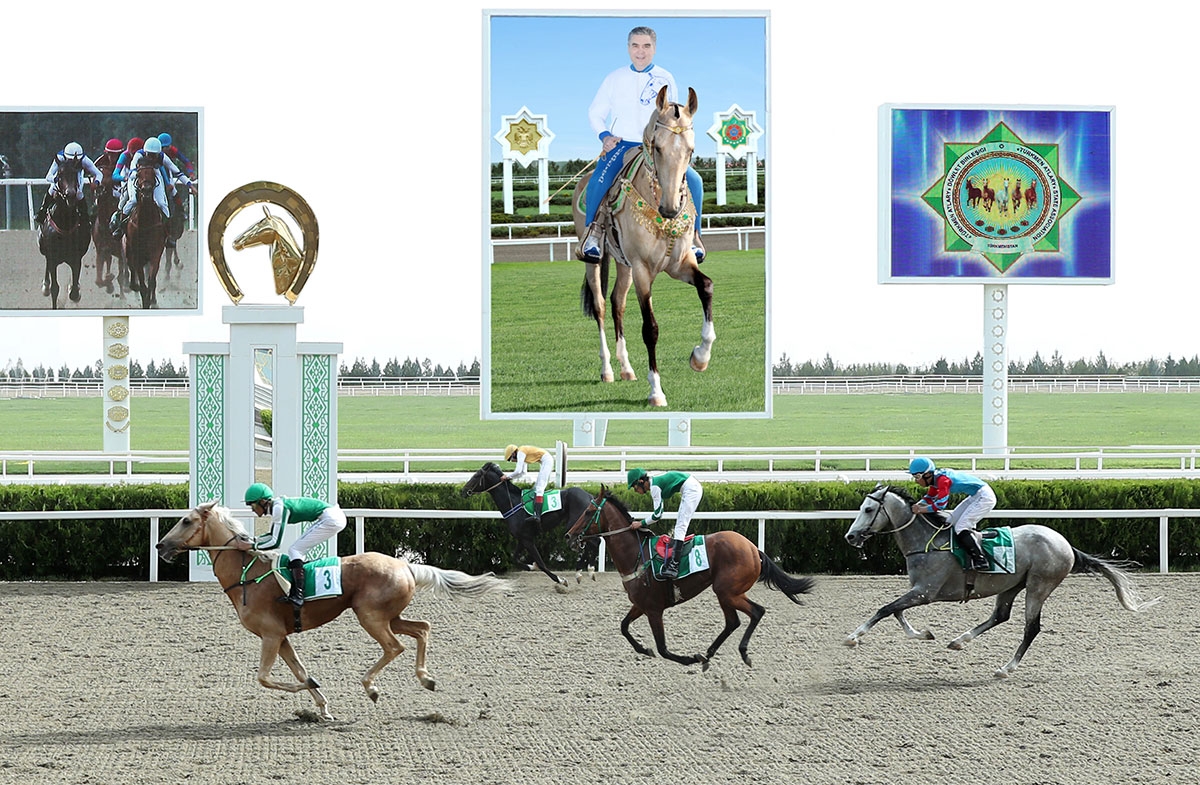 Watching over his team (state media)

Following the death of his father earlier this month, President Gurbanguly Berdymukhamedov disappeared from public view for some days.

In his absence, the spotlight of state media was turned instead on his son and apparent successor-appointee, Serdar.

Although Serdar has been given a number of important new jobs recently, nothing has consumed as much of his attention of late as dogs and horses. On April 21, the first day of his father’s absence, he oversaw the opening ceremony of the new joint premises for the International Association of Akhal-Teke Horse Breeding and the International Turkmen Alabai Dog Association.

Anybody imagining this was a trivial event would be very much in error. Evening news devoted more than 50 minutes to covering the inauguration ceremony and the subsequent maiden conference of the Alabai association. One section of the program was dedicated to a speech delivered by the younger Berdymukhamedov in a monotonous drone very much in the mold of his father.

The next day, the Neutral Turkmenistan state daily featured Serdar’s picture on its front page to leads its extensive coverage of the dog and horse center opening. There is little underestimating the significance of this. Only President Berdymukhamedov normally gets front-page treatment – he gets it every day in fact – so the editorial choice is highly suggestive indeed.

Still, it might not be wise to read too much into front pages of Neutral Turkmenistan. Judging by the newspaper’s output for the past week, one might conclude there was nothing of note happening in the country but horses and dogs. The ample equine-canine coverage has all been a run-up to the first-ever joint national horse-dog holiday marked on April 25.

Festivities were marked with a multitude of horse races, outdoor festivities and a competition for the country’s most remarkable Alabai. The winner was a dog called Akhan, who belongs to the State Border Service. His handler, border guardsman Recepmyrat Myradov, won a Toyota Camry and was granted an honorable discharge in recognition for making the sheepdog so very formidable. 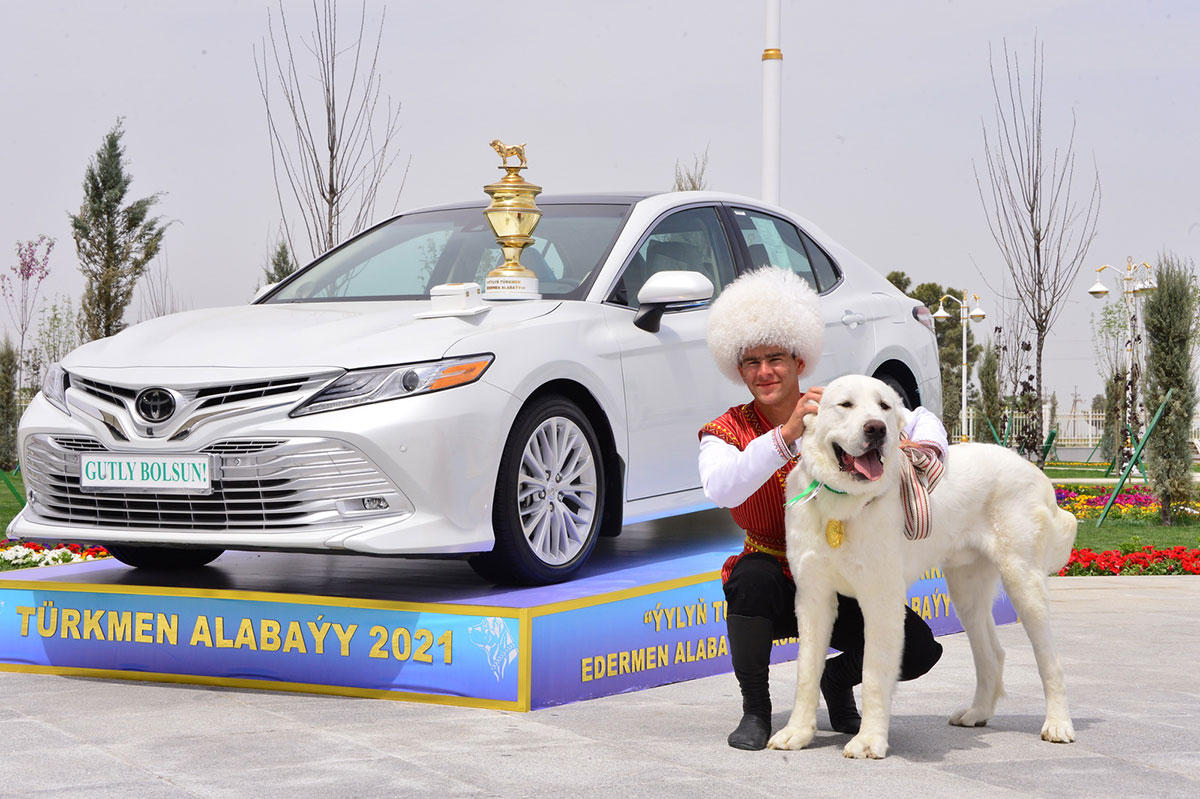 When Berdymukhamedov eventually emerged from his brief mourning-related leave of absence, it was for a very low-wattage teleconference meeting with the leaders of the country’s five provinces.

His signoffs to the governors were boilerplate to a fault. They were all given variations, depending on the province in question, on a generic instruction to ensure rich harvests of cotton, wheat, vegetables and melons.

Food persists in being a problem, however. As Amsterdam-based Turkmen.news reported on April 23, shoppers in Ashgabat have noticed a steep rise in the cost of imported flour. Where 25-kilogram bags of Kazakh flour used to cost 300 manat (around $7.70 at black market rates), the price has now risen to 390 at the same market, the website reported.

Most people can only afford the far cheaper and heavily subsidized flour sold at state stores, but it is not always available for sale. When it is, the lines are long.

Although the government talks incessantly about the transition to market rules, the reality is that these notions quickly go out of the window when economic maladministration forces the whole machine to grind to a halt. It was reported earlier this month that authorities in Ashgabat were demanding that privately owned bakeries cease production so as to help alleviate the shortage of flour in state stores. The suspicion was that private stores were buying up subsidized flour and then slapping on a mark-up.

In Balkanabat, capital of the western Balkan province, families reliant on state stores have had their rations cut, Turkmen.news reported on April 21. Each household, immaterial of how many people it includes, are eligible for one chicken leg, a liter of vegetable oil and 250 grams of sugar per month at subsidized rates. Even then, the stores can barely cater to more than 20 people daily.

And this may not be a problem exclusive to the provinces. Vienna-based Chronicles of Turkmenistan reported on April 25 that shelves in state stores in Ashgabat are often empty, Soviet-style, as much-sought stapes like oil, beef, chicken, sugar, flour and eggs are not imported in sufficient quantity.

Indeed, data from the Eurasian Economic Union, a Moscow-led trading bloc, show a sharp contraction in Turkmen imports in January and February, compared to the same period in 2020. Imports totaled $65.3 million – only 35 percent of what they were last year, Chronicles calculated.

Some commodities were in higher demand though. Turkmenistan bought four times more potatoes this year than in 2020, mostly from Kazakhstan. Wheat and flour imports fell by about half and a quarter, respectively.

The closest the government has come to providing grim light comedy at these times is its report for 2020 from the national Commissioner for Human Rights. Comic because its farcical dissembling has to be even more preposterous than usual. Grim because the tragedy it is covering up could not be bleaker.

“From the first days that the acute infectious coronavirus disease began to spread in the world and the first cases were being recorded in other countries, the Ombudsman, being aware of the global situation, kept the situation of human rights under observation,” the report insists.

What follows is an entirely positive account of the government’s activities to stem the spread of the virus. No talk of the fact that the state worked hard to disguise that there was in fact a substantial outbreak.

And yet, over the past year, the ombudsman’s office received a mere three written complaints and two verbal complaints from members of the public regarding healthcare matters.

Even if this were accurate – and it may well be, since no sensible person could reasonably expect the human rights ombudsman to actually do anything – there may be a good reason. The same report states that the Interior Ministry received 10 complaints from people in pre-trial detention facilities and prisons.

“Investigations were accordingly conducted, and the indicated facts were not confirmed,” the ombudsman’s office stated.

In his other item of business this week, Berdymukhamedov got on the phone with Russian President Vladimir Putin to discuss general bilateral relations and, more specifically, to prepare for a pair of concurrent Caspian summits taking place in Moscow this summer.

The Turkmen leader noted that Ashgabat will be represented by somebody at the deputy prime minister level. There are many of those in Turkmenistan, but in this instance, it is a transparent allusion to Serdar Berdymukhamedov.

The time is coming when Serdar will have to serve as a proxy for his father in more than just dog and pony shows.