As hopes for an Afghanistan gas pipeline fade again, there is more upbeat news to the west. 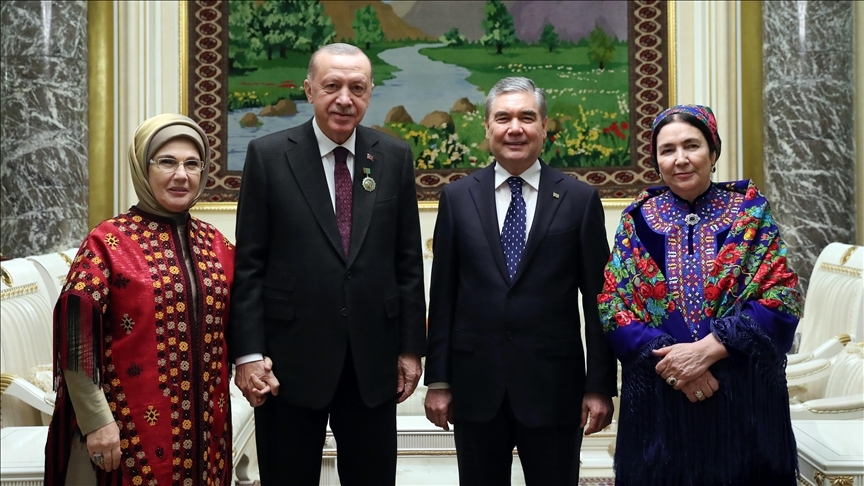 The president of Turkmenistan this week entrusted his son and presumed heir with yet more authority by putting him in charge of the oil and gas industry.

Speaking at a government meeting devoted to the energy sector on November 24, Gurbanguly Berdymukhamedov repeated his relentless mantras about needing to increase the output and export of natural gas, diversify supply routes and attract foreign investment.

Turning to his son, Serdar, a deputy prime minister, the president then gave instructions that he personally “take measures to solve the objectives set for the oil and gas complex in a timely fashion.”

As for the all-important export diversification agenda, there was good news and bad news.

“At the moment no one is working on this project in Afghanistan as well as on other projects,” the minister was quoted as saying in remarks to TASS in Yekaterinburg, where he was attending a session of a Pakistan-Russia intergovernmental commission.

This offers some useful additional context for the exchanges that took place earlier this month between Turkmen and Afghan officials in Herat, where conversations focused on progress not just on implementation of TAPI, but also the Turkmenistan-Afghanistan-Pakistan (TAP) high-voltage power transmission lines, fiber optic connections, and a railroad. The Afghan position outlined at that time was that it was a lack of funds that was holding up work.

Because of the uncertainty alluded to by Omar Ayub Khan, the prospect of international financial institutions providing major funding for anything Afghanistan-related looks weak for the foreseeable future, so Turkmenistan, which is chronically reluctant to invest its own money in transnational projects, is in something of a bind.

There was slightly more heartening news from the west, with Azerbaijan, Iran and Turkmenistan agreeing to a gas swap deal. Under this arrangement, announced during a meeting between the leaders of Azerbaijan and Iran, Turkmenistan will supply gas to Iran, which will in turn supply an equivalent amount to Azerbaijan. The need for this pass-the-parcel system is necessitated by the layout of Iran’s gas grid. Although the country is rich in the resource, remote areas near the Turkmen border often run short.

In truth, though, the volumes are tiny, amounting to around 1.5 to 2 billion cubic meters of gas annually, so the deal is symbolic more than anything. Any talk of this being a way to obviate the need of a trans-Caspian route is quite out of place.

If energy cooperation is to take place between Turkmenistan and Azerbaijan, it won’t need to be with the aid of intermediaries. Berdymukhamedov met on November 26 with Azerbaijani Economy Minister Mikayil Chingiz ogly Jabbarov to discuss this very matter. State media reported that the pair pledged their respective governments’ intention to pursue the joint development of energy projects.

This thread was picked up again on November 29, when Vagit Alekperov, the Baku-born chief executive of Russian oil giant Lukoil, visited Ashgabat for talks with the president. The Neutral Turkmenistan daily newspaper’s report on this conversation states explicitly that one of Ashgabat’s expectations from this partnership is that Lukoil will assist Turkmenistan’s aim of diversifying energy export routes. Statements like these complicate the simplistic narrative of any trans-Caspian gas route being built in the teeth of Russian objections, since Lukoil, despite being a private company, could never act in defiance of Kremlin designs.

Berdymukhamedov has been a busy host of late. Between these two aforementioned meetings, he chaired the fifteenth summit of the Economic Cooperation Organization, or ECO – an unwieldy talking shop that comprises Afghanistan, Azerbaijan, Iran, Pakistan and Turkey in addition to the five former Soviet states of Central Asia. Laughably for an organization that has rarely knowingly enacted any especially practical initiative, this event culminated in the signing of something called the Ashgabat Consensus on Actions.

The main goals outlined in the document – namely, creating a free trade zone across the would-be bloc and developing roadmaps for industrial cooperation – are nothing if not ambitious. They will also wither under the inescapable drag of reality.

What looks more attainable is membership in the World Trade Organization. Turkmenistan has now formally filed its bid to become a full-fledged member, WTO Director General Ngozi Okonjo-Iweala announced on Twitter on November 25. Turkmenistan has dreams of seeing its processed foodstuffs and textiles in households across the world, and WTO membership is accordingly seen as an important steppingstone toward getting there. If the experience of neighbors like Kazakhstan and Uzbekistan shows anything, however, this is going to be a long and difficult road. This is especially so in light of Ashgabat’s monomaniacal import-substitution agenda. A generous interpretation for this policy is that the Turkmen government wants its fledgling private sector to develop resilience under the loving eye of the protectionist state before the floodgates are ultimately swung open. Precedent is not encouraging. History is littered with failed experiments in this very kind of thing.

In a curious sidenote from the ECO summit, Berdymukhamedov’s wife, Ogulgerek, was photographed at a public event for the first time. She posed for the image alongside her husband and Turkish President Recep Tayyip Erdogan and his spouse, Emine Erdogan. The photograph was taken and disseminated by Turkey’s state-run Anadolu Agency. It should go without saying that no similar image was reproduced in Turkmen state media, but Ogulgerek Berdymukhamedova did appear fleetingly in a TV report on her husband’s meeting with Erdogan.

The prohibition-happy government has somehow managed to dream up something new to ban. As Vienna-based Chronicles of Turkmenistan reported on November 24, Turkmens will now be forbidden, unless they can get prior permission, from visiting the world-famous fiery Darvaza gas crater, better known as the Door to Hell. Chronicles cited its sources as saying the ban, which apparently does not apply to tourists, has been imposed on the not-unreasonable grounds that gas emissions pose a potential danger to visitors.

This is just more hypocrisy, though. There seemed to be little fear about safety back in the summer of 2019, when Berdymukhamedov was shown on state television supposedly doing doughnuts in a car only meters away from the edge of the crater.