Turkmenistan: Drifting without a plan

The government is doling out contracts galore. That doesn’t mean everyone will get paid. 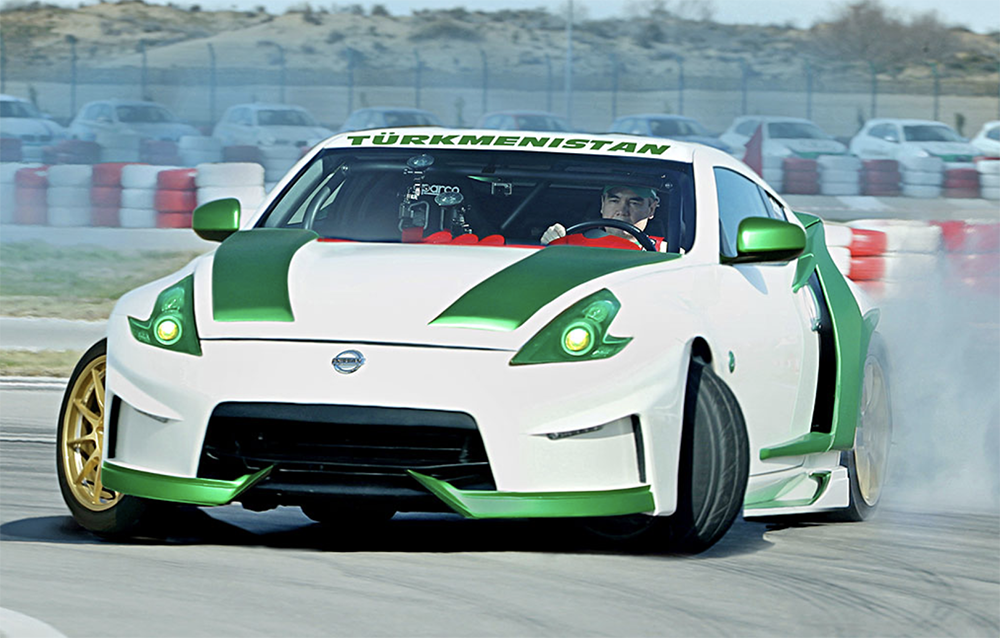 The president has decreed that Turkmenistan’s private sector be the new big thing, so the doling out of contracts is becoming a familiar routine.

Gurbanguly Berdymukhamedov’s yen for cycling inspired him to order the erection of a new grotesquery last fall – a tottering monumental trifle of gold-leafed cyclists, peace symbols and frolicking Akhal-Teke horses. The task of confecting this creation was this week awarded to Sport Yyldyzy, which also goes by the Russian name Zvezda Sporta.

This outfit has landed government gigs before, like Ashgabat's Bagtyyarlyk sports center. Just to make sure the company does not stray too far from its brief, Deputy Prime Minister Dadebay Amangeldiyev has been charged with keeping an eye on works.

Another obscure company, Gündogdy, got an even juicier contract to build an airport in the town of Kerki in the Lebap province. The location is as deserving as anywhere of the title for middle of nowhere, but one media report describes the terminal as integral to the government’s 2025 targets on socio-economic development. French multinational Thales Group, which has profited handsomely from Turkmen profligacy, is reportedly equipping the airport.

Government insistence that such work is awarded through legitimate tenders is hard to accept at face value. Gündogdy is, like seemingly all viable local enterprises, a member of the ubiquitous Union of Industrialists and Entrepreneurs.

For those who are outside the magic circle, things are less glowing. The apparent suicide in Ashgabat of Turkish executive Goktug Gozutok, confirmed by Turkish media on February 21, hints darkly at the stresses that must be endured by regular investors. Gozutok worked for the Turkmenistan offices of Coca Cola Içeсek, a Turkish soft drink bottler and purveyor.

RFE/RL's Turkmen service, Azatlyk, cited unnamed sources as saying that Gozutok may have suffered from “financial problems connected with the activities of the company in that country.” According to Eurasianet sources in Ashgabat, the manager of the hotel from whose balcony Gozutok threw himself to his death was fired. More heads may roll in the coming days.

Like a latter-day Reaganite, Berdymukhamedov has talked up the virtues of the market, and yet the politically expedient instinct to regulate remains. On February 22, he signed a decree mandating that the government set prices for an as-yet undefined list of goods, products and services. Details on what will be subjected to these price controls should be forthcoming in two months.

And it is not like Berdymukhamedov is exactly creating propitious conditions for the emergence of a local Jeff Bezos. Online retailing in Turkmenistan is not starting out from a garage in Dashoguz, but rather appearing by the willing of state diktat. Deputy Prime Minister Chary Gylydzhov submitted his proposals on the matter to Berdymukhamedov during the February 22 Cabinet meeting. Berdymukhamedov insisted the government retain "strict control over the implementation of this system.”

The Turkmenistan-Afghanistan-Pakistan-India, or TAPI, gas pipeline was back on the news agenda with this week’s visit to Ashgabat by Afghan President Ashraf Ghani. Berdymukhamedov pronounced once more that construction should be done at a high tempo, seemingly putting lie to a statement from last February about the Turkmen section of this project already being complete. Some jaded cynics persist in demanding proof that any work on the pipeline has been done at all.

The obfuscation and misleading is perhaps to be expected.

Consider the Ozymandian undertaking to build Altyn Asyr, an artificial lake around 100 kilometers by 20 kilometers in size. The project, which is intended to pool drainage waters flowing away from irrigated fields instead of simply allowing them to trickle away uselessly into the Karakum Desert, has been kicked around since Soviet times. Berdymukhamedov stressed again this week that the project was of "exceptional importance for the whole of Central Asia." Some construction work began with the requisite pomp in 2009, but it does not look like anything happened after the TV camera crews packed away their things. Back in August, Berdymukhamedov had announced that the first stage was finally to be commissioned. This does not seem to have happened yet.

Again with water on the mind, an official delegation was dispatched this week to Alicante in Spain on a fact-finding mission at a local desalination plant. In November, the talk was of some German company or other getting into the business of helping Turkmenistan produce more purified seawater.

Laudable as such efforts might be, it is a striking sight to see such a water-poor nation flaunting a golf course, as happened on February 24, when Berdymukhamedov dropped by for a few strokes.

There was more excitement when Berdymukhamedov performed some vehicular acrobatics at the Interior Ministry’s new racing track. It is not obvious why the ministry should need such a facility, although the president’s penchant for motoring sports means that he will not be complaining. Dressed in a Boston Celtics tracksuit, he tore around the track doing his best Top Gear impersonation. Some of the editing leaves it uncertain, however, whether state broadcasters may have spliced in footage of somebody else driving to make Berdymukhamedov look even better. Vienna-based news outlet Chronicles of Turkmenistan had some fun with its own mashup:

If there is enough money to go around for presidential follies, it is a different matter for the people. Chronicles of Turkmenistan reported on February 25 that a woman died after falling into a coma as a result of injuries sustained during a stampede in Dashoguz on February 8. The alleged cause of the crush was a rush to withdraw funds from a bank ATM on the rare occasion it was actually stocked. A similar incident was reported by the same outlet last May.

Police in Ashgabat have reportedly again begun demanding motorists pay 10,000 manat – a staggering $2,850 at the official exchange rate – to have their cars repainted in line with unwritten rules said to be inspired by Berdymukhamedov’s own dislike of black. Cops have also apparently begun stripping women of their driving licenses on spurious grounds. Azatlyk republished a video, remarkable for its rarity, showing one such woman angrily confronting abashed police officers who had taken away her license.