The scale of the current crisis may be making IFIs rethink their long-standing policy of uncritically relaying Turkmen government data. 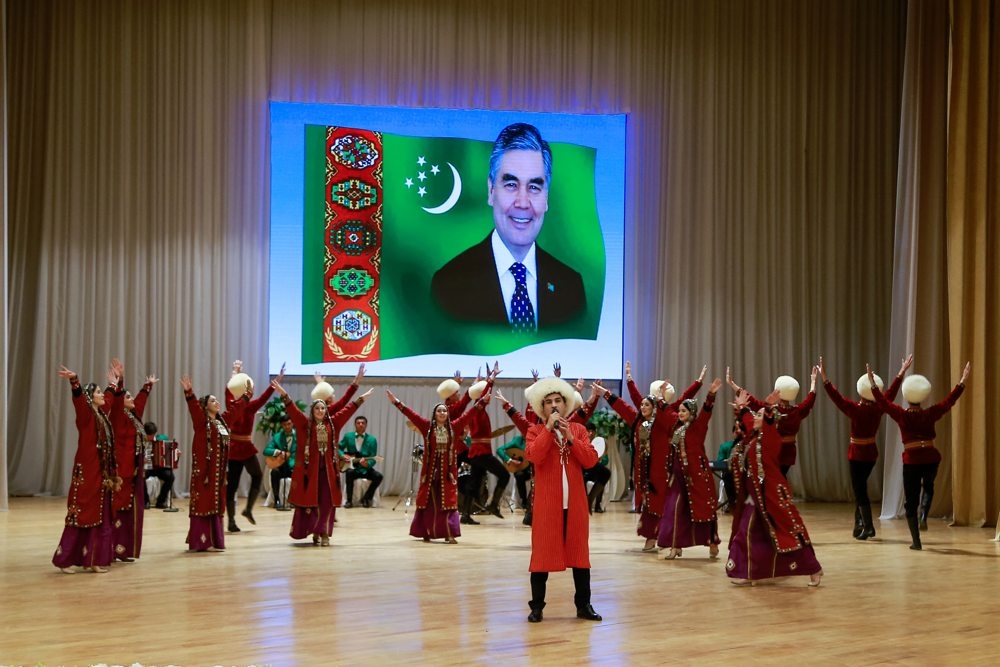 Turkmenistan’s president beamed as he strode into the high-ceilinged halls of Ashgabat’s Rukhiyet Palace to a clatter of rhythmic applause from the attending officials.

It was February 12 and Gurbanguly Berdymukhamedov was set to deliver news of his nation’s latest triumph: economic victory over the COVID-19 storm.

“We have preserved our high pace of growth in the national economy,” he said, speaking from behind a sprawling white desk set against a giant wall-mounted carpet. “Last year, gross domestic product growth was 5.9 percent.”

That was only slightly down from the 6.3 percent growth recorded in 2019. A remarkable feat considering that demand for Turkmenistan’s main commodity, natural gas, plunged for several months and that the country has been largely sealed off from the world for a year.

The scale of the crisis induced by the pandemic may now be making international financial organizations rethink their long-standing policy of uncritically relaying Turkmen government data.

Is this a watershed, however, or will political factors force those organizations to backtrack to the previous dispensation in short order?

Few have been as consistent – partly by dint of its mandate – at validating Turkmenistan’s rosy account of itself as the International Monetary Fund, or IMF.

What happened in 2009 should perhaps have been a warning sign. That year, the global economy contracted by 2.1 percent – the first global recession since economists began calculating GDP.

But Turkmenistan, whose highly undiversified economy is still deeply exposed to global turbulence because of its overweening reliance on energy commodity exports, got a glowing report from the IMF.

“Despite a sizable drop in hydrocarbon production due to lower demand on the external market, real gross domestic product … grew by 6.1 percent,” the IMF said in a late 2010 assessment of economic performance in 2009.

The figure was the exact same as the one produced by the government. And this has been the norm for the IMF. Until now.

Natalia Tamirisa, the IMF mission chief for Turkmenistan, says the fund uses “a wide variety of sources, including the raw data and other information provided by country authorities” when calculating GDP growth.

“IMF staff engages with a broad range of counterparts in Turkmenistan, including, in addition to the government, firms, banks, international financial organizations, and others,” Tamirisa said in an email.

“This is funny. Ninety-nine percent of the banks are state-owned banks,” Myatiev said. “Naturally, they use the same information, the same statistics, the same figures as do all other government and state ministries: the ministry of trade, the Central Bank, the commodity exchange, whatever, you name it.”

The private sector in Turkmenistan is no more promising an area for sourcing independent data.

“There are no large firms in Turkmenistan that would be considered a party that the [international financial institutions] could be consulting with,” Myatiev said.

A shift looks to have occurred in the turmoil produced by COVID-19, however.

In its World Economic Outlook published this month, the IMF has Turkmenistan’s economic growth in 2020 at a meager 0.8 percent. It is unclear what has motivated this stark departure from the official Turkmen line.

A particularly intense paucity of data may be at fault. No IMF team has embarked on a surveillance mission – known in the jargon as an Article IV consultation – to Turkmenistan since November 2019. One scheduled for March 2020 appears not to have happened.

IMF’s peers and other international economic analysis outfits are candid about where the problem lies.

The World Bank told Eurasianet that it relies for much of its analytical work on the sovereign statistics of countries under scrutiny. But when that reliability of that data becomes suspect, the World Bank said, it considers whether or not to continue using it. Turkmenistan has now fallen foul of that standard.

“In the case of Turkmenistan, the World Bank has, as of last year, discontinued inclusion of the country’s GDP data in its global and regional analytical reports, due to lack of reliable official statistics on national accounts,” a spokesperson for the World Bank told Eurasianet by email.

Myatiev argued that this should have happened a long time ago.

“They should have done it, I don’t know, maybe 10 years earlier, because all the data they were using before was absolutely fake,” he said.

The Economist Intelligence Unit, a privately owned research company, is similarly caustic about both Turkmen and IMF data.

By contrast with the IMF, the EIU saw Turkmenistan’s economy shrink by 1.1 percent in 2020.

For scholars of how international financial institutions interact with governments around the world, obsessing over the raw data is to miss the point. With the IMF, publicly published figures are often the product of a process of negotiation with the authorities.

“This is not a technical issue. It is a political issue,” Morten Jerven, an economic historian at the Norwegian University of Life Sciences, told Eurasianet. “In my experience, it is the political closeness between the leadership and the IMF that really determines the outcome, not the accuracy of the numbers.”

Simply put, the IMF may see no upside in rocking the boat by questioning the data, especially with such a cagey and secretive partner. The priority for the IMF, said Jerven, might instead be to ensure that Turkmenistan is in compliance with its recommendations.

The COVID-19 crisis could be a turning point. International institutions producing economic statistics appear to be using the moment for cover to engage in corrective work with Turkmenistan. The regime in Ashgabat, however, has chosen to persist with its boom myth.

In view of that divergence of positions, the dilemma for the likes of the IMF will be whether to snap back to pre-crisis habits or to begin more forcefully highlighting the weaknesses of Turkmen data.

Opting for the former scenario, said Jerven, comes with risks.

“The IMF is running a risk of potentially having reality and negotiated numbers being too distant to each other, so that you would have a food shortage [situation] without knowing about it, like in the case of North Korea.”