With construction on the TAPI pipeline to South Asia delayed, at best, Turkmenistan is looking West. 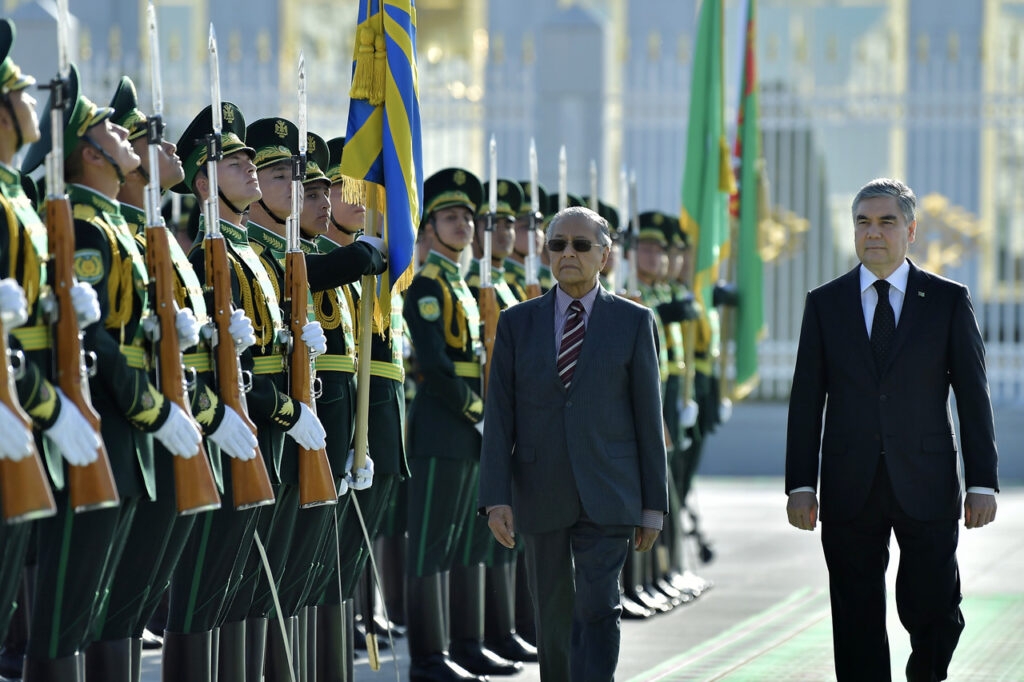 During a visit to Ashgabat, Malaysia’s 94-year-old prime minister, Mahathir Mohamad, voiced interest in getting involved in the Turkmen cotton sector, whose reliance on forced labor has lately made it the object of unwanted international attention. (pmo.gov.my)

The trans-Afghan pipeline project continues to be an object of intense focus, and not necessarily in good ways.

At an October 26 Cabinet meeting, President Gurbanguly Berdymukhamedov droned in generalities about the importance of the Turkmenistan-Afghanistan-Pakistan-India route, describing it once more as a force for regional peace and economic prosperity.

For all that, there has been uncertain progress in construction. Turkmenistan had at one time claimed to have begun building its 214-kilometer section of the roughly 1,800-kilometer pipeline as early as December 2015. In February 2018, the head of the Turkmen company leading the whole project lied preposterously, saying the work was done.

It was not reassuring, in that case, to see Berdymukhamedov wrap up his TAPI talk last week by delivering a severe reprimand to his deputy Prime Minister with the portfolio for the oil and gas sector, Myratgeldi Meredov. The president explicitly noted that this is Meredov’s last chance to quickly address the unspecified “shortcomings allowed in his work.”

Fantasies about progress on TAPI feel little firmer in neighboring Afghanistan, where most of the pipeline will have to be laid. Officials in Herat province, which borders Turkmenistan, let slip last week that land requisitions along the proposed route have only just got underway. Construction had previously been reported to have started in February 2018, which also sounds like somebody was stretching the truth a little.

The Afghans are issuing mixed messages about the final cost of their section. Economy Minister Mustafa Mastoor recently provided a very loose estimate of anywhere between $9 billion and $12 billion, raising the worrying prospect of runaway costs. Afghan news agency Pajhwok, meanwhile, cited a spokesperson for the Mines and Petroleum Ministry in Kabul as saying that a fresh technical survey had enabled project designers to work out a shorter route.

“The primary investment in the project which was $10 billion is now reduced to $8 or $9 billion,” the spokesman, Saihoon Kamgar, was cited as saying.

Visions for westward energy transportation appear to have received more attention at the 24th edition of the Oil and Gas of Turkmenistan conference in Ashgabat, which took place on October 22-23.

Following that event, envoys from the European Commission and the World Bank held talks with an advisor to the president on energy issues (likely Yagshigeldy Kakayev), the finance and economy minister, the heads of local banks and executives from state gas company Turkmengaz.

The European Commission official, Erlendas Grigorovic, had delivered a speech at the conference on the fabled Trans-Caspian Gas Pipeline, or TCGP, so there is no mystery what exactly was discussed. The presence of moneymen at these encounters indicates that conversations may be revolving around the specifics of costing and, just as importantly, who will pay for what.

In his speech, Grigorovic raised the prospect of tapping EU development-oriented trust funds for the purpose of supporting export routes. Grigorovic also reportedly suggested that the services of European companies could be solicited for the work of consulting and conducting environmental evaluations.

The Italians are the first to get into line. Senior energy officials, including the aforementioned Kakayev, will be among the visiting delegation attending the Italian-Turkmen business forum in Milan on November 6. Italy’s commercial interests will be represented by the likes of energy giant Eni, Roma-based export credit agency SACE, and RINA Consulting, a Naples-based company that provides consulting for energy projects.

Berdymukhamedov has of late taken to casting himself in the guise of the concerned environmentalist, evidently in a bid to underplay concerns that TCGP could present a threat to the ecological integrity of the inland sea. It has typically been Russia and Iran that have grumbled on this front, although those ranks were surprisingly bolstered in August by Bulgarian Prime Minister Boyko Borissov, who remarked that the route was unviable for environmental reasons. (Worth noting, however, that the article from the BTA Bulgarian state-funded news agency that relayed those remarks appears to have been scrubbed).

In any event, Berdymukhamedov said on October 25, addressing attendees of a Non-Aligned Movement summit in Baku that his government is lobbying for the creation of a Caspian Sea environmental program. This initiative would “ensure the rational use of the rich natural resources of the Caspian Sea,” he was cited as saying by Azerbaijan’s Trend news agency.

Berdymukhamedov is doing a lot of travelling these days by his normal sluggish standards, but he is also hosting a fair amount too. On October 27, Malaysia’s 94-year-old prime minister, Mahathir Mohamad, flew into Ashgabat for convivial talks.

Malaysia’s Petronas is a veteran on Turkmenistan’s energy scene. In 1996, it secured a 32-year production-sharing agreement to develop an offshore hydrocarbon bloc in the Caspian. The Malaysian leader said Ashgabat had agreed to extend that contract by an additional 10 years, to 2038. Mahathir said that this represented a signal to him that Petronas may stand to win other energy concessions in Turkmenistan.

The tenor of Mahathir’s remarks must have been music to Berdymukhamedov’s ears. Talking about prospects for future cooperation, he voiced interest in getting involved in the Turkmen cotton sector, whose reliance on forced labor has lately made it the object of unwanted international attention. Mahathir then suggested that Turkmenistan might want to send more students to Malaysia, since they “would not be exposed to the wrong kind of culture, like in some other countries.”

Not that Turkmen authorities fail to fear that their young people are already being exposed to malign influences close to home. RFE/RL has reported that female students in Mary province aged 14 and over are being made to undergo mandatory gynecological examinations. Parents have told the broadcaster that they have been informed that the policy was put in place to uphold moral behavior and prevent teen pregnancies.

Also, if you are an ambitious young Turkmen person and want to study abroad, fine, but do not overdo it.

Vienna-based Chronicles of Turkmenistan has reported on new restrictions on money transfers to Turkmen students abroad. Payments may be made onto the Visa cards of people working on their first degree, but graduates doing further studies are barred from receiving money in the same way.

The explanation volunteered by Chronicles is that young people have in recent years increasingly sought to remain overseas, seeing few opportunities back in their home country. And since money that is sent abroad is converted at the official exchange rate, which is around five times lower than the black-market rate, Turkmen banks are feeling the pinch.