In a rare nod to reality, Turkmenistan’s strongman hints at austerity. 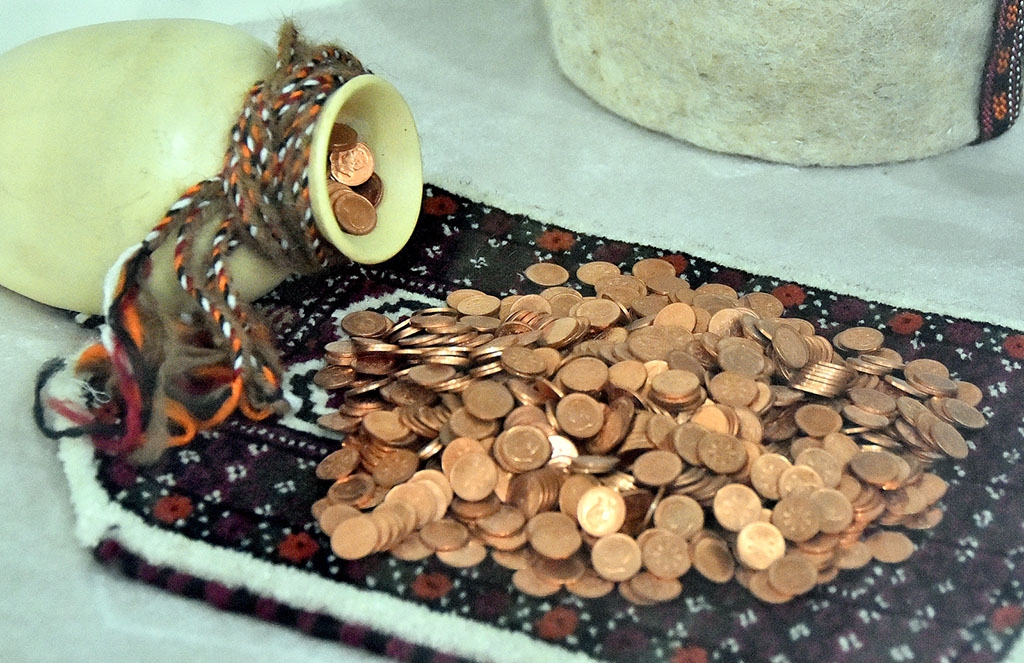 A penny saved is a penny earned by regime cronies. (state media)

It is a sobering day in Turkmenistan when the president starts urging his underlings to think about reality.

But Gurbanguly Berdymukhamedov did just that at the September 18 Cabinet meeting, when he called on Deputy Prime Minister Gadyrgeldy Mushshikov to prepare an economic forecast for the rest of this year and 2021.

Although the president spoke only in generalities, it is evident from his remarks that more austerity is looming.

“According to forecasts by leading global economic and financial experts, next year is expected to be as difficult for the economy as this one,” he was quoted as saying by TDH state news agency.

Berdymukhamedov then urged a review of the 2021 budget. But TDH’s Cabinet meeting report was careful to quickly follow that line with one stating that the government was still committed to hiking salaries, pensions, benefit payments and student stipends.

By twist of happenstance, September 18 also marked the latest round of consultations between Turkmen economic officials and the International Monetary Fund – likely the very same “leading international experts” spooking Berdymukhamedov. Only a Turkmen readout of these talks is as yet available. By getting its version out first, Turkmen state news is able to say that IMF recommendations for further economic growth are “in line with the agenda set by the president of Turkmenistan.”

The IMF is typically content to yield itself up as a fig-leaf for the Turkmen government, but perhaps not quite to that extent. After consultations in November, the fund trotted out familiar lines about the overvaluation of the manat, the need to open the economy to more competition, and the benefits of phasing out unproductive directed cheap credit. Not to speak of more transparency. Translated into human, this means less shoveling the people’s money at corrupt cronies to build inefficient enterprises and more giving honest entrepreneurs a bit of breathing space to turn a profit and trade with the outside world.

Under Berdymukhamedov, that is obviously a non-starter, reality notwithstanding. The one bit of recurrent IMF advice that the president is prepared to humor, however, is all the talk of a transition to a market-based system. This is why there is frequent talk of privatizing this and that. At this last Cabinet meeting, it was proposed that the State Commodity and Raw Materials Exchange, which is the market where foreign companies come to buy Turkmen raw exports, could be turned into a joint-stock company. Earlier this month, Berdymukhamedov ordered that Halkbank savings and pensions lender likewise be converted into an open joint-stock company.

“The requirement of these times,” to quote the expression used by Myratgeldy Meredov, the deputy prime minister with the portfolio for the oil and gas industry, is to reform household gas deliveries. Meredov did not spell out what he meant by this, but an educated surmise would be that households are not paying enough or in a sufficiently timely manner for their gas. It was only in 2017 that Berdymukhamedov pulled the trigger on ending decades of free utilities like gas, water and electricity in an openly declared agenda to rid the people of dependency on the state. Gas meters began to be installed the following year, although not especially well, apparently. Leaking pipes have on occasion led to homes blowing up. Berdymukhamedov made a veiled allusion to likely tariff hikes by talking of the need for the “efficient and rational use of … hydrocarbon resources.”

On the subject of rational use of resources, the president inquired during a September 14 video conference call with regional leaders what progress was being made on the giant yurt-shaped buildings that are to serve as provincial concert halls. Berdymukhamedov gave the order to build the 3,000-seater venues in the Balkan, Dashoguz and Lebap regions in November 2018. It is not known how much these buildings will cost to complete.

Even the blinkered Turkmen leadership understands that this skew-whiff priority-setting perennially risks fostering ill will, and this explains the intensity of the repressive machinery. Berdymukhamedov is frustrated he cannot find the right staff to do this repressing, however. This week, he delivered a severe reprimand to Interior Minister Mammetkhan Chakiyev, who has been in the job since October 2019, for unspecified shortcomings.

Another official, Maksat Khudaykuliyev, the head of the State Customs Service, got the same hairdryer treatment.

The biographies of these two intersect in a significant manner and may explain what is at this root of this particular tantrum. Chakiyev was the first head of the anti-corruption service set up in June 2017, a post he took after having led the customs service. Khudaykuliyev took over the helm at the anti-corruption body in April 2018, before then moving on to replace serial reprimand recipient Atadurdy Osmanov as head of customs in August 2019.

It would be naïve, however, to imagine that these two officials were put in charge of running such profoundly lucrative ministries because the president is seriously intent on rooting out corruption. All government departments have, in addition to their regular operating budgets, discretionary funds for extracurriculars. This explains how it is that various government bodies own Akhal-Teke horses that compete at races. Ministries operate like miniature fiefdoms, enriching their higher echelons, and this is permitted to happen on the understanding and expectation that money circulate up the food chain. It stands to reason that in lean times, this flow is inclined to become sluggish and that officials and parastatal businesspeople need spurring on.

On the foreign front, Turkmenistan has been on the end of irked remarks from Russia, which has expressed unhappiness with how Russian-language classes are reportedly being discontinued at a number of Ashgabat schools. Moscow says that this violates the spirit of a 2002 Friendship and Cooperation Treaty that envisioned the promotion of the Russian language in Turkmenistan. The silence of the Turkmen Foreign Ministry, which is normally not slow in responding to what it deems to be inaccurate reporting, is damning.

The Turkmenistan-Afghanistan-Pakistan-India, or TAPI, natural gas pipeline persists in cropping up in state news headlines. Berdymukhamedov on September 18 got on the phone with Pakistan’s President Arif Alvi to bring him up to speed on the project – specifically, to tell him that work on the Turkmen section is in its final stage. (This is a veritable Zeno’s paradox of a pipeline, incidentally – its imminent or actual completion has been promised repeatedly over the years.)

The real sticking point for partners has been the price, however. Karachi-based The News International reported that there was important progress on that this week, when Muhammetmyrat Amanov, chief executive of the TAPI Pipeline Limited Corporation, promised Pakistani officials during a visit to Islamabad that Turkmenistan was prepared to lower the asking price for its gas. The newspaper also quoted officials in the Turkmen delegation as saying they had made progress in their talks with international lending agencies. Turkmenistan is known to have loan pledges from the Asian Development Bank and the Saudi government, but these fall far short of the $10 billion that it is estimated the whole project could cost to complete.