Turkmenistan is risking a reputation as a sanctions-buster. Our weekly briefing. 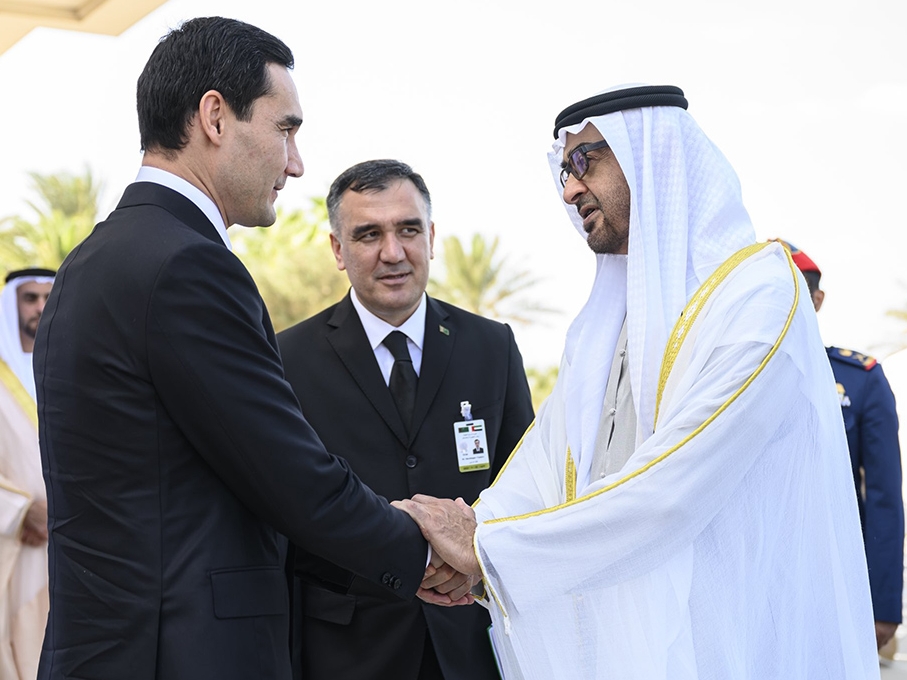 A Chinese government delegation headed by Beijing’s special envoy for Afghanistan, Yue Xiaoyong, was in Turkmenistan on November 14 for talks on the fate of the war-torn country.

Marshaling the energies of Afghanistan’s neighbors toward a collective approach on mitigating Afghan tribulations has been a core component of China’s strategy following the Taliban’s seizure of power. Turkmenistan has been especially receptive to this model and routinely champions the virtue of dialogue with the Taliban regime, as it did in the exchange with Yue.

“Turkmenistan stands for the development of dialogue with the new authorities of Afghanistan as the leading factor contributing to stability and bringing closer the prospect of internal harmony and balancing interests within Afghanistan,” the Foreign Ministry in Ashgabat said in a statement.

What is more, what could be more useful in promoting peace in Afghanistan than “implementation of major infrastructure projects?” Turkmen officials like to note.

This was yet another sales pitch, naturally, for the trans-Afghan gas pipeline, known as TAPI for short. But where is the money? Turkmenistan habitually demurs when it comes to punting up its own cash for a project that, were it ever to be completed successfully, would mainly accrue returns in its direction. At the foreign ministers meeting in China that kickstarted the Tunxi Initiative of Afghanistan’s neighbors in April, Turkmenistan was assigned only the job of “promoting implementation” of TAPI, but not necessarily paying for it.

This awkward money question came up again last week, when Pakistan’s Energy Minister Musadik Malik spoke about TAPI at a November 17 conference in Islamabad. While insisting the project is on track, Malik noted that it would take between three and four years to complete once funding issues were resolved. A report on Malik’s talk by Lahore-based outlet The Nation did not dwell on whether the minister, who visited Turkmenistan in September, seemed to think the funding issue was anywhere being closed.

But a detail mentioned by Malik pointed to an intriguing, literal, change of direction for TAPI. The pipeline, the minister said, may be branched off to the port city of Gwadar, which lies many hundreds of kilometers off TAPI’s intended route.

There is always a vague sense that Ashgabat wants to drum up Persian Gulf interest in committing to energy sector investments. In more confirmation of that, Turkmen President Serdar Berdymukhamedov was in the United Arab Emirates for a two-day visit starting on November 21. The trip was concluded with the inevitable signing of documents pledging cooperation, including on agriculture, environmental protection, cybersecurity, education and finance. One firm upshot is that Turkmenistan and the UAE will jointly create a bank, presumably as a vehicle for facilitating funding for industrial projects.

If anything firmer than lofty, but airy, talk of future cooperation was produced by Berdymukhamedov’s trip, however, none of it has been reported.

The long-awaited Azerbaijan-Turkey-Turkmenistan heads of summit is poised to happen at some point in early December, although the way the news is being filtered out to the world is typically confounding. The most recent indication of its imminence arrived when the former president (father of the current incumbent and speaker of the Senate), Gurbanguly Berdymukhamedov, talked about it during a November 18 meeting in Ashgabat with the speaker of the Grand National Assembly of Turkey, Mustafa Şentop.

Although the oft-delayed summit has long been trailed as one of great potential import, the areas for dialogue are not especially broad. Energy transportation remains the single overriding theme. Şentop addressed this topic by once again talking about Turkey’s readiness to serve as host for a physical hub for the transportation of natural gas from Turkey to Europe. Advancing progress on this idea, which has only recently begun to take form, will likely be a central agenda point of the upcoming summit.

While haltingly cultivating that Westward route, Turkmenistan is keeping other coals in the fire. On November 16, President Berdymukhamedov received Iran’s Petroleum Minister Javad Owji for talks.

Official Turkmen statements were characteristically information-free about the meeting, but there is a good chance this was to do with the November 2021 deal under which Turkmenistan supplies Iran with around 1.5 and 2 billion cubic meters of gas annually and Iran then separately delivers an equivalent amount of gas to Azerbaijan. Owji in June reportedly stated that Turkmenistan was interested in increasing those volumes.

Turkmenistan is seriously risking developing a reputation as a sanctions-buster. Amsterdam-based Turkmen News observantly picked up on another strand of this when it relayed news of the U.S. Navy intercepting a fishing vessel in the Gulf of Oman smuggling a large quantity of explosive material from Iran to Yemen, presumably to be supplied to Houthi rebels. The U.S. Naval Forces Central Command public affairs office did not point this out, so it took Turkmen News to note from pictures accompanying the official statement that the intercepted nitrogen was contained in sacks with the words “Made in Turkmenistan” on them.

“Evidently the Turkmens sold the Iranians nitrogen for cash,” an unidentified correspondent told Turkmen News. “Bank transfers are not possible because of the sanctions.”

The Berdymukhamedov family is something of a black box, but Turkmen News has provided a tantalizing peek into some of its internal dramas.

The website reported on November 22 that an entirely unknown figure called Rakhimberdy Ishanguliyev was dismissed as deputy general of Turkmenistan Airlines, the state-owned carrier, at the end of October. It turns out that he is loosely related to President Berdymukhamedov: his mother-in-law is the sister of the former president, the current incumbent’s father.

Why Ishanguliyev was fired is not known, but it feels like that whole section of the family may be in the regime’s bad graces.

In June, Turkmen News reported that Ishanguliyev’s mother-in-law, Gulnabad Dovletova (the president’s aunt), had resigned as head of the local branch of the International Red Cross and the Red Crescent Society, apparently at President Berdymukhamedov’s behest. The website’s sources claimed that Dovletova had turned her charitable charges into “troughs,” exploiting the organizations’ charitable status to import goods without paying duty.

There was yet more drama in September, when a waiter working at an Ashgabat restaurant owned by another of Dovletova’s sons-in-law attacked three people with a knife, killing two of them in the process, while under the influence of drugs or alcohol. The restaurant where the incident occurred was later closed and even razed to the ground, Turkmen News reported.