Turkmenistan: Fast and furious. And broke 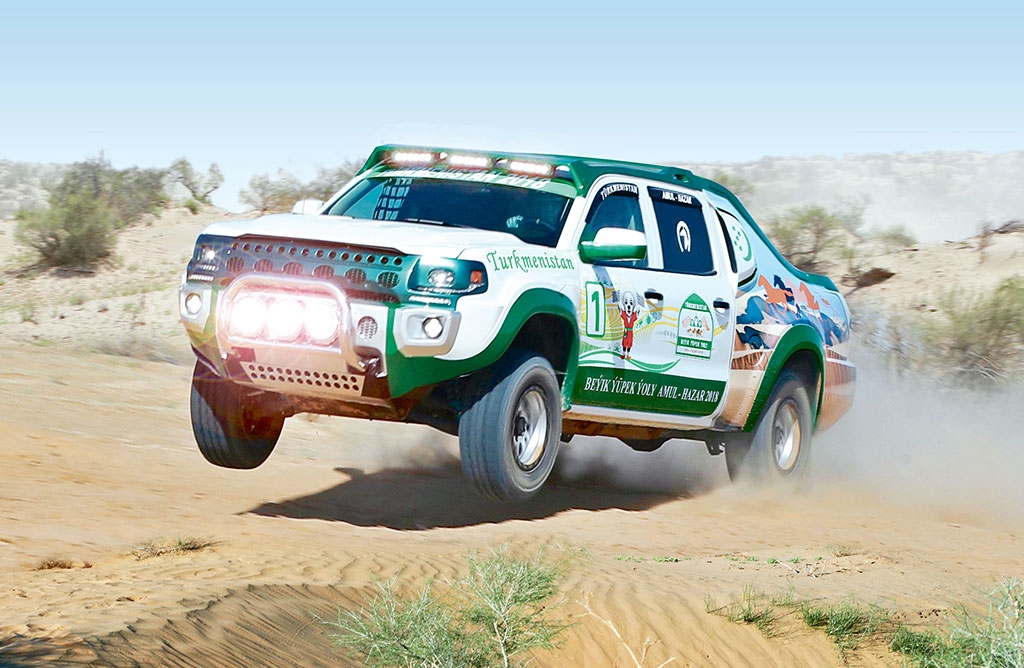 Readers of the habitually tedious Neutral Turkmenistan newspaper were greeted with an initially candid-seeming op-ed last week. Is the country facing challenges? the unsigned author asks rhetorically. Why, yes it is. And is there a solution? Yes, there is: President Gurbanguly Berdymukhamedov.

“As is well-known, the president pays unremitting attention to (Turkmenistan’s) issues and, as a result, our country is successfully implementing environment and national programs transforming the Fatherland into a blooming garden,” the writer concludes.

This oasis of plenitude is not, however, for prying eyes to see.

As a reminder, there was alarming news of a fresh assault on one of the handful of brave journalists still doing her job in the country. On May 9, RFE/RL correspondent Soltan Achilova was detained by police near Ashgabat’s Eternal Flame, the monument to honor the heroes of World War II. Achilova was held and threatened for two hours, while police officers reportedly demanded she give up working for the U.S.-funded broadcaster.

In a testimony to the UN Human Rights Council only two days prior to that incident, Deputy Foreign Minister Vepa Hadjiyev shamelessly argued that the very fact that RFE/RL correspondents are still working in Turkmenistan is ample proof that the country upholds media freedoms.

The reality is that the only news coverage permitted must contribute to the teetering edifice of preposterousness that is Berdymukhamedov’s ever-evolving public image. One moment he is the conscientious gardener — imagery borrowed directly from high Stalinism — and the next he is, somewhat incongruously, a road-ripping rally-car racer.

No interminable, solemn Victory Day memorializing for Berdymukhamedov. The highlight of his week was when he offered an impromptu demonstration to drivers taking part in the Amul-Khazar 2018 rally and duly posted the fastest time in one of the competition’s challenges. Foreign-based news website Chronicles of Turkmenistan reposted official video footage of the feat that suspiciously shows Berdymukhamedov in two different cars, raising the question of whether he took part in more than one event or if some camera-trickery was involved. As if they had nothing better to write about, state media bragged about Berdymukhamedov’s drifting skills – a fact admittedly attested to by footage of the president performing donuts.

Done with the circus, government-loyal media turned to bread, of which they insist there is an abundance. SNG Today, a regional affairs website whose affiliation is unclear but that features much rose-tinted news from Turkmenistan, reported that the country’s import-substitution program – a core pillar of Berdymukhamedov’s economic vision – is proceeding swimmingly.

Slightly undermining that picture, Berdymukhamedov has just fired the deputy head of state fertilizer manufacturer Turkmenkhimiya, whose product is presumably integral to the hoped-for success of the agricultural sector. Company chief Nyazly Nyazlyev got away with just a reprimand.

And RFE/RL’s Turkmen service, Azathabar, has reported that the price of flour in Ashgabat has risen to 6.5 manats per kilogram, compared to 5 manats just 10 days prior. Azathabar also reminds readers that most flour sold to Turkmens actually hails from Kazakhstan, rather than Turkmenistan’s supposedly abundant gardens.

For those wondering what a manat is even worth – that’s a good question.

Azathabar noted on May 11 that the black market rate for the dollar has been sliding upward yet again. Two weeks ago, it was 16.5 manats to the greenback. Azathabar now puts it at 18 manats. One report from Dashoguz province put it at 19 manats.  SNG Today, which avoids any such reporting, revealed that the government is developing a new system for electronic payments. Similar efforts to de-monetize the economy in slightly less authoritarian Uzbekistan next door have regularly ended in failure.

The ailments of the manat cannot be disentangled from the rampant corruption and the elite's suffocating control over the economy. Exile-run outlet Alternative News of Turkmenistan on May 9 reported a few examples of such corruption in the Interior Ministry. Its strongest criticism was reserved for Merdan Gurbanov, police chief of Garabogaz, a town on the Caspian Sea, who the website claimed rules over the community like a fief and even allegedly drove a young soldier to suicide by cooking up rape charges against him in an attempt to extort his family.

As ever in Turkmenistan, such incendiary allegations cannot be independently verified.

As the government grasps for potentially useful outside economic help, Foreign Minister Rashid Meredov embarked on a two-day trip to Iran that the Turkmen State News Agency, or TDH, described as an opportunity to discuss “priority areas of Turkmen-Iranian cooperation.”

There really is only one priority area in bilateral cooperation, and that is how Tehran can help Ashgabat gets its natural gas riches to the outside world. Turkmen media was silent on the outcome of this trip, but Iran's government media quoted Foreign Minister Mohammad Javad Zarif as saying there were "no limitations in developing ties with Turkmenistan.” Iranian Parliamentary Speaker Ali Larijani spoke of deepening ties as well. In fact though, all that can safely be said is that there are vaguely defined plans to reduce the cost of transportation transit between the two nations. Not quite enough to set the world alight.

Another hazy mirage of a lifeline was dangled by Lubomir Frebort, head of the EU's liaison office in Ashgabat, who was cited by Turkmen media as saying that Brussels remains committed to the long-dormant Trans-Caspian gas pipeline project. Whatever hopes there are for that fantastical project received another dent from Azerbaijan's deputy foreign minister, who warned that the next summit on the status of the Caspian Sea, which had previously been scheduled to take place in Astana in late May, may be postponed beyond 2018. There had been much excited chatter earlier this year that a definitive agreement on the Caspian’s status – a necessary precondition before any pipeline can go ahead – among the five littoral nations was imminent.

Turkmenistan has trouble getting its gas out and it is not making it easy for energy investors to remain in. Alternative News of Turkmenistan reported on May 7 that officials searched the Ashgabat offices of Malaysia's Petronas, one of the very few foreign investors prepared to brave the climate. The company was reportedly fined more than $20 million.