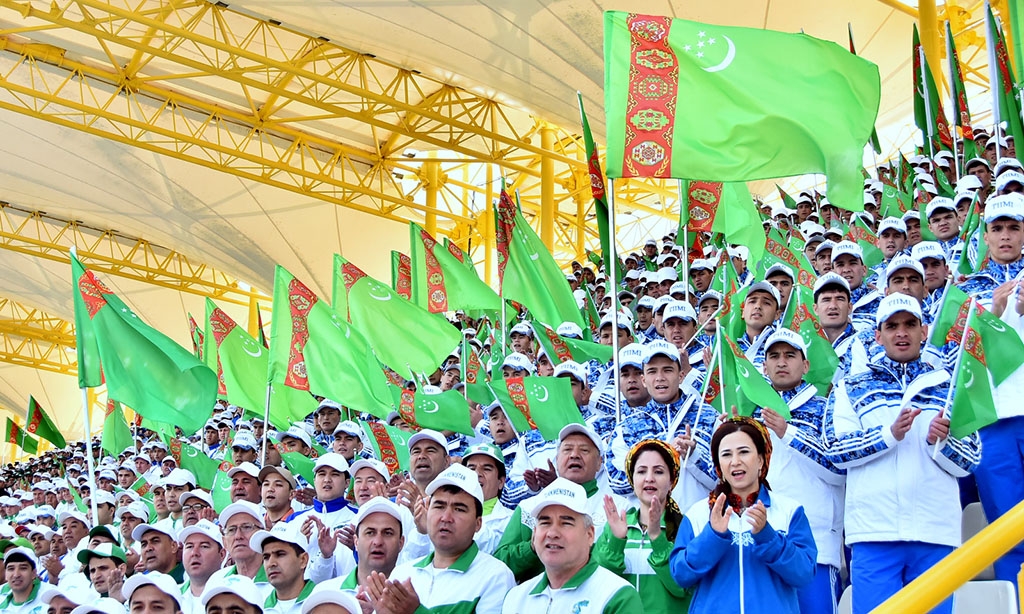 Horse Day crowding was not a problem, the government might argue, because Turkmenistan has no confirmed cases of the coronavirus. (state media)

Normal life stopped for a moment this weekend as Turkmenistan celebrated a holiday devoted to the Akhal-Teke.

The breed, described in the Encyclopedia of the Horse as a “distinctive, wiry horse, which has a long, thin neck set very high and carried almost vertically to the body,” is an object of immense pride and has constituted the focus of a concerted national consciousness-building exercise.

Devotion to the horse is coming at no small cost either. As President Gurbanguly Berdymukhamedov revealed this week, $680 million has been earmarked for “improving the social living conditions of our horse-breeders.” That is $120 from every man, woman and child in a country where average monthly salaries are said to hover around $400.

Celebrations for Horse Day on April 26 involved a now-familiar host of activities at the Equestrian Sports Complex outside the capital, Ashgabat.

Cash prizes worth a total of $150,000 were paid out to the winners of seven races. Four of the winning horses came from the president’s own Akhal-Teke equestrian complex. All of the victorious steeds were owned by government entities in fact. There was the Agriculture Ministry’s Kopetdag, Gujurly of the General Prosecutor's Office and the oil and gas complex’s bay champion Dorburgut. Quite how much this all costs the state coffers can only be guessed.

And the reported performances, incidentally, were quite remarkable. Kopetdag completed the nine-furlong (or 1 1/8 mile) race in a time of 1 minute and 44.2 seconds, which is just a smidge faster than the current North American record for that distance – a time that itself eclipsed a 15-year record held by the legendary Secretariat.

All of which is to say that this that the Horse Day holiday embodies two activities greatly favored by the Turkmen state: definitely wasting money and probably fudging facts.

Celebrations for the holiday required crowding hundreds, if not thousands, of people close to one another in the closed confines of a hippodrome, very much in contravention of the social distancing guidelines laid out by global health experts during the ongoing COVID-19 pandemic. But this is not a problem, the government might argue, because Turkmenistan has no confirmed cases of the coronavirus.

Foreign Minister Rashid Meredov told UN officials on April 22 that “if there was a single confirmed coronavirus case, we would have immediately informed ... the World Healthcare Organization in line with our obligations.” Hans Kluge, the WHO’s regional director for Europe, announced a day later that a technical team is to be sent to Turkmenistan as part of his organization’s COVID-19, although how much access that mission will get is uncertain.

Coronavirus is at least getting more high-level attention.

According to a readout from the Foreign Ministry, Berdymukhamedov discussed the pandemic in a phone call with UN Secretary-General Antonio Guterres on April 22. Berdymukhamedov reportedly described coronavirus as a "new, extremely serious challenge that has encompassed vast geographical spaces across the planet and is changing the familiar life of many states and peoples.”

Even in coronavirus-free Turkmenistan, albeit in typically arbitrary ways. Some measures are familiar from other countries: travel in and out of the country has been halted and there have been some showy efforts to disinfect public spaces. Police have reportedly spent recent days enforcing social distancing in piecemeal fashion across Ashgabat by blaring at idling cars from loudspeakers, keeping children out of school, and ordering passersby not to talk too close to windows. Parks have also been shuttered, but the measures went even further in Lebap province, where officials have reportedly banned fishing in the Amu Darya River or even to use water from connected reservoirs.

State media reports on the conversation between Berdymukhamedov and Guterres cast it in the quality of a routine exchange between two peers on the global scene, but it is difficult to shake the impression that the UN is spooked by Turkmenistan’s laidback attitude. The call precipitated a meeting on April 27 between Meredov and all the representatives of UN organizations in Ashgabat. According to the Foreign Ministry statement on this meeting, “UN representatives … praised the actions of Turkmenistan’s government” as well as “the openness of the country and its commitment to establishing international mechanisms in the field of health, food security, and transport.”

Ashgabat's financial fact-fudging will have implications for this unfolding crisis. As RFE/RL’s resident Central Asia whitebeard Bruce Pannier noted, the government's average wage claims and refusal to officially devalue the manat means it is classified by the World Bank as a middle-income country. As a result, it does not qualify for the European Union’s plan to provide cash to help vulnerable countries cope with the impact of coronavirus.

RFE/RL’s Turkmen service, Radio Azatlyk, reported on April 27 that shortages of flour in the Lebap province have compelled residents to take to grinding corn to produce a substitute. “In most state-owned stores, it has for several weeks become impossible to find cheap bread and flour,” an Azatlyk correspondent reported on April 24. Salaries are so low in some regions that state stores are the only viable way to obtain staple goods. Imported fruit and other products have reportedly appeared in Ashgabat's markets, however, albeit at significantly inflated prices.

What little reliable clues outsiders have at their disposal hint at a bleak macroeconomic picture. Chinese custom’s data for January-February showed imports from Turkmenistan dropping by 17 percent year-on-year. Customs figures for March alone showed a 20.6 percent fall. This is indisputably accounted for by falling demand for Turkmenistan’s most valuable export commodity: natural gas. Ninety percent of Turkmenistan’s total exports are hydrocarbons, which is an alarming figure in an era of low energy commodity prices.

The government is at least in sustained dialogue with international partners on the economic front. On April 23, representatives of the Foreign Ministry and the Central Bank got on an International Monetary Fund-led online meeting together with other Central Asian and Caucasian countries. State media reported on April 23 on a phone call between representatives of the State Bank for Foreign Economic Affairs, better known as Turkmenvnesheconombank, and Germany's Commerzbank. A day earlier, a similar discussion was held between representatives from the bank and Japan's Bank for International Cooperation, which has together with Tokyo's state trade insurance agency NEXI, supported significant investment into Turkmenistan in recent years.

Staff at Turkmenvnesheconombank have, incidentally, reportedly come under investigation on suspicion of circumventing restrictions on cash withdrawals abroad. The steep difference between black and official exchange rates means there are good profits to be made from cashing out manat savings in the form of hard currency while overseas.