This week in our Turkmenistan bulletin: Ashgabat and Moscow suddenly ratify an aged security agreement. Plus budgets, boasts and bribes. 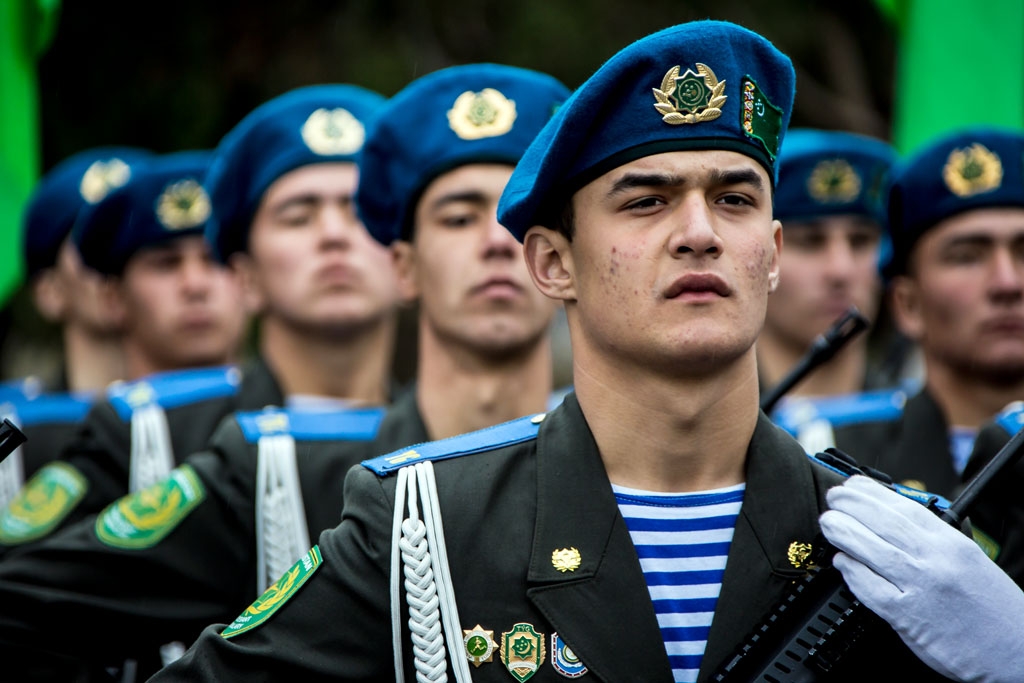 After a 17-year wait, Turkmenistan and Russia are signing the dotted line on a joint security cooperation agreement.

Lawmakers in Turkmenistan ratified the agreement on October 24. Their colleagues in Moscow did the same three days earlier.

Why such briskness and coordination for a document drafted way back in April 2003?

The pact alludes in general terms to cooperation in counteracting terrorism, organized crime, drug trafficking, money-laundering, smuggling and other security-related items. It is helpful to think, though, about the context in which that original agreement was hatched.

In November 2002, then-President Saparmurat Niyazov was targeted with a purported assassination attempt. With Niyazov already deep into the bizzarro, personality cult-inflected and paranoia-tinged stage of his rule, this act of sedition only served to further spook the country’s leadership.

Russia was viewed then, as now, with a blend of circumspection and resignation: The former colonial overlord was bound to meddle, but there are no other viable options for a deeply secretive and authoritarian state. Turkmenistan’s vaunted adoption of neutrality status makes joining any multilateral military bloc a non-starter.

In August, RFE/RL’s resident Central Asia expert Bruce Pannier speculated that the urgency to dust off the agreement might have been occasioned by the worsening economic situation. Pannier pointed to political uncertainty in Belarus as evidence of the kind of popular discontent possibly unnerving Ashgabat. The unrest that has roiled Kyrgyzstan this month will only fuel apprehensions further.

Quite what this cooperation means in practical terms is not clear for now. RFE/RL has reported before, however, on how Russian troops have allegedly already been providing direct assistance in protecting the 744-kilometer border with Afghanistan. Russian security officials enjoy intermittently spooking their Central Asian colleagues by warning of imminent incursions from thousands of militants. More direct military-to-military dialogue may soon ensue.

What really worries the elite are Turkmen citizens themselves, though. And Russia may be able to help there too.

In October 2019, Turkmen President Gurbanguly Berdymukhamedov and Russian President Vladimir Putin pledged to join forces to stem the “illegal collection and use of personal data, which is a direct violation of fundamental freedoms and human rights.” The human rights language is obviously laughably disingenuous from this pair. This passage more likely alludes to putting national internet networks outside the reach of prying Western eyes, while at the same time keeping the eyes of curious citizens away from seditious content. Ashgabat is certain to be enticed by what Moscow terms the “sovereign internet,” a concept modeled in turn on the Great Firewall of China.

Turkmenistan already has a proven track record of trying to snoop on its own people. It has been alleged in the past that German cybersecurity company Rohde & Schwarz is under contract to aid the government in snooping on users and blocking websites. Unscrupulous Western tech companies are happy to assist such activities in return for a financial consideration.

These are tough times after all.

Cracking the numbers, Vienna-based Chronicles of Turkmenistan found that the manat-denominated state budget approved by parliament for next year is 6 percent smaller in monetary terms than the one adopted for 2020. And it is a whole 23 percent smaller than the 2017 budget, the website found.

A state news agency report notes that more than 70 percent of expenditures will be directed toward “social development,” by which it means education, healthcare, culture, welfare and the maintenance of utility services.

That notwithstanding, there is little sugar-coating things. Speaking with a gathering of economic bloc officials on October 21, Berdymukhamedov talked about a “fundamental transformation of financial and economic spheres” and sustainable growth across all industries. Mantras about the full use of productive capacity, the reduction of “inappropriate costs,” and concentration on profit-yielding activities will be heard ever more often.

Returning to a theme of which he never tires, the president demanded particular attention be paid to import-substitution and broadening support for local entrepreneurs, particularly those only just starting out. Berdymukhamedov said plans to implement those objectives include attracting credit from foreign banks and major international financial institutions.

This is already happening to some extent. The European Bank for Reconstruction and Development, for example, has 59 million euros ($70 million) worth of ongoing investments in the private sector in Turkmenistan. Only this month, the bank was flagging up the support it has been giving to Ak Hunji, a polystyrene-manufacturing company that has achieved 90 percent of market share and, in line with Berdymukhamedov’s wishes, almost nullified the need for imports.

Russia looks like an exception in the import-minimizing mission. RIA Novosti news agency last week cited Russian Deputy Foreign Minister Andrei Rudenko as saying that bilateral trade turnover may exceed $1 billion in 2020, up from $700 million in 2019. A remarkable achievement in a difficult year.

The import-substitution agenda is doing little to ease the food situation, despite protestations to the contrary from officials claiming great strides forward.

In what should be troubling sign, the president on October 22 expressly demanded that officials ensure that bazaars be filled to capacity with affordable staple goods. It does not seem likely he would feel the need to issue such instructions were there not a problem in the first place.

Berdymukhamedov was told in response that more land will be set aside next year for growing potatoes and other vegetables. The head of the Union of Industrialists and Entrepreneurs of Turkmenistan, Dovran Khudaiberdyev, cited figures for the first nine months of 2020 to claim that agricultural and food production was already up by 31.2 percent year on year.

The report published in September by Human Rights Watch and the Turkmenistan Initiative for Human Rights obviously throws strong suspicion over the reliability of such boasts. The research was based on the testimony of multiple people speaking of how families are having to cut back on how much they eat and spend more on food because of an economic crisis now worsened by the COVID-19 pandemic.

The government continues to deny it has registered any cases of coronavirus, but RFE/RL’s Turkmen service, Radio Azatlyk, has cited unnamed sources saying that the authorities are contemplating enforcing a total lockdown from the start of November. The alarm has been sparked by a reportedly major outbreak at a women’s prison in the northern Dashoguz province. Lockdown would imply even more robust measures than those now in place, including the suspension of internal flights, the halting of movements between provinces and limiting how much people are able to leave their homes.

Still, every cloud, if that is the appropriate expression. Amsterdam-based Turkmen.news reported on October 21 that the economic depression caused by the unacknowledged coronavirus crisis has in some places significantly pushed down the cost of a bribe for evading mandatory military service. The website’s sources in the Lebap province said that whereas a six-month deferral formerly cost about $220, the kickback is now somewhere in the $90-130 range.

“People are banking on the likelihood that their sons will manage to find work in this half-year, and that they can cover the cost of this small bribe,” the website’s unidentified respondent said. “There is also hope that by the time of the spring levy, the borders will be opened again and that young people can go abroad to work or study.”