Cotton quotas, measuring COVID mortality from space, and the dauphin takes on the economy. This and more in our weekly Turkmenistan briefing. 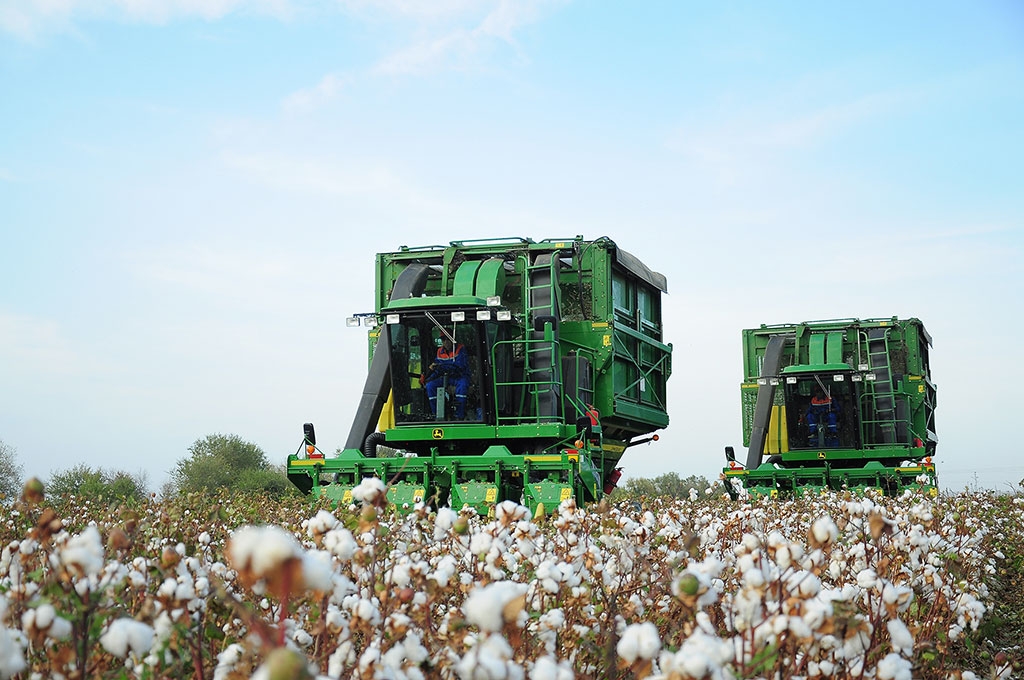 The valuable stuff is picked by hand, but that means forced labor. (state media)

This year’s cotton harvest began with the usual pomp and ritual, but what farmers are being asked to do is quite out of the ordinary.

Picking began across four provinces on September 8: Ahal, Balkan, Lebap and Mary. There will be a one-week delay for the start in Dashoguz province, where soil and climatic conditions are different.

“The main task of village workers now is to collect [the cotton] from the fields in a short time and without losses,” state media declared.

The phrase “short time” is crucial here. President Gurbanguly Berdymukhamedov issued instructions on August 2 for the annual cotton quota to be hit by September 27, the date on which Independence Day is celebrated. Announcements on the competition of work have in the past been made around the start of November.

And there is no suggestion these shortened times will allow for slacking off. This year’s quota has been set at 1.25 million tons (like last year), with most of it coming from Mary and Lebap provinces: 365,000 tons and 320,000 tons, respectively. Even Dashoguz province is supposed to yield 275,000 tons – and within 12 days at that.

State television pictures documenting the start to work in Ahal placed much emphasis on the technology being used to do the work. Fully 1,000 John Deere 9970 cotton pickers are being deployed, along with more than 2,200 trucks, 2,300 tractors and 3,600 tractor trailers.

John Deere have been doing good business out of Turkmenistan’s apparent turn to mechanization. It supplied 600 models of its 9970 picker to Turkmenistan in 2019-20. The company delivered another 400 units of the same machine in 2017-18.

The government has also talked up its bespoke varieties of cotton, which they say have been developed for the region to ensure early maturity and high productivity. 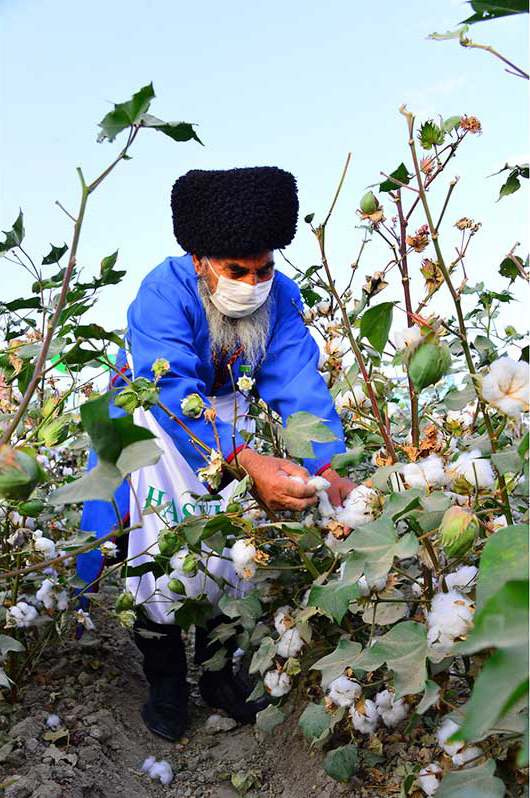 But technology is only ever part of the equation. Handpicked cotton attracts higher prices – a fact that requires the deployment of mass labor.

RFE/RL’s Turkmen service, Radio Azatlyk, reported on September 10 that teachers and high school students in Balkan province have been enlisted to harvest cotton. School employees are expected to collect 60 kilograms of the crop daily.

This work has in fact already been going on for some weeks, since before the announced start to the harvest. Azatlyk said government workers in Mary have been sent out to the fields since August. That same month there were reports that delinquent alimony debtors have been punished by being made to pick cotton.

Given how the cotton economy is organized in Turkmenistan, it is difficult to make sense of how things are being done this year. In brief, the land is owned by the state, which then rents it out to the farmers, who are forced under the terms of these agreements to mostly grow cotton. In the event of a production shortfall, however, farmers are slapped with a bill for the difference and the prospect of their land being taken away from them. This is what independent media says happened in 2019.

In normal times, farmers might have had the option of somehow overcoming some of their financial problems by traveling abroad or even within the country for precarious labor, but COVID-19 and its concomitant restrictions have put the kibosh on that.

On the foreign front, Turkmenistan is still busy dealing with the fallout of the Taliban takeover of Afghanistan. Ashgabat’s posture from the outset has been that it can work with the new people in charge.

Turkmen Deputy Foreign Minister Vepa Khadzhiyev made this point during an online ministerial conference organized by the U.S. and German governments by petitioning for what he described as multilateral interaction mechanisms.

“When we speak about the importance of creating new formats of partnership with Afghanistan, Turkmenistan stresses the need to establish effective mechanisms of multilateral interaction aimed at achieving peace and civil accord in that country," Khadzhiyev was quoted as saying by Russia’s TASS news agency.

The first step to reverting to normality, as Ashgabat appears to see it, will be for governments to recognize the Taliban government. The spokesman for what is now self-described as the Islamic Emirate of Afghanistan seemed to confirm that was forthcoming on September 13, when he tweeted that he had received greetings of congratulations from Turkmen Foreign Minister Rashid Meredov upon the formation of a new government. This will earn many brownie points.

“Abdul Salam Hanafi, the deputy prime minister of Afghanistan, thanked our neighbors in Turkmenistan and offered his assurance of Afghanistan’s cooperation and commitment to positive bilateral relations,” the spokesman wrote, concluding a six-tweet thread devoted to Turkmenistan.

Meredov, 61, might have been in touch earlier, but Azatlyk claims to have received information that he has contracted COVID-19 – a virus that Turkmenistan insists dishonestly has made no inroads into the country. The broadcaster said it had received the tip from two sources and bolstered its case by pointing to the fact that Meredov had not been seen publicly since August 20. The Foreign Ministry utterly refuted the suggestion.

It is not hard to believe these allegations, given the extent of the outbreak.

Amsterdam-based Turkmen.news turned to satellite imagery to illustrate a stark point about the spike in mortality. Images of a cemetery near Balkanabat, a town of around 120,000 people, taken in September 2019 and April 2020 show a small change in the number of new graves, indicating relatively modest levels of mortality in that area. The change seen between April 2020 and July 2021, however, is dramatic. Extrapolating that to the whole country suggests Turkmenistan has been hit hard.

The capricious way in which the crisis has been handled claims victims right and left. Azatlyk reported on September 13 that after several holidaymakers in the Caspian resort town of Awaza were diagnosed as having contracted the Delta variant, all other guests were sent home. Hundreds of hotel workers were dismissed too and, according to the broadcaster, have yet to receive salaries for August. Some laid-off workers told Azatlyk that the amount they earned getting to Awaza was more than they made over the entire vacation season.

At least the economy is growing. That is what the president says, anyway.

At the September 10 Cabinet meeting, Berdymukhamedov trotted out the fetish figure of 6.2 percent, which is the amount by which he said gross domestic product had expanded in the first eight months of 2021.

As is his habit, Berdymukhamedov then injected doubt into this narrative of high and implausibly untrammeled levels of growth by talking about the urgency for increasing oil production and making better use of refinery capacity. If performance in these important areas is subpar, the question arises as to how it is that Turkmenistan always produces unchanging GDP data.

That the figures are massaged to well beyond the point of unreality is a given. The mystery is to what extent Berdymukhamedov himself is shielded from real information by his lackeys.

That may or may not change as his son and presumed successor, Serdar, takes a more direct role in running things. In an important development on this front, Berdymukhamedov at the Cabinet meeting instructed Serdar, who is a deputy prime minister, to “analyze the economic situation” and to take charge of drafting next year’s budget.

Will Serdar be tempted to gild the lily for his father’s benefit?