President finally admits he lacks vision, but hopes his dulcet tones make up for it 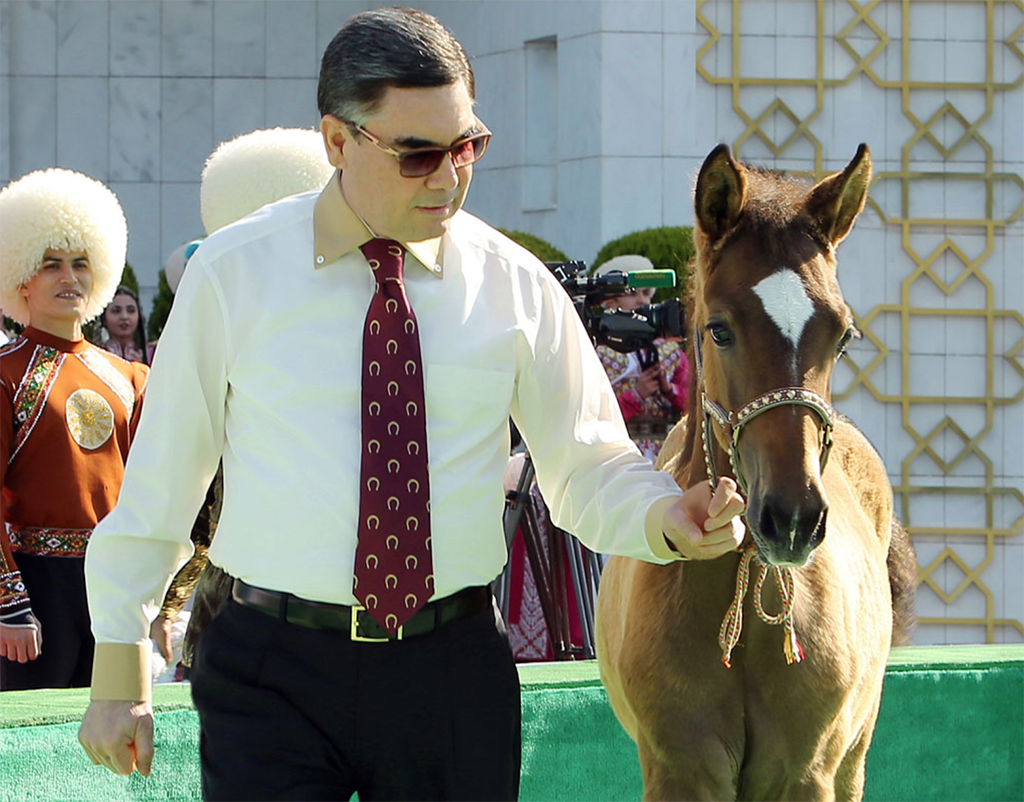 Gurbanguly Berdymukhamedov and a horse. (Turkmenistan.gov.tm)

The world once more united in derisive laughter this week as Turkmenistan’s president performed a song dedicated to his favorite horse.

For those unused to such things, the sight of Gurbanguly Berdymukhamedov decked out in shades and singing while accompanied on the keyboard by his 14-year-old grandson, Kerimguly, looks like a titter-inducing novelty. Those more habituated to these antics may well be growing weary of them.

None will be as dispirited as the regular Turkmens who have to contend with all the difficulties that life throws at them daily. RFE/RL’s Turkmen service, Radio Azatlyk, reported on April 29 that state stores have changed their rules on how much flour shoppers are allowed to buy. The limit is now a 50-kilogram sack for 50 manat ($14 at the official exchange rate) per family every two months. That quota used to be monthly.

The quality of the flour is said to poor, but people buy it to send to relatives in the regions, where it is often not available at all.

People trying to leave the country in search of respite are liable to be barred from departure and even, as foreign-based outlet Turkmen.news has reported, drafted into the army. One young man told the website that he came home from Turkey, where he is completing a university degree, for the winter holidays to see his parents. When he tried to fly out of Turkmenistan, he was denied permission to do so.

“Twice they took me off the flight,” he said. “The first time, there was no explanation. I thought it was a mistake. I somehow managed to buy an expensive ticket for a flight one week later, but the officer in passport control who put my details into the computer said that I was banned from leaving. They said this ban was imposed by the Defense Ministry and that I should go to the recruiting station.”

People with illnesses and those pursuing further studies are supposed to be exempt from military service.

Travel restrictions in general have become routine. Azatlyk reported on April 29 that dozens of people were prevented from flying to Turkey over the weekend. One woman who demanded an explanation from migration officials was dragged away by airport personnel.

Chronicles of Turkmenistan, another exile-run news website, has noted that those who do get to Turkey but are made to return often face intimidating interrogations on arrival. Turkey appears to be increasingly accommodating Ashgabat by deporting many dozens of Turkmens every month.

“Since the beginning of March, almost every Turkmenistan Airlines flight from Istanbul carries at least a dozen Turkmen citizens deported from Turkey. The Migration Service immediately puts them on lists of people banned from foreign travel for a period of up to five years,” Chronicles of Turkmenistan reported.

A delegation arriving to attend the 7th edition of the Turkmenistan-United Kingdom Trade and Industry Council in Ashgabat do not seem to have received such shabby treatment. Representatives from more than “25 leading British companies” engaged in the energy, finance, education and agriculture sectors came along to sniff out opportunities.

It is not too hard to guess what this crew might have been after.

As ever, Ashgabat – or even “Askabat,” as the head of the UK delegation, the life peer Baroness Nicholson, wrote repeatedly on Twitter – used discussions to angle for investment into its trans-Afghan TAPI natural gas pipeline project. It feels more likely that the British guests were piqued by renewed and encouraging talk from their hosts about the yet-to-be-green-lit trans-Caspian pipeline.

The British government statement on the visit could easily have been written by Turkmen state media. Toward its conclusion, it noted with satisfaction that members of the delegation had taken in a tour of a local carpet factory as, after all, “the United Kingdom is also carpet-loving nation [sic].”

Some cold water has been thrown on talk of trans-Afghan energy routes of late, however. The Taliban earlier this month reportedly cut the lines of high-voltage power cables connecting Turkmenistan to provinces in northwestern Afghanistan. Turning raw energy resources into electricity has been one way that Ashgabat has been able to overcome its lack of export routes for gas and oil.

Mohammad Tahir Azimi, a senior electricity services official in Afghanistan’s Badghis province, told TOLO News on April 24 that the militant group had for a 10-day period stopped workers from reconnecting the lines. The Taliban will apparently only agree to the cables being repaired if 20 villages under their control are also supplied with electricity. The 25-kilometer Badghis high-voltage power line was installed in July 2018 during a ceremony attended by Afghan President Ashraf Ghani.

Undeterred by such episodes, a Turkmen delegation traveled to Islamabad this week to meet with Pakistani officials for talks about the prospects for extending power lines to that country. Islamabad is said to be tempted by the competitive tariffs Ashgabat is offering.

There was potentially good energy-related news on the domestic front too. Baku-based Trend news agency cited Neutral Turkmenistan newspaper as stating that testing work has begun on a gas chemical plant outside Ashgabat. The facility is costing $1.7 billion to complete and the work is being done by Japan’s Kawasaki Heavy Industries and Ankara-based Renaissance Construction. When news of the facility’s planned construction broke in 2014, it was said it would become the “world's largest gas-to-gasoline plant.”

On a more trivial note, President Berdymukhamedov has taken to wearing glasses. This is a development of no significance whatsoever, but the state media machine evidently takes a different view and has gone out of its way to depict the president in his spectacles in as many different locations as possible. In his characteristically blinkered manner, Berdymukhamedov has adopted not just one pair of seemingly expensive, high-end models, but several, as if to further emphasize that while much of his population has very little, he has plenty.