The dictatorial regime is mostly deaf to people’s complaints, but it sometimes caves. 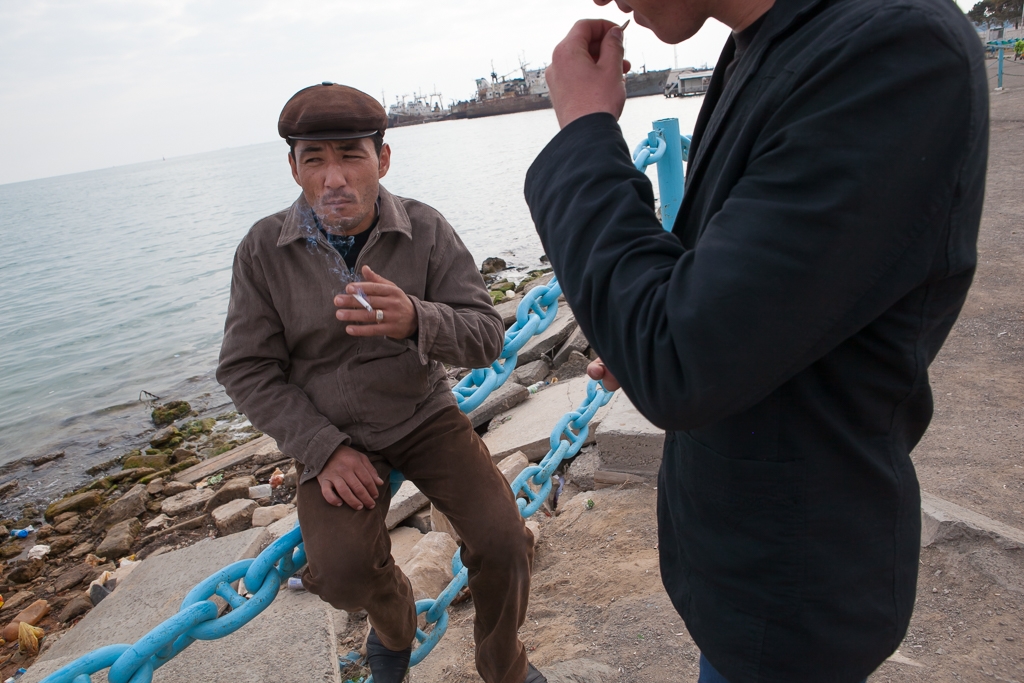 Things may be tough in Turkmenistan these days, but at least some smokers can again relieve their stress with a cheap puff.

Amsterdam-based Turkmen.news reported last week on the appearance of relatively affordable cigarettes at a couple of stores in the western city of Turkmenbashi. Packs were selling at 30 manat apiece (about $1.30 at the black-market rate), so long as buyers agreed to pick up two bottles of water too.

The cheap cigarettes later appeared elsewhere in the country, albeit for no reasons that Turkmen.news can provide.

Under President Gurbanguly Berdymukhamedov, Turkmenistan has been waging war on tobacco for the past five or so years. There are wide-ranging limitations on where cigarettes may be sold or smoked, although these restrictions have fallen short of the outright ban sometimes reported in foreign media outlets. Prices have shot up, though, as cigarettes have become harder to source. Berdymukhamedov at one stage pledged that his country will be entirely tobacco-free by 2025.

While the antipathy for cigarettes may stem from one-time Health Minister Berdymukhamedov’s fondness for clean living, it is harder to account for this momentarily blip in the opposite direction. One likely explanation is that hardened and desperate smokers have just taken to buying low-grade, counterfeit cigarettes.

Or is it possible that the authorities are trying to relieve tension provoked by the years of economic hardship? The dictatorial regime is mostly deaf to people’s complaints, but it sometimes caves.

Turkmen.news reported on October 20 that good-quality cottonseed oil materialized recently in stores in the northern city of Dashoguz. The website’s sources said this unseasonal appearance of the cooking oil occurred after several hundred people earlier in the month marched on the city administration to demand better food supplies.

Willingness to express discontent has produced results in the western town of Balkanabat too, according to another Turkmen.news account. When ATM machines ran out of cash one day in early September, the 200 or so people waiting in line took their anger to the local prosecutor’s office. On that occasion, they were successfully fobbed off. But when the incident repeated on September 25, disgruntled customers of Turkmenistan Bank headed once more to the prosecutor. This time, the impromptu protest worked, and the bank was compelled by an irritated prosecutor to resume issuing cash to depositors.

RFE/RL’s Turkmen service, Radio Azatlyk, reported on October 14 that there had been especially long lines at ATMs of late as government workers have had their salaries deposited directly to their accounts. The machines only ever contain enough money to accommodate a fraction of people in the queue, leading to fisticuffs among desperate and impatient people trying to get a hold of their money, a correspondent for the broadcaster in the Lebap province reported.

The government implicitly acknowledges cash shortages through its repeated attempts to lure people toward performing more card-based transactions. Deputy Prime Minister Gadyrgeldy Mushshikov told the president at an October 16 government meeting that there are plans for state-run and joint-stock lenders to begin providing accountholders with overdraft facilities. The size of the permitted overdraft could range anywhere between 40 percent and 300 percent of a monthly salary, according to Mushshikov.

The idea of a financially unsophisticated population being permitted to drift into contained levels of consumer debt is a stark departure from precedent for Turkmenistan. But it is not as though many people are not up to their eyeballs in some form of debt already anyway.

Consider the situation of Turkmen citizens evacuated from Russia on October 7. People desperate to get onto that flight were reportedly pressured into paying the Turkmen consulate an additional fee of more than $950. Meanwhile, Turkmenistan Airlines has raised fare prices 15-fold for internal flights, taking advantage of the fact that train and bus routes have been suspended because of a coronavirus outbreak whose existence the government still refuses to acknowledge.

And then there are the flood-stricken residents of the village of Nichka, in the Mary province. People whose homes were destroyed by the overflowing of the Karakum Canal have waited in vain since June for the government to help. Villagers told Radio Azatlyk this week that they will, as winter approaches, have to fall back on their own resources to replace roofs over houses now covered only by flimsy plastic sheets.

Such paltry concerns were distant from Berdymukhamedov’s mind on October 18, when he took a Fast and Furious-style spin down at the Interior Ministry’s motorsports center in Ashgabat.

Let it not be said, though, that the president’s love of cars means he is slacking on his keep-fit regimen. Sending something of a mixed message, Berdymukhamedov took up his walking sticks and did some gentle Nordic walking around the racing track.

Incidentally, a state news agency report that described this outing also revealed that Berdymukhamedov was supposedly the Ashgabat Greco-Roman wrestling champion in 1972, and the champion skeet shooter of the Turkmen SSR in 1973, when the leader-to-be was a mere 16 years old.

With all the guff about the importance of doing sport out of the way, Berdymukhamedov hopped into a brand-new BMW and screeched wildly around the track, capping off his display by performing donuts around a traffic cone.

Even though Turkmenistan is sticking to its coronavirus isolation, outreach to foreign investors is proceeding apace.

Economic and business ties were discussed with the Saudi Arabian Foreign Ministry on October 13. A couple of days later, it was time for the sixth Turkmen-Chinese trade and economic subcommittee meeting held within the auspices of the Turkmen-Chinese Intergovernmental Cooperation Committee. On October 16, Berdymukhamedov approved a resolution on the composition of a Turkmen team taking part in a fresh round of cooperation talks with the United Arab Emirates.

Finally, the president’s own son, Industry Minister Serdar Berdymukhamedov took ownership of October 17 consultations with the Japanese ambassador, Takahiko Katsumata. The pair exchanged views on prospects for new partnerships in the gas, petrochemical, transport, communications and agriculture sectors, among others.

Nearly all meetings with foreign dignitaries – other than those based inside the country – are necessarily conducted via video-conferencing software. This is because Turkmenistan still clings to its supposed coronavirus-free status.

But as usual, something doesn’t compute.

And Turkmenistan has reportedly begun to import medical masks from Russia, even as local media claim domestic companies are churning out over greater numbers of the protective items.