The new president cozies up to Russia. He also attempts to address food insecurity by slashing food imports. This and more in our weekly Turkmenistan briefing. 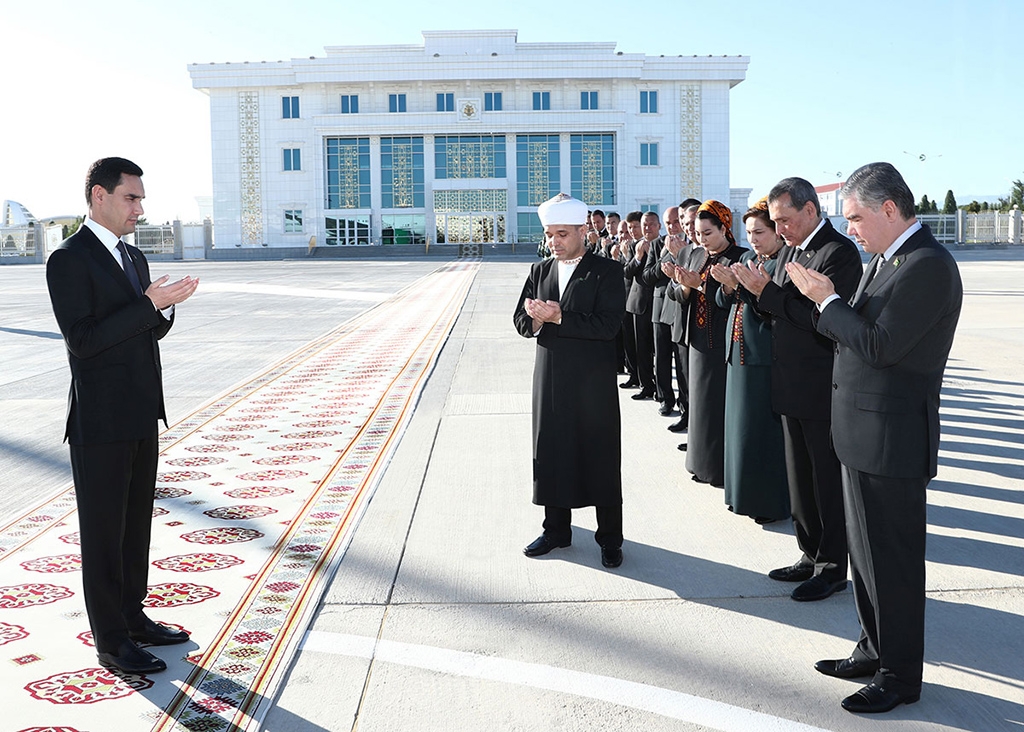 Without any advance warning, Turkmenistan’s president turned up in Mecca on June 1. This was his first voyage abroad since becoming president in March.

Serdar Berdymukhamedov’s trip to the most holy site of Islam may not have been expected, but it is entirely predictable. Asserting his religious credentials will have been a good way for the young leader, who turns 41 in September, to shore up his authority in the eyes of fellow Muslims.

Vienna-based Chronicles of Turkmenistan suggests that this means that Berdymukhamedov may, like his father and presidential predecessor, Gurbanguly, also claim the hajji title, although sticklers might insist that honor properly only belongs to Muslims who perform the pilgrimage during the holy month of Ramadan. (A slightly similar point was made in the Neutral Turkmenistan state newspaper article about this particular trip to Mecca, but government chroniclers are hardly going to quibble about claims to the hajji title).

A potentially even more consequential pilgrimage is due to occur this week when Berdymukhamedov travels to Russia to meet with Vladimir Putin. Nothing of particular use has been briefed about what exact topics will be discussed during this encounter, but the fact that it is happening at all feels noteworthy.

Russia’s isolation has reached an all-time post-Cold War high since it invaded Ukraine and only the leaders of Moscow’s closest allies and partners are prepared to be seen in the company of Putin these days. At least by making Saudi Arabia his first choice of foreign destination while president, Berdymukhamedov has slightly mitigated the impression that he is throwing in his lot with Russia.

There was a moment last month when suspicions arose momentarily about whether Turkmenistan might choose to pursue a line of strategic ambiguity at this delicate moment. On May 27, some foreign media outlets excitedly reported that Turkmenistan’s largest telecommunications services provider had ceased relaying broadcasts of Russian state-run broadcaster Rossiya-1 and Zvezda. Any thoughts that this had been occasioned by a desire to insulate Turkmenistan from Kremlin propaganda were dashed when it emerged that the problem was simply that non-Russian satellite service providers had simply stopped carrying the channels. Service has since been resumed and Turkmens may thus continue to watch jingoistic Russian coverage of the war in Ukraine to their heart’s content.

The enthusiasm for cozying up even more to Russia is pure pragmatism.

Economic ties are strong and both sides have talked up prospects of them becoming even more so. In the first 10 months of 2021, the countries did bilateral trade worth $700 million. Turkmenistan mainly imports transportation equipment and other types of machinery; it exports textiles, footwear, chemical and metal products, and foodstuffs. Reporting on full-year results in 2020, Russia’s ambassador to Turkmenistan Alexander Blokhin said last June that bilateral trade had increased by 40 percent year-on-year to reach $970 million, and that was without accounting for the trade in natural gas, which Turkmenistan also sells to Gazprom.

With the exception of China, whose interest in any event lies almost exclusively in gas supplies, nobody offers Turkmenistan quite this level of engagement.

The person-to-person links with Russia are evident to see in other ways too. As advertised, scheduled flights between Turkmenistan and Kazan, the capital of Russia’s republic of Tatarstan, resumed at the start of the month. Chronicles has reported, however, that so many people are clamoring to get tickets that Turkmenistan Airlines is struggling to cope with the applications. And this is notwithstanding the fact that one-way tickets cost more than $400.

Berdymukhamedov is convinced that trade needs a shot in the arm and he’s not happy with how the agenda is being pursued. In a typical display of Berdymukhamedovian personnel management, on June 4, he fired Chary Gylydzhov, the deputy prime minister with the portfolio for retail and trade, and replaced him with the outgoing Prosecutor General, Batyr Atdayev.

But for what has been happening this year, sticking a prosecutor in charge of trade affairs seems like an odd fit. In May, Atdayev reported to the president that a group of officials in the Trade and Foreign Economic Relations Ministry had been caught making money off state food subsidization programs. The perpetrators appropriated foodstuffs intended for sale at bargain prices and made large profits, he said.

Gylydzhov had been on his last warning since last month, when Berdymukhamedov raked him over the coals for failing to reduce the volume of imported food items like potatoes, onions, garlic, fruit, flour and oil. The idea is that Turkmenistan should be able to produce all these items itself. Gylydzhov, an absolutely hardened toady, should probably be worried that he hasn’t yet been given a soft landing in the form of another job, particularly in light of the aforementioned corruption allegations.

The question of food is clearly provoking alarm.

At the same meeting in which the reshuffle was performed, Berdymukhamedov announced that he was allocating $300 million to shore up food security in the country. Half of that amount will be provided as support to domestic food producers, while the remaining $150 million will go to the Trade and Foreign Economic Relations Ministry “for the purchase of necessary food products.”

None of this is for a moment provoking doubts that import-substitution is the way to go. The government continues to be charged with both ensuring food security, but also forever reducing the amount of food that Turkmenistan imports. This clearly often-contradictory impulse stems from Berdymukhamedov’s belief that nurturing a flourishing, diversified agricultural sector and food-processing industry is the magic bullet for tackling joblessness and enabling the prosperity of small- and medium-sized enterprises.

Alas, agriculture too keeps disappointing. At the June 4 cabinet meeting, Berdymukhamedov also delivered marching orders to Esenmyrad Orazgeldiyev, the deputy prime minister with the portfolio for agriculture. Orazgeldiyev was dismissed over the unsatisfactory “financial condition of the agricultural sector” and his inability to properly execute capital investments and key reforms. Orazgeldiyev had been a long-time fixture in the government. He held this same job from 2011 to 2016, only to lose it for an interim period, before being reappointed to the post in April 2017. Annageldi Yazmyradov, who is currently an advisor to the president on agricultural affairs, will now take over from Orazgeldiyev.

This shakeup is occurring just as Turkmenistan is starting its latest wheat harvest. Neutral Turkmenistan reported on June 7 that the harvest this year will, as usual, supposedly total 1.4 million tons. This grain will be gathered from fields stretching across 690,000 hectares (1.7 million acres). Turkmenistan cannot shake these specific figures, which are the same as those reported for 2021. Either the government is being economical with the truth and not genuinely hitting those quotas, which is very likely – or the figures are real and yet Turkmen farmers are incapable of boosting productivity despite the government’s constant boasts of yield-enhancing investment into agricultural high-tech.